‘The Young and The Restless’ Spoilers: Sharon’s Backstory To Be Expanded – Is Travis Her Brother? 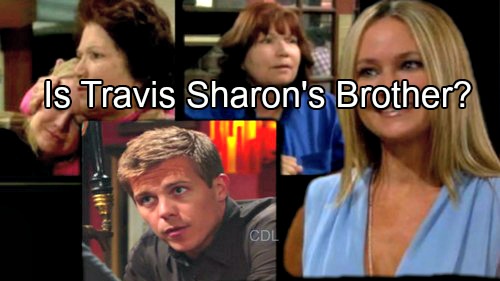 Recently, Travis Crawford (Michael Roark) was introduced to viewers as a tavern owner who caught Tori’s, aka Victoria’s (Amelia Heinle) eye. Based purely upon his physical appearance and a perceived visual plot clue, is it possible that Travis will be revealed as Sharon’s brother?

Y&R spoilers hint that Travis might not necessarily know that he has a sister, or that she’s living in Genoa City. Similarly, Sharon could be unaware that Doris Collins (Karen Hensel) gave birth to a second child later in life. Seems impossible? Hey, this is soap.

Then again, these potential siblings might not share the same mother. As devoted viewers recall, Sharon’s father was never depicted on ‘The Young and the Restless’.

The Young and the Restless visual plot clues can be used to telegraph future arcs. A number of months ago, a silver-framed picture appeared atop Sharon’s mantel, aside of other enclosed family images. The referenced old-school photo shows a gray-haired woman holding a baby.

While a completely clear view of this unidentified woman hasn’t been seen, it’s obviously not Nikki. The picture frame, which was just cleaned by Sharon last week, doesn’t appear to contain the image of an aged Hensel. So, if it’s supposed to be Doris then that character was recast.

Why would decision-makers at ‘The Young and the Restless’ hire another actor to portray Sharon’s mother, or hire whoever that person is portraying, if said individual wasn’t going to be written into the show? Take a leap of plot faith by exploring why Travis was brought into the story and it’s reasonable to consider his potential link to Sharon.

If the former Wall Street commodities broker begins exhibiting signs of bi-polar disorder viewer’s antenna will be raised higher than the helicopter landing pad on the peak of Newman Towers. The implications of this Y&R speculation transforming into truth are surely profound.

Imagine if Sharon’s backstory might finally be expanding beyond well-worn mental health issues and baby swap battles. What do fans of ‘The Young and the Restless’ think? Is Travis Crawford Sharon’s brother? Check CDL regularly for Y&R spoilers and news!