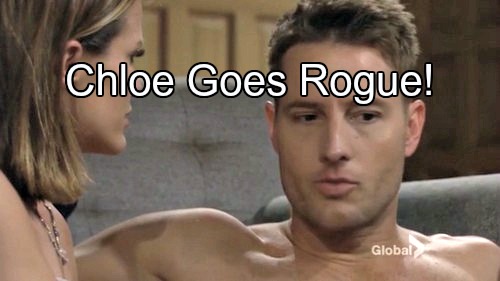 The Young and the Restless (Y&R) spoilers tease that Adam (Justin Hartley) will soon be furious with Victor (Eric Braeden) on Thursday’s episode, July 14. When the tip Dylan (Steve Burton) received doesn’t work in Adam’s favor, he’ll assume that Victor screwed him over again. Adam will be livid that Victor keeps manipulating him like this.

However, Adam may be placing the blame on the wrong person. Natalie (Mara McCaffray) will find info that points to the mystery woman’s identity. We’re about to learn who Victor’s accomplice is, but we can all pretty much guess that it’s Chloe (Elizabeth Hendrickson).

The news will certainly stun Adam once he’s finally in the loop.

Of course, Chloe could be at fault for any new evidence Dylan might have found. It seems Victor has underestimated his partner’s desire for payback. Chloe is willing to pull out all the stops to make sure she achieves true revenge. Victor may have trouble stopping this vengeful mom.

Nevertheless, The Young and the Restless viewers know that Victor always has a trick or two up his sleeve. If Victor can turn the tables on a formidable foe like Ian (Ray Wise), he can surely keep “Dorothy Gale” in line. Victor typically succeeds when he puts his mind to something.

By now, Chelsea (Melissa Claire Egan) has learned that Victor can’t be trusted. Adam’s fate is too important to leave in his father’s unreliable hands. As a result, Chelsea will decide to take action herself. The Young and the Restless spoilers say Chelsea will come up with a risky plot.

If this plan succeeds, Adam will likely secure his freedom. If it fails…well, Chelsea won’t even want to think about that. This scheme simply has to work. Meanwhile, things will get rocky for poor Adam. He’ll try to get through this crisis, but it won’t be easy.

Michael (Christian LeBlanc) will offer guidance on Adam’s next move, but there are no guarantees that anything will work out like they want. Will they be able to prove that Chloe was involved in Adam’s setup? Would Victor actually come clean for his son’s sake? It’s tough to say.

Victor obviously wants his freedom and Y&R fans are definitely looking forward to his release. How long can they really keep Victor locked up? It’s already becoming a tad monotonous. Let’s hope there’s a way to get Adam out of this mess without proving Victor is the bad guy.

We should also point out that Chloe’s stint will supposedly be a lengthy one. It sounds like she’s not headed to prison for her dirty work – at least not yet. Perhaps there won’t be enough evidence to tie her to the framing.

After all, prison visits don’t necessarily prove anything. There’s no law against meeting someone. We know what went down, but that doesn’t mean the cops will have enough to put Chloe away. Regardless, Chelsea will do everything she can to exonerate her husband.

Sacrifices may have to be made as Chelsea’s plan moves forward. Will this scheme be worth it in the end? We’ll give you updates on the intense drama ahead. Stay tuned to Y&R and don’t forget to check CDL often for the latest Young and the Restless spoilers, updates and news.