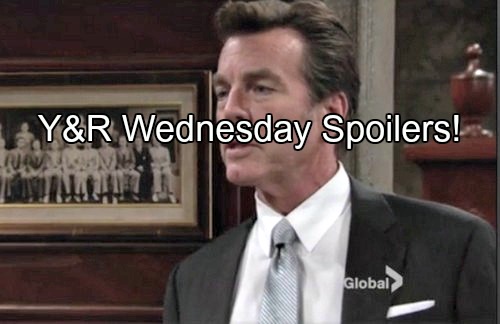 The Young and the Restless (Y&R) spoilers for Wednesday, July 13, tease that Victoria (Amelia Heinle) will give Travis’ (Michael Roark) offer some serious thought. He’ll push her to pack up the kids and set sail with him for a few months. Victoria will be intrigued by the idea, but she’ll want to get back to Travis later.

Meanwhile, Nikki (Melody Thomas Scott) will chat with Victor (Eric Braeden) at the hospital. They’ll discuss the family members who are already on board with supporting Victor in his appeal. Victor will feel like Adam’s (Justin Hartley) support could be the most important. He’ll assure Nikki that his son will back him up.

As Nikki heads out, Adam will arrive to deliver his decision. The Young and the Restless spoilers say Adam will reluctantly announce that he’s taking The Moustache’s deal. He’ll work alongside Victor and commit to him every step of the way. Victor will suggest that the genuine journal entries might turn up in the nick of time.

Adam won’t appreciate Victor’s little hint. It’s like he’s not giving Adam a flat-out promise of exoneration. When Adam returns home, Chelsea (Melissa Claire Egan) will give him updates on Dylan’s (Steve Burton) recent news. A tip came in and Dylan is going to check it out right away.

Elsewhere, Dylan will put on a pair of gloves. He’ll find a locker and pull out a large envelope. Back in Victor’s hospital room, he’ll inform Victoria that he’ll be back on the Newman throne once he gains his freedom. Victoria will accept Victor’s choice. She’ll give her father a kiss as she exits.

A woman wearing scrubs will show up in Victor’s room and he’ll be highly irritated. Victor will ask what she’s doing there. Could this be Chloe (Elizabeth Hendrickson)? Is she the one behind the tip as well? We’ll have to wait and see, but Adam certainly won’t be pleased with how things go from here.

In Thursday’s Y&R episode, Adam will be furious that Victor screwed him over again. Perhaps Victor isn’t to blame this time. Chloe could easily mess up Victor’s plans to get Adam off the hook.

In the meantime, we’ll see Victoria deflate Travis’ dreams. After having a conversation with Billy (Jason Thompson), Victoria will realize that she just can’t take his children away for three months. She can’t leave them behind either. That means Victoria just won’t be able to accept the offer.

Travis will understand, but he’ll insist that he’s leaving town anyway. He found a buyer for the bar and he has to tell Victoria goodbye. Travis will assure Victoria that he loves her. If he returns someday, Travis will hope that Victoria will save a dance for him.

Across town, Phyllis (Gina Tognoni) will tell Jack (Peter Bergman) that she’s lost her way and she just needs some time to herself. She’ll state that she’s getting a suite and taking a break. Jack will gripe about Victor being the source of their issues. He’ll feel like he should’ve been a better husband. Phyllis will contend that she’s the one who let Jack down.

Jack will spot Nikki later and he’ll immediately complain about Victor damaging his marriage. He’ll indicate that Phyllis moved out and it’s Victor’s fault for starting their troubles. After checking in, Phyllis will have an emotional outburst in her room. She’ll hurl her phone against the wall as she begins to sob.

At Billy’s place, he’ll come back home with the children. Cane (Daniel Goddard) will suggest that they should get started. They have a lot of painting to do. Victoria will arrive and approve of the color choice. She’ll decide to pitch in.

If Travis is taking himself out of the picture, it could make it easier for Victoria and Billy to reconnect. Since Phyllis seems to be inching her way out of her marriage, what does all of this mean? Will Phyllis give up Jack and lose Billy, too? Stay tuned to see what other problems Phyllis will encounter.