‘The Young and the Restless’ Spoilers: Jill Snatches Up Brash and Sassy, Pushes Victoria and Billy Together – Plan Works? 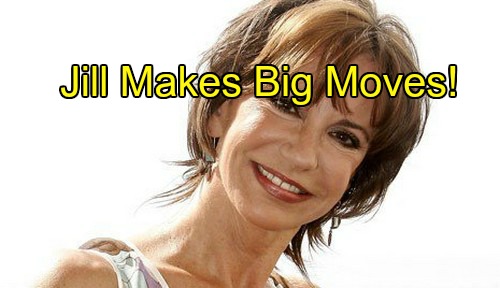 The Young and the Restless (Y&R) spoilers tease that Jill (Jess Walton) will carry out a sneaky plan. We all know Jill has no problem intervening whenever she believes she’s needed. Jill is particularly fed up with Billy (Jason Thompson) right now.

Jill feels like Billy has lost his purpose. She’s worried he’ll just keep wasting time with bimbo after bimbo. Victoria (Amelia Heinle) managed to bring out a better side of Billy and Jill is very aware of that fact. She’s positive they can put their family back together if she works her magic.

Y&R viewers know that Billy and Victoria have faced major drama over the last few months. Even the small things set them off, but the big ones really tore them apart. Billy is a schemer and it tends to get him in trouble.

Victoria was furious when Billy swiped Brash and Sassy. That was her baby and she didn’t like the idea of Billy taking the reins. It only added to the tension between them. We’ve seen some warm moments since then, but there’s still a hint of conflict.

The Young and the Restless spoilers indicate that Jill intends on changing that. She’ll want this couple to reunite so Billy can get back to living his best life. Jill will succeed in snatching up Brash and Sassy, which will undoubtedly outrage Billy.

Jill will hope that Billy and Victoria can learn to get along again. She’ll think they just need to interact more and recognize their spark. Of course, Jill has no clue that both Billy and Victoria are involved in sizzling summer romances.

Victoria gets in bed with Travis (Michael Roark) every chance she gets. They’ve had some trust issues, but they’re working through them. Meanwhile, Billy is head over heels for Phyllis (Gina Tognoni). It’s possible that Billy is simply trying to fill the void Victoria left in his heart, but his desire for Phyllis certainly seems real.

Perhaps Billy is caught in a situation that’s similar to Sharon’s (Sharon Case). Sure, Sharon loves Dylan (Steve Burton) and wants to be with him. However, a little piece of Sharon will always love Nick (Joshua Morrow) as well.

Likewise, Billy can have feelings for both Victoria and Phyllis on some level. Billy has given most of his heart to Phyllis, but he’ll never be able to give her all of it. Victoria and Billy are permanently intertwined.

Could Jill’s plot actually work? Will Billy and Victoria be drawn to each other again? We’ll have to wait and see, but this will probably get messy. Phyllis could end up devastated and alone once this storyline comes to a close. The Young and the Restless spoilers reveal that Phyllis definitely has some tough times ahead.

Will Phyllis lose both Jack (Peter Bergman) and Billy? We’ll give you updates on “Red” and her complicated relationships. There may be bad news coming up. Stay tuned to Y&R and don’t forget to check CDL often for the latest Young and the Restless spoilers, updates and news.