BY Heather Hughes on June 29, 2016 | Comments: one comment
Related : Soap Opera, Spoiler, Television, The Young and the Restless 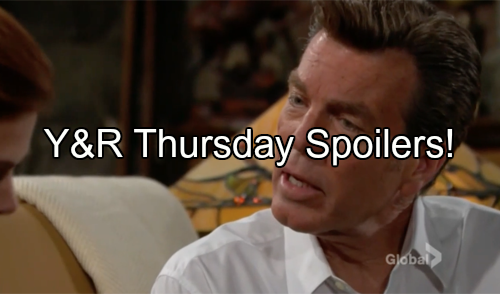 The Young and the Restless (Y&R) spoilers for Thursday, June 30, tease that Jack (Peter Bergman) will wonder why Phyllis (Gina Tognoni) wants to stay at the cabin alone. She’ll insist that she doesn’t plan on attending Adam’s (Justin Hartley) trial anyway.

Victor (Eric Braeden) will be there and Phyllis won’t want to see that smug face of his.

Jack will still seem perplexed by Phyllis’ decision to linger, but she’ll claim she just needs some peace while she recovers from her hangover. Later, Billy (Jason Thompson) will bump into Jack and learn Phyllis is by herself. He’ll head over to the cabin to ask how Phyllis’ evening with Jack went.

Phyllis won’t be pleased to see Billy, but she’ll eventually admit that he was on her mind. When pressed, Phyllis will confess that she couldn’t sleep with Jack because of her feelings for Billy. In some bizarre way, it would’ve felt like cheating.

Billy will mention that he drank and got into a brawl while Phyllis was away. This is driving him crazy. Phyllis and Billy will share some steamy kisses as they prepare to make love. Y&R viewers can expect fireworks and bold declarations in the near future.

Meanwhile, Dr. Neville (Michael E. Knight) will give Ashley (Eileen Davidson) updates on his progress. He’s found a cure for the relapsing patients, but the investigation prohibits them from using it on anybody but Hilary (Mishael Morgan). She’s their only option. Ashley will locate Hilary, who’s dealing with more tremors.

Hilary will grumble about being Dr. Neville’s guinea pig, but she’ll understand that she’s running out of time. Hilary will call Jack’s cell, which he accidentally left at the cabin. Phyllis will notice Hilary is trying to contact Jack. Later, Hilary will track Jack down and he’ll accompany her to the hospital.

Other Young and the Restless spoilers say Devon (Bryton James) will get several shocks in Thursday’s Y&R episode. Lily (Christel Khalil) will give Devon the news that Hilary is divorcing him and suing him for the athletic club.

Devon will insist that Hilary can bring it on. He’ll be willing to battle it out in court.

Lily and Cane (Daniel Goddard) will suggest there could be another way to take Hilary down. Devon will go along with their scheme. He’ll agree to talk Hilary out of the divorce if he can. Devon will plan on making Hilary believe that they can be a power couple.

Cane will fear that Hilary could stir up trouble at Chancellor Industries if they don’t stop her soon.

A short time later, Devon will discover that Hilary is in the hospital. He’ll rush to her side and promise to support her. Hilary will confess that she’s relapsing and could die if the protocol doesn’t work. Devon will state that he won’t lose Hilary to divorce or her sickness.

Hilary will tell Devon to get out and Dr. Neville will back her up. In the waiting area, Ashley will lash out at Jack for getting in the middle of this. She won’t think it’s Jack’s job to be there for Hilary. Devon can handle it. When Devon appears, he’ll rip into Jack for keeping Hilary’s relapse a secret.