The Young and the Restless (Y&R) Spoilers: Shocking Death Rocks Genoa City – Which Character is Being Killed Off? 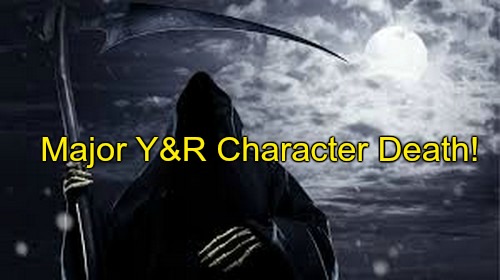 “The Young and the Restless” (Y&R) spoilers tease that Genoa City will be faced with plenty of stunning moments over the next few weeks. In an interview with KMTV, Peter Bergman (Jack) and Eric Braeden (Victor) dished on what Y&R fans can expect in upcoming new episodes.

They spilled some huge news that has everyone buzzing.

When asked if we would see any secrets revealed, Bergman noted that there definitely surprises in store. Victor’s trial will wrap up and it’s going to bring intense drama. Once we finally hear the verdict, jaws should be dropping in that courtroom.

Based on the interview, it appears Victor may be found guilty. Braeden said, “I’m practicing like El Chapo to get out of prison. I haven’t chosen the motorcycle yet.” Bergman laughed and suggested that Victor would find some way out. Braeden exclaimed, “I own the jail!”

In addition, extreme turmoil lies ahead for several couples. “The Young and the Restless” spoilers state that relationships could collapse under the weight of lies, betrayal and conflict. Jack and Phyllis (Gina Tognoni) are certainly on thin ice right now.

Phyllis will probably be moving on with Billy (Jason Thompson) soon. There will undoubtedly be other pairings splitting up as well.

Then, Bergman dropped the biggest bomb. He indicated that someone in Genoa City would lose his or her life. There was no mention of this character’s identity.

However, there have been set pictures floating around featuring cast members in dark dress clothes. If prominent Newmans and Abbotts are dressed for a funeral, it might mean that someone major is being killed off.

Could Ashley’s (Eileen Davidson) health rapidly decline? It’s possible. Some viewers have even been speculating that Sage (Kelly Sullivan) may end up dead. It would be kind of odd since the Christian reveal is coming up. Nevertheless, stranger things have happened on this show.

Of course, Patty (Stacy Haiduk) could be killed instead. She might be murdered before she has a chance to expose the truth about Sully. That could create another obstacle for Dylan (Steve Burton) and Sharon (Sharon Case) as they try to figure all of this out.

There’s also the possibility that everyone is simply gussied up for one of Y&R’s many galas. In that case, we can consider people who wouldn’t necessarily have a crowd of Newmans and Abbotts at their memorial.

Luca (Miles Gaston Villanueva) comes to mind. That pompous brat has been begging for it from day one.

Whatever happens, it sounds like this upcoming death is going to be a big deal. It’s great that Bergman and Braeden were so generous with the Y&R spoilers! Stick with “The Young and the Restless” for updates on all the devastation.

So Y&R fans, what do you think about the juicy details in Eric Braeden and Peter Bergman’s interview? Which relationships will break up? What will be the trial shocker? Who’s getting killed off?