‘The Young and the Restless’ Spoilers: Stitch and Abby’s Marriage Crumbles, Couple Divorce and Move On? 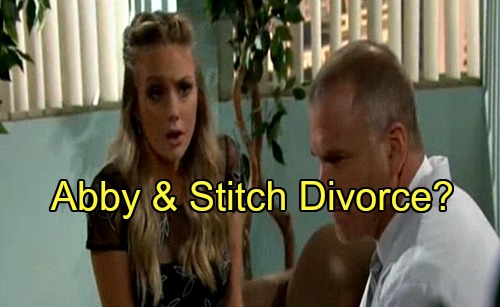 The Young and the Restless (Y&R) spoilers tease that Stitch (Sean Carrigan) and Abby’s (Melissa Ordway) marriage may be crumbling. The trouble for this couple started almost immediately after they said “I do.” Max (Jared Breeze) blamed Abby for his mother’s death and it led him to make some dangerous decisions.

Y&R viewers will recall that Max’s booby trap led to the death of his baby sister. Stitch and Abby had to deal with that loss. Plus, they had to cope with the fact that Stitch’s son had caused it. A short time later, they learned Max’s brain tumor was actually causing his evil thoughts. Stitch and Abby were left in a dark place.

Abby tried to fill the void by pushing for another baby right away. Stitch, on the other hand, couldn’t handle it. He just checked out of the situation and Abby was heartbroken. Now the roles have reversed. Stitch is ready for a new little one, but Abby doesn’t even want to think about adding a kid. They can’t even get a grip on their own relationship.

When Stitch was at his lowest, Abby tried everything to get him to open up. She knew there would be consequences if they didn’t work through their issues. After a while, Abby began to dread conversations with Stitch. She can’t connect with her husband and that’s a big problem.

The Young and the Restless spoilers state that Stitch and Abby will try to communicate again. Unfortunately, that may not be the answer either. If Abby and Stitch revisit what they’ve been through, those old wounds could tear them apart. The pain of the past may haunt them indefinitely.

Stitch and Abby’s history may be too much for them to overcome. We can’t forget that Stitch was kind of wishy-washy before his wedding anyway. Stitch was obviously harboring some lingering feelings for Ashley (Eileen Davidson). Since Dr. Neville (Michael E. Knight) is gone, maybe Stitch and Ashley will reunite at some point.

Stitch and Abby’s marriage was doomed from the get-go. This pairing has always been a bit ho-hum. The addition of Max brought a touch of interest, but now it’s back to the bland duo. Abby and Stitch seem like they were meant to be a short-lived couple. It’s doubtful they’ll be able to overcome all of the obstacles they faced.

The Young and the Restless buzz hints that Stitch and Abby’s efforts to reconnect may fail. Divorce is a very real possibility for these two. On the bright side, that would free Stitch and Abby up for other potential partners. We mentioned the idea of a Stitch and Ashley reunion. How would Abby react to that? It could be juicy stuff!

Of course, Abby could create some family drama of her own. What if Abby became interested in Travis (Michael Roark)? That might set up a sister feud with Victoria (Amelia Heinle). There are plenty of options to explore if Stitch and Abby call it quits.

Y&R fans will want to stick around for the twists and turns ahead. We’ll give you updates as more news emerges. Stay tuned and don’t forget to check CDL often for the latest Young and the Restless spoilers, updates and news.

Before joining the cast of #YR, @MelissaOrdway was a longtime fan! Episode #10137 is when she made her debut. #YR11K pic.twitter.com/mPG2eu8qi3