BY Stormy Elizabeth on May 31, 2016 | Comments: 4 comments
Related : Soap Opera, Spoiler, Television, The Young and the Restless 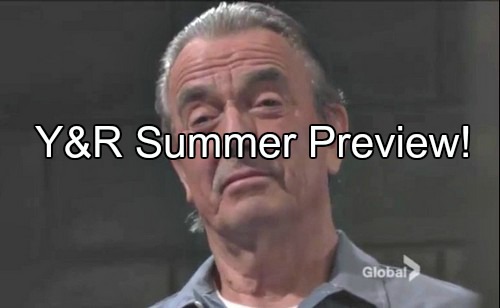 “The Young and The Restless” (Y&R) spoilers for the summer season reveal Victor changes course while Phyllis and Billy’s affair is revealed. Y&R spoilers tell us that Luca’s plans go awry, Stitch and Abby have an uphill battle with Max, while Hilary terrorizes Genoa City with her quest for power. Here’s a look at the drama to come.

Has The Moustache gone soft in his old age or does he think his family has finally paid enough for betraying him? Y&R spoilers tease that Victor Newman (Eric Braeden) has decided he wants to reunite the Newmans and help them restore themselves to their former glory.

Is this the good influence of Dr Meredith Gates (Alicia Coppola)? Also, will Nikki Newman (Melody Scott) push ahead with the divorce or is she having second thoughts? If Victor has moved on, it may not matter since Victor might make their split legal anyway.

The Young and the Restless spoilers say that Phyllis Abbott (Gina Tognoni) is playing a dangerous game. She’s trying to rekindle the spark with Jack Abbott (Peter Bergman) but can’t keep her mind off Billy Abbott (Jason Thompson). After a motorcycle accident, someone else finds out about the affair.

Y&R spoilers tease that it’s Hilary Curtis (Mishael Morgan) and she may use the dirty secret to cozy up to Jack as her own marriage to Devon Hamilton (Bryton James) flickers out. Unfortunately, other spoilers tease that Hilary may be shot soon, so she’d better rat out Phyllis ASAP!

Ashley Abbott (Eileen Davidson) has her eye on Hilary and doesn’t want her getting her claws deeper into Jack considering how nasty Hilary has been at the lab. The research initiative ends up with some twists and turns in coming weeks with Ashley determined to not let Hilary take over.

Luca Santori (Miles Villanueva) ferrets his way deeper into the Newman fold but is surprised to find that while he’s been manipulating Summer Newman (Hunter King), he’s truly fallen for her. He wants to be a Newman at all costs, but will love throw Luca’s plans off track?

Adam Newman (Justin Hartley) is desperate to prove himself innocent but he may have to get in touch with his inner “dark Adam” in order to wriggle out of the Constance Bingham murder accusations. Adam makes some choices that could cost him everything and will change his life.

Stitch Rayburn (Sean Carrigan) and Abby Newman (Melissa Ordway) have to find a way to rebuild their family with Max Rayburn (Jared Breeze) but can Abby get past what Max did to her and her baby? Will Stitch and Abby survive the return of Max to the fold?

Lily Winters (Christel Khalil) wants Hilary out of Devon’s life but will he see reason or will it take something drastic to convince Devon? Cane Ashby (Daniel Goddard) also displays ambition and Lily really digs his new power play even as she calls out Hilary for her aspirations.

Victoria Newman (Amelia Heinle) is fired up when Travis (Michael Roark) confronts her about misrepresenting herself to him and she’s ready to call it quits on the new romance. Interestingly, it may be Billy that encourages Victoria to give love a try with her new boy toy.

Kevin Fisher (Greg Rikaart) told Natalie Soderberg (Mara McCaffray) that he was ready for a relationship with her but how will he handle it when Mariah Copeland (Camryn Grimes) finds out and inevitably blows up? Plus, Kevin gets embroiled in an investigation this summer.

Looks like Dylan McAvoy (Steve Burton) calls on Kevin for help. Is this about the Adam-Constance murder mystery? Also, with Sage Newman (Kelly Sullivan) being linked to that case and the Christian paternity secret, might Kevin and Dylan find out the Sully/Christian secret?

We also know that Chloe Mitchell (Elizabeth Hendrickson) is back to make trouble this summer. Let’s hope no one lets her behind the wheel of a car while Adam is around. Chloe could further complicate Kevin’s love life particularly if she’s back with a baby, as is expected.

What do you think Y&R fans? Are you excited about the drama coming to Genoa City this summer? Share your comments below and check back with CDL often for day-ahead “The Young and The Restless” spoilers and news.