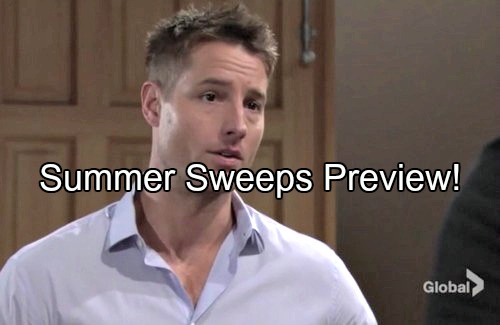 The Young and the Restless (Y&R) spoilers tease that summer sweeps will deliver some shocking moments on the CBS soap. You can expect mysteries to be solved and bombshells to be dropped. For starters, Chloe (Elizabeth Hendrickson) will make her long-awaited return to Genoa City.

Victor (Eric Braeden) could have a mess on his hands if he’s not careful. We’re assuming that Chloe is Victor’s accomplice, which means she’ll still be on a mission to bring Adam (Justin Hartley) down. Will that wreck Victor’s attempt to secure a deal with Adam? Time will tell, but it’s clear that Chloe is a wildcard.

Y&R spoilers say Kevin (Greg Rikaart) will work with Chelsea (Melissa Claire Egan) and Natalie (Mara McCaffray) as they try to sort all of this out. They’re on the verge of a breakthrough in this investigation, but the drama is far from over. Once they crack this case, another mystery will emerge. Questions will swirl throughout summer sweeps and beyond.

Meanwhile, Devon (Bryton James) will ponder how to keep his wife committed to their marriage. It won’t be easy with Hilary (Mishael Morgan) on the warpath. She’ll inform Devon that she intends on taking advantage of the fact that there’s no pre-nup.

Of course, Hilary will also continue her pursuit of Jack (Peter Bergman). She doesn’t plan on letting anything get in her way. Unfortunately, Hilary’s relapse could still present a problem. There’s no guarantee that Dr. Neville’s (Michael E. Knight) treatment will be a success.

Speaking of Dr. Neville, we’ll likely have to say goodbye to him pretty soon. What will the doc’s fate be? Will he end up going to prison thanks to Hilary’s accusations? Ashley (Eileen Davidson) is trying to take the blame, but Dr. Neville won’t let her take this too far.

Then again, maybe Ashley will get a slap on the wrist and the crisis will blow over. In that case, Dr. Neville might leave town to do his research elsewhere. We’ll give you updates as the details of Dr. Neville’s exit become apparent.

Billy (Jason Thompson) will find himself in quite a predicament when Jill (Jess Walton) pops back up. The Young and the Restless spoilers indicate that Jill will manage to take Brash and Sassy away from Billy. He should just consider this payback. After all, Billy secretly swiped it from Victoria (Amelia Heinle)!

Billy won’t be pleased, but Jill will hope this will lead to good news. She’ll do whatever she can to spark a romantic reunion between Victoria and Billy. That could happen if Phyllis (Gina Tognoni) truly decides to back off.

Nevertheless, the reveal of Phyllis and Billy’s affair is looming. We may not be lucky enough to get it during this sweeps period, but there’s always the next one. Y&R fans will just have to be patient. It should be worth the wait. Sharon (Sharon Case) will also have a couple of close calls.

There’s a chance someone else will start to get suspicious of what Sharon is hiding.

Other Young and the Restless spoilers say Nikki (Melody Thomas Scott) will pull out all the stops as she works to reduce Victor’s sentence. She’ll try to get her whole family on board, but she’s facing an uphill battle. Meredith (Alicia Coppola) will play a critical role in Victor’s situation as well. Things could get very interesting…

It sounds like summer sweeps will pack in some excitement. Which storylines are you looking forward to the most? Voice your opinion in the comments below and don’t forget to check CDL often for the latest Young and the Restless spoilers, updates and news.