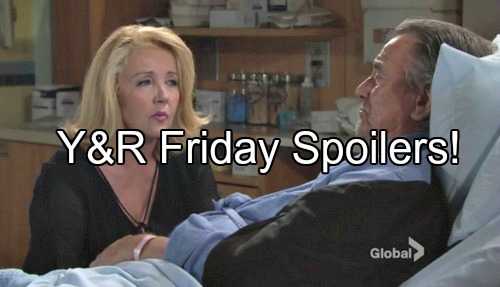 The Young and the Restless (Y&R) spoilers for tomorrow’s episode, Friday, July 8, tease that Stitch (Sean Carrigan) will have a heavy heart. He’ll feel guilty about not recognizing Max’s (Jared Breeze) issues sooner. Stitch won’t feel like he can open up to Abby (Melissa Ordway) about everything he’s going through.

Dylan (Steve Burton) will offer support and urge Stitch to give it a try anyway. Abby may understand more than Stitch thinks she will. Later, Stitch will see Abby at the hospital. They’ll try to discuss Max, but they won’t be able to get on the same page.

When Abby suggests they should take time off together, Stitch will contend that work is what’s best for him right now. Luckily, Abby will at least get to share some warm moments with Victor (Eric Braeden) in Friday’s Young and the Restless episode. She’ll visit his room for a chat.

Victor will let Abby know that he doesn’t plan on returning to prison. He’ll think it’s time to take his life back. Abby will hope Victor can get out of his lengthy sentence. Nikki (Melody Thomas Scott) will also stop by to tell Victor how grateful she is. She’ll refuse to walk away from their marriage.

After Nikki admits that she doesn’t want a divorce, Victor will confess that he doesn’t want one either. He’ll make it clear that Nikki is the love of his life. A short time later, Dylan will manage to arrange a meeting between Adam (Justin Hartley) and Victor. This heated confrontation will take a surprising turn.

Victor will give Adam the news that the real entries of Sage’s (Kelly Sullivan) journal might resurface. Vic can make it happen if Adam goes back to work at Newman Enterprises. Since Victor intends on returning to his company as soon as possible, he wants Adam there as well.

The Young and the Restless spoilers say Victor will urge Adam to consider this offer carefully. If Adam doesn’t go along with it, Victor will allow his son to land behind bars. Adam will give Chelsea (Melissa Claire Egan) updates on Monday.

She definitely won’t like this idea, but The Moustache’s help could be the only way to exonerate Adam.

Meanwhile, Sharon (Sharon Case) will be in a fantastic mood as she cooks and cleans in a frenzy. Mariah (Camryn Grimes) will be concerned about Sharon’s apparent enthusiasm. She’ll ask if Sharon is still taking her meds. Sharon will insist that she is and she feels great knowing that her secret is safe.

Kevin (Greg Rikaart) will pop in and check on Sharon, too. Sharon will promise that she’s fine and Kevin will get called to Chelsea’s penthouse. When Dylan comes home, Sharon will assure him that she’s relaxed.

Nikki will barge in and ask for Dylan’s help. She’ll be desperate to secure Victor’s freedom.

Dylan will point out that Victor’s brave actions could swing things in his favor during the appeal process. He’ll warn that a reduced sentence is the most Victor can hope for. However, The Moustache will need his family’s support. They would all have to make statements in court.

At Chelsea’s place, Kevin will revisit the security footage. Chelsea will want to find Victor’s accomplice and make sure he doesn’t wiggle out of trouble again. Adam is the innocent one in all of this.

Kevin will think he’s on the right track when the woman’s face flashes briefly. Unfortunately, Kev just won’t be able to make out who she is. Y&R buzz hints that Chloe (Elizabeth Hendrickson) is likely Victor’s partner in crime. Will Kevin figure it out soon?