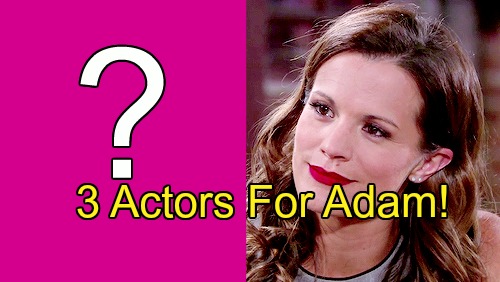 The Young and the Restless (Y&R) spoilers documented all aspects of Adam’s (Justin Hartley) apparent demise for many months. This week Melissa Claire Egan (Chelsea) was recently interviewed about the potential return of this character. While she dismissed a current reprisal, her comments logically imply that one of three actors can play Adam when he returns.

Egan chose her words carefully, which is understandable considering the position she’s in. All soap actors know not to divulge too much information to the audience, as revealing plot secrets is a major no-no. Egan also knows that there’s no telling what can happen in the future and that the word never can’t be applied to future fictional developments.

Saying that there won’t be another Adam also means that one of the actors who has played him in the past could reprise the role. If that happens Egan would have been truthful, as “…another Adam…” would not have been hired. Instead, one of three familiar faces can be seen through Egan’s words.

Chris Engen played Adam from 2008-2009. Michael Muhney took over the role in 2009 and was last seen on-screen in early 2014. Hartley then took the baton in the fall of that year and carried it through this summer.

Engen would seem to be the most unlikely choice to return. His run was brief, he left Y&R of his own volition and didn’t seem to elicit a strong audience response while working. Of course, the next choice is obvious.

Muhney remains a fan favorite. But, the actor previously noted that his on-set behavior likely caused his unexpected and highly controversial release from Y&R. While management has changed since his departure and Muhney was apparently in the running to return to the role in 2014, his future return (at any point) remains questionable.

Hartley left under positive circumstances. His acceptance of a starring role on NBC’s prime time series This Is Us, which debuts later this month, led to a voluntary departure. If his new show doesn’t succeed, Y&R surely would consider re-hiring someone who the audience embraced.

It’s also possible that if Hartley’s new gig thrives that he could return on a part-time, or even guest-basis, as soon as next spring. That assumes that he would be open to that type of offer and that Y&R would approve of what would be a planned limited run for Adam.

TOMORROW ON #YR: The Abbott Family will NEVER be the same! https://t.co/UZlEd40C1y … pic.twitter.com/Rs0nLUXNzT