The Young and the Restless (Y&R) Spoilers: Victor Stuns Nikki with Jailhouse Divorce – New Romance for The Moustache? 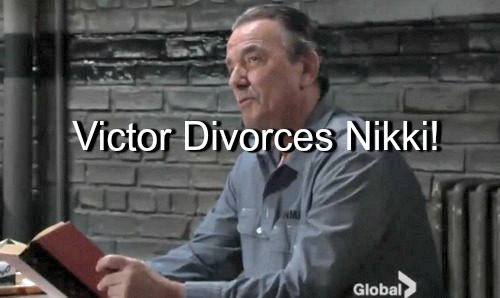 “The Young and The Restless” (Y&R) spoilers tease that Victor Newman (Eric Braeden) may soon begin to cut ties with those he feels betrayed him during his criminal trial starting with his wife Nikki Newman (Melody Thomas Scott). Will Nikki be stunned by divorce docs from her felonious hubby in upcoming new epsiodes?

In a recent interview with TVInsider, Eric Braeden said, “As far as I’m concerned, Victor should dismiss Nikki. It’s over. Done. Are you kidding me?” Braeden also indicated that he’s argued with the writers over Victor forgiving his family and said he told them, “Bullsh*t! I won’t act this!”

If Braeden gets his way – and why wouldn’t he? – The Young and the Restless spoilers say Victor may soon make the move officially split from Nikki. While Nikki feels she has acted in Victor’s best interests, he does NOT see it that way it all. Victor can’t divorce his kids, but he can certainly cut ties with Nikki.

And this would make room in the storyline for a new romance for Victor. But how could he find new love from a jail cell? Y&R spoilers tell us that a recent casting announcement gives us hope that Victor might discover love in the most unlikely of places….

Alicia Coppola has been announced as Dr. Meredith Gates, a prison physician, who touches down on Y&R in mid-April. Since we now know Victor is headed to jail, this puts him on a collision course with the gorgeous Dr Gates very soon.

If Victor and Dr Gates embark on a clandestine jailhouse romance, as a physician, she could put the wheels in motion to get Victor a reduction in his sentence for medical reasons. Surely Y&R showrunners never intended for Victor to spend too long behind bars…

How perfect would it be for him to get out of jail on a clemency plea for medical reasons and embark on a revenge gambit against his children and soon-to-be ex-wife Nikki with a hot new lady by his side? We’ve got fingers crossed that Alicia Coppola isn’t just a cameo, but a new leading lady for Victor.

Victor is not likely to forgive Nikki – not only did she side with the family against him, but she showed up to the trial and testified with boozy breath. Victor even called her out on it. Nikki has no redeeming value for Victor – she’s off the wagon and turned on him – so an impending divorce makes sense.

What do you think Y&R fans? Do you think Dr Gates could be the key to springing Victor from jail? Will the prison doc fall for The Moustache and save him from prison?

Share your comments below and come back to CDL often for more “The Young and The Restless” spoilers including day ahead spoilers.