The Young and the Restless (Y&R) Spoilers: Vote for the Hottest New Genoa City Couple – Which Fresh Pairing Do You Like Best?

BY Heather Hughes on May 19, 2016 | Comments: one comment
Related : Soap Opera, Spoiler, Television, The Young and the Restless 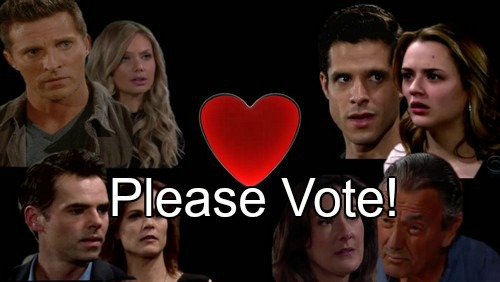 “The Young and the Restless” (Y&R) spoilers tease that love will continue to bloom for several Genoa City residents. We’ve been seeing a few romantic shakeups lately and more should be on the way soon. Let’s look at some new pairings as well as some that could be in the works. Check out the options and vote for the duo you like best in our Y&R poll.

First, we have Billy (Jason Thompson) and Phyllis (Gina Tognoni). It’s a classic tale of forbidden love. Some fans are crying foul, but others are loving every minute of the soapy drama. Phyllis and Billy are truly spicing things up. It’s hard to ignore the chemistry and intense passion they bring to the table. Billy and Phyllis will find it difficult to resist each other in the coming weeks.

Luca (Miles Gaston Villanueva) and Summer (Hunter King) are another fiery couple. “The Young and the Restless” spoilers say Luca will push Summer to carry out his scheme. That’s not great news for the longevity of this pairing, but we can enjoy the fireworks while they last. Summer was more than willing to ditch Kyle for this Spanish stallion. Luca and Summer’s relationship could be headed for trouble, but at least they look good together!

Then, we have the new woman in Victor’s (Eric Braeden) life. Dr. Meredith Gates (Alicia Coppola) started out as a pawn in Victor’s plot, but is that really all she is? We’re sensing some genuine sparks between them. Victor kissed Meredith on the cheek and she’s been getting somewhat touchy-feely. Meredith obviously doesn’t treat all of the inmates like this, so they could be on the verge of something more.

In addition, there’s a new pairing that may be on the horizon in GC. Most “Young and the Restless” buzz suggests that Abby (Melissa Ordway) and Stitch (Sean Carrigan) are headed to “Splitsville.” That might be the final destination for Dylan (Steve Burton) and Sharon (Sharon Case), too. With that in mind, Abby and Dylan could be drawn to each other. Will they bring the heat? Stick with the CBS soap for updates on what’s in store.

So Y&R fans, what do you think about these couples and almost couples? Which pairing do you like best? Do you believe any of them having the potential to last? Vote in our poll and don’t forget to check CDL often for the latest “Young and the Restless” spoilers, updates and news.