The Young and the Restless Spoilers: Week of September 5 – Genoa City Reeks of Death – Intense Grief and Painful Memories

BY Heather Hughes on September 4, 2016 | Comments: one comment
Related : Soap Opera, Spoiler, Television, The Young and the Restless 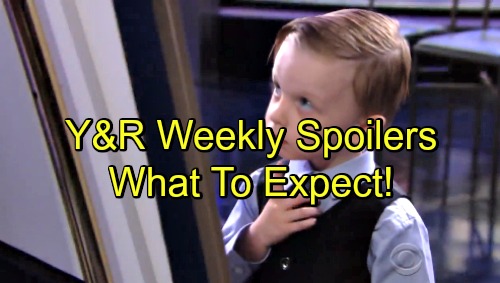 The Young and the Restless (Y&R) spoilers for the week of September 5-9 tease that tough times are on the way for the residents of Genoa City. After Chelsea (Melissa Claire Egan) receives confirmation on Adam’s (Justin Hartley) death, she’ll feel like her world has fallen apart. Chelsea will be in a state of total shock.

Eventually, Chelsea will find the strength to press on. That doesn’t mean it’s going to be easy. Chelsea will wonder how this could’ve happened. Adam fought so hard to return to Chelsea after his last “death.” They thought their love would last forever, but it all went down in flames.

As Chelsea tries to put her life back together, Victor (Eric Braeden) will reflect on this stunning loss. He’ll hate that he led to his son’s tragic demise. It appears Jack (Peter Bergman) and some of the Newmans will lash out at Victor for forcing Adam down such a dangerous path.

Y&R spoilers say Nikki (Melody Thomas Scott) will rush to Victor’s defense during the conflict. She’ll insist that Victor would never intentionally do anything to cause his son’s death. Nick (Joshua Morrow) will also side with Victor as things get heated.

Victoria (Amelia Heinle) might hold Victor responsible at first, but she’ll come around like she always does. We all know Victoria has a soft spot for her father. The Young and the Restless spoilers indicate that we’ll see some tender moments between Victor and Victoria once the family tension begins to fade.

Elsewhere, Billy (Jason Thompson) will come up with a plan to get Jill (Jess Walton) off his back. He’s had enough of his mom’s meddling. Jill has taken control of Billy’s life and he doesn’t like it one bit.

Billy could handle Jill repossessing the mansion and interfering at the company. He could even tolerate the constant push for a reunion with Victoria. However, Billy will have to draw the line when it comes to blackmailing Phyllis (Gina Tognoni). This is the last straw.

The Young and the Restless spoilers say Billy will reach an agreement with Cane (Daniel Goddard). Maybe they’ll try to muscle Jill out at Brash and Sassy. That’s not Billy’s ultimate goal, but it’s a nice start. He needs to make Jill understand that he’s won’t accept her intrusion anymore.

Next, Billy will work on getting Jill out of his romance. When Jill realizes that Billy is fighting back, she’ll make a bold move. Billy will be more outraged than ever and Phyllis will get caught in the middle of it all. It sounds like some explosive scenes are coming up.

Meanwhile, Summer (Hunter King) will have problems of her own. She’ll mull over her relationship with Luca (Miles Gaston Villanueva) and wonder how much of it was even real. Summer will determine that she needs to see Luca and hash this out.

In jail, Luca will be surprised when Summer stops by for a confrontation. Summer will be looking for closure on this difficult chapter. Will she get it? We’ll give you updates as other news emerges. Stay tuned to Y&R and don’t forget to check CDL often for the latest Young and the Restless spoilers, updates and news.