‘The Young and The Restless’ Spoilers: Who Is Your Favorite Adam Newman? 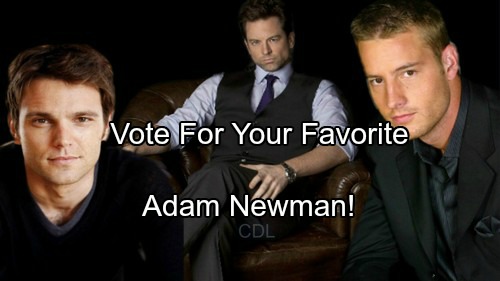 The Young and The Restless (Y&R) spoilers tease that current Adam Newman portrayer Justin Hartley might be leaving the CBS soap because his prime time NBC TV show ‘This is Us’ got picked up for Fall.

Looks like Y&R showrunners may have to cut back Adam – or possibly recast him if Hartley’s career keeps blowing up. That makes us think about past Adam portrayers – who was your favorite Adam? Vote in the CDL POLL now.

Chris Engen originated the role of Adam Newman and was a fan favorite up until he departed the show. Engen was also well-liked by cast and crew, including Victor Newman portrayer Eric Braeden. But Engen reportedly didn’t like what the writers were doing with Adam and resigned from the role leaving fans devastated at his departure.

There was a lot of turmoil around Engen’s abrupt exit from the role but he addressed it in a lengthy Facebook post writing, among other things, “I learned a great deal in my time there and I am eternally grateful for the challenges that enriched me as an artist and as a man.” Whatever his reasons for leaving the show, fans missed Engen and then had to adjust to a new Adam.

Michael Muhney fully embraced the darkness in the role of Adam and quickly became a fan favorite. As Adam, Muhney seemed to have no qualms about playing whatever the writers wrote for him which was a departure from Chris Engen’s feelings about the role, but fans loved both of them. Muhney truly made the role his own and then we lost that Adam, too.

Just as there were questions around why Engen resigned, there were questions around why Muhney was fired. Fans were outraged and understandably so. Muhney has defended himself tirelessly against the accusations made that supposedly initiated his ousting. But with Jill Farren Phelps out the door and rumors that Chuck Pratt might follow, could we get Muhney back if a recast is required?

Justin Hartley went into the role of Adam just as Muhney exited with one of the best scenes of his Y&R career – the pivotal showdown with then-Billy Abbott portrayer Billy Miller. That was top-notch work so Justin Hartley had big shoes to fill not only in terms of storyline but also because Y&R fans adored Michael Muhney. The Young and The Restless spoilers teased, at the time, that it might be a struggle.

But once again, an actor came in and made the role his own. Hartley is a fine actor and perhaps that’s why he’s been tapped for so many roles outside of Y&R. The Young and The Restless spoilers tease that the show might lose Hartley to prime time and fans will have to adjust to a fourth Adam (unless one of the prior Adams returns) We’ll have to wait and see how it shakes out.

What do you think Y&R fans? Out of these three, who was your favorite Adam Newman actor? Share your comments below, vote in the POLL and check back with CDL often for all the latest The Young and The Restless spoilers and news.