The Young and the Restless (Y&R) Spoilers: Who Shot Hilary – Is Hilary Hatred Heading For Attempted Murder?

BY Monica DelRay on May 28, 2016 | Comments: 20 comments
Related : Soap Opera, Spoiler, Television, The Young and the Restless 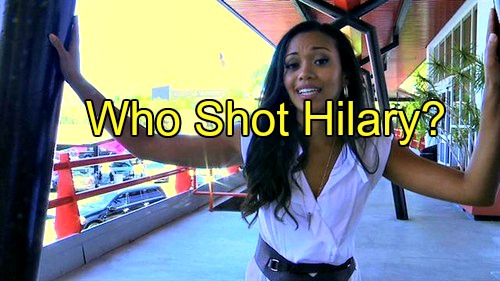 “The Young and the Restless” (Y&R) spoilers tease that Hilary (Mishael Morgan) will continue to wreak havoc in Genoa City. She loves having power and she grabs a little more of it every day. Devon (Bryton James) feels like he can keep his wife tamed and Jack (Peter Bergman) thinks she’s just misunderstood.

However, they’re probably the only two people in town who feel that way.

Everyone else is becoming increasingly furious with Hilary and her cutthroat strategies. Hilary’s incessant blackmail plots are causing a wave of rage across GC. She’s on a highly destructive path and there’s a good chance her actions will eventually catch up with her.

Since Hilary is now on just about everyone’s bad side, it’s led to some interesting social media buzz. Some Y&R viewers are speculating that the show is setting up a murder (or attempted murder) mystery involving Hilary’s comeuppance. Perhaps it could be a storyline that asks, “Who shot Hilary?” There would certainly be no shortage of suspects.

Many “Young and the Restless” characters seem like they could be capable of pulling the trigger. Just about anyone can be pushed to his or her limit. Ashley (Eileen Davidson) has clearly been fed up with Hilary’s antics and that trend will continue over the summer.

Lily (Christel Khalil) is determined to bring Hilary down as well. It’s possible that Lily could do it with a gun. Cane (Daniel Goddard) is protective of Lily, so he might be willing to do the deed or cover for her if need be. Jill (Jess Walton) got pretty ticked off at Hilary over the hospital wing and that won’t be the last time we see these two have a run-in.

Of course, Neil (Kristoff St. John) has proven that he can snap. Maybe Neil could start thinking that he should’ve left Hilary to die after she fell down that mountain. Neil’s occasional relapses make him a wild card anyway. There’s no doubt that he’d fire a gun if he was drunk.

Plus, Y&R appears to be cutting back on Kristoff St. John’s airtime. If they need to write him out for a while, he could end up in prison like Victor (Eric Braeden). Then again, that might happen anyway if Hilary chooses to blab to the police. In fact, that could be a motive for someone like Lily or even Devon to come after Hilary.

A potential affair also seems to be brewing between Hilary and Jack. Phyllis (Gina Tognoni) might think she’s the only one who’s allowed to cheat. If Phyllis gets updates on a secret romance, it would undoubtedly mean bad news for Hilary.

Could “Red” make Hilary stare down the barrel of a gun? “The Young and the Restless” might be willing to go there.

These are all intriguing possibilities to consider. There’s no guarantee that the show is headed in this direction, but it sounds like fun! Who doesn’t love a good whodunit? Let us know what you think about the idea and don’t forget to check CDL often for the latest “The Young and the Restless” spoilers, updates and news.