The Young and the Restless (Y&R) Spoilers: Will News of Phyllis and Billy Affair Sends Jack to Hilary’s Bed? 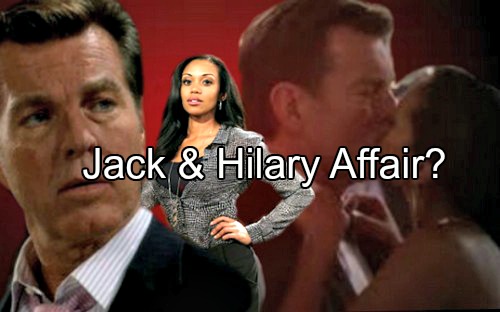 “The Young and the Restless” (Y&R) spoilers reveal that Jack (Peter Bergman) and Hilary’s (Mishael Morgan) bond could grow stronger. They’ve been sharing some heartfelt scenes lately. When Hilary’s adversaries take issue with her behavior, Jack always rushes to her defense.

These characters weren’t spending much time in each other’s orbits prior to this. That means there must be a reason Y&R is bring them together now. “The Young and the Restless” fans know that Billy (Jason Thompson) and Phyllis (Gina Tognoni) enjoyed a steamy night of passion. It’s obvious that Billy would like for that to turn into more.

We also know that the news of the affair will soon fall into the wrong hands. Hilary is certainly the resident blackmailer around Genoa City. She would love to get updates on this juicy info. It still isn’t clear what Hilary’s game is, but you can bet that Jack will be a pawn in some way.

There’s no guarantee that Hilary will be the one to learn Phyllis and Billy’s secret, but that may not matter. Hilary usually manages to get what she wants. Of course, it’s hard to say exactly what that is just yet. Besides, Hilary’s goals could begin to shift. Devon (Bryton James) feels like he can settle Hilary down, but he could become fed up with if she doesn’t start acting like a respectable human being.

If Hilary grows tired of Devon standing in her way, she might turn to Jack to satisfy her needs. Whether Jack hears about the affair from Hilary or someone else, it’s sure to sting. Will Jack decide he wants a sidepiece, too? Hilary and Jack could easily do the horizontal mambo to retaliate against their spouses.

Then again, it’s possible that true feelings are developing for Jack or maybe even both of them. Hilary may not feel a real spark, but that doesn’t mean she can’t enjoy Jack’s attention and sweet nature. Just the fact that they’ve been there for each other is a step in the right direction.

Bottom line, don’t be surprised if these two enjoy a sex session at some point. No matter what happens, the possibility is there. It’s doubtful that Hilary and Jack are going to become a hot new pairing, but a one-night stand could definitely throw their current love interests for a loop. Stick with the CBS soap to see where this storyline is headed.