The Young and the Restless (Y&R) Spoilers: Adam Forms Dangerous Alliance with Ian Ward – Team Up Against Victor 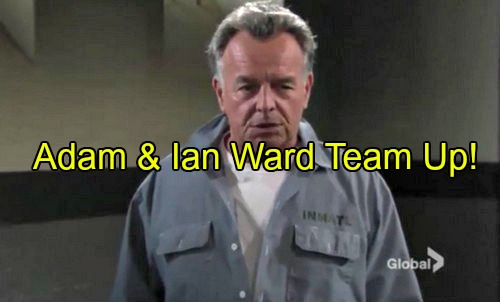 “The Young and the Restless” (Y&R) spoilers for tomorrow’s epsiode, Friday, June 3, tease that Victor’s (Eric Braeden) plan could be derailed. When Victor shows up at the prison infirmary to see Meredith (Alicia Coppola), he’ll find a male doctor instead. Victor will ask where Dr. Gates is and the new doc will reply that she’s taken a leave of absence.

This news puts Victor in a bit of a bind. Victor originally wanted to grow closer to Meredith and earn her trust. It didn’t take long for their friendship to bloom into love – at least on Meredith’s part. Of course, there’s no doubt that Victor has been enjoying their connection. He seems to like opening up to Meredith, even when he’s telling lies.

However, Meredith has apparently determined that this romance is just too much for her. It appears The Moustache is a little too hot to handle. Meredith may have decided to take a step back and clear her head. She can’t resist Victor, so staying away from him is the only solution right now.

Of course there is also the possibility that Dr. Gates is facing some sort of disciplinary action for mating with a prisoner!

There’s a good chance Meredith will be back eventually, but Victor can’t know for sure. He may worry that his scheme to get out of prison is in jeopardy. Meanwhile, Ian (Ray Wise) will be expecting a visitor. He’ll believe this showdown is long overdue.

“The Young and the Restless” spoilers indicate that Adam (Justin Hartley) won’t have much luck getting through to Nick (Joshua Morrow). He’ll have to take drastic action if he wants to keep himself out of the slammer. Adam will soon form an alliance with an enemy.

Will Adam team up with Ian? It wouldn’t be the first time these two became partners. Unfortunately, the Paragon Project came back to bite Adam. He may be wary of getting tangled up with Ian again, but he’s running out of options. Ian may be a ruthless villain, but he’s probably the only one who can truly beat Victor at his own game.

Plus, Ian undoubtedly has a lingering grudge against Victor. Don’t let that nice guy act fool you. Y&R viewers know that Ian can never be trusted. If Adam and Ian go up against Victor, they’ll be taking a huge risk.

Adam may choose to put everything on the line as he fights to prove his innocence. Will Adam’s new scheme succeed or fail? Time will tell, but he’s certainly got a tough battle ahead of him. Stick with the CBS soap for updates on the chaos to come.