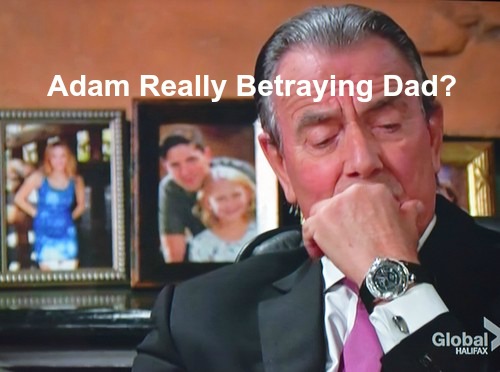 “The Young and The Restless” (Y&R) spoilers indicate that Adam Newman (Justin Hartley) once again appears to be stepping out against his dad Victor Newman (Eric Braeden) making another traitorous alliance behind the back of The Moustache.

This ostensible shift back to dark could cost Adam his marriage to Chelsea Newman (Melissa Claire Egan). In recent months, we’ve seen Adam team up with Ian Ward (Ray Wise) and then Jack Abbott (Peter Bergman) as he tried to destroy his father.

But in recent days, it seemed like Adam and Victor were finally seeing eye-to-eye and working together to revive Newman Enterprises. Perhaps if Victor had held back on his constant blackmail reminders to Adam over the Christian paternity secret, things could have gone well – but Victor is never subtle.

It seems like nearly every conversation Victor and Adam have had lately has been peppered with snarky comments and threats – and now it seems like Victor has gone too far. Victor set Adam off with his cruelty to Sage Newman (Kelly Sullivan) when he knows she’s grieving her son.

But is Adam plotting behind Victor’s back – or is this move also part of Victor and Adam’s master plan to take down the Santoris and get them out of Newman Enterprises once and for all? Victor already has Noah Newman (Robert Adamson) playing a dual role in this plot.

Victor has Noah acting the “idiot grandson” role (not difficult for Noah!) so that he can get close to Luca and Marisa Sierras (Sofia Pernas) and undermine them. They are unsuspecting because they see him as a disgraced Newman about to lose his job at any moment.

Has Victor sent Adam to make a bargain with his enemy so Adam can also work against Luca from the inside and learn Santori criminal secrets? Or is Adam really making a deal with the devil he doesn’t know to try and take down his father, the devil he does know?

Is this another big move by Adam to get revenge against Victor? And even if Adam is secretly doing Victor’s bidding, it will look to Chelsea like Adam is up to his old tricks of revenge and dark dealings. Will Adam confide in her and tell her that she shouldn’t be worried and trust his plan?

If Adam isn’t teaming up with Luca at his father’s insistence, he has to know that Victor will blab the truth to Chelsea that Sage’s dead son Christian was Adam’s offspring. With Chelsea planning another pregnancy, it would hurt her that Adam has hidden the truth for so long.

What do you think Y&R fans? Is Adam making a deal with Luca at Victor’s behest? Or is Adam truly looking for a new partner in crime to take down Victor?

Share your thoughts in the comments below and check back with CDL often for more “The Young and The Restless” spoilers and news.