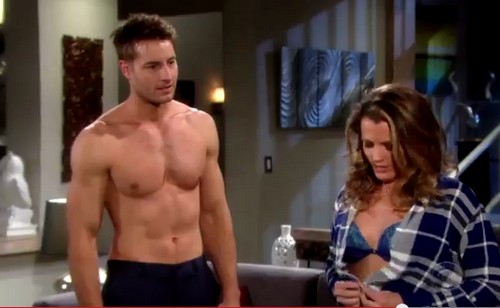 “The Young and the Restless” spoilers for Monday, April 13, tease that Y&R relationships will start to shift in Genoa City. Cane (Daniel Goddard) and Lauren (Tracey E. Bregman) will show up at the hospital to see Michael (Christian LeBlanc). When Lauren questions why he didn’t tell her he wasn’t feeling well, Michael will get snappy as he tends to do these days. Lauren will leave the room and Michael will open up to Cane about the situation. Michael will say he feels like he can’t talk to Lauren about what he’s going through.

Meanwhile, Avery (Jessica Collins) will scream after Joe’s (Scott Elrod) tumble and Lily (Christel Khalil) will run to see what’s wrong. Avery will tell Lily to call an ambulance before rushing to Joe’s side. The paramedics will strap Joe to a stretcher and take him to the hospital for emergency surgery. Paul (Doug Davidson) will take Avery’s statement and she’ll say that she accidentally pushed Joe off the balcony when he tried to kiss her. At the hospital, Avery will have flashbacks of talking to Joe and the doctor will give her the news that Joe might not walk again. The main focus is just keeping Joe alive. Later, Avery will admit to Michael that she’s responsible for Joe’s fall. Michael will be curious about why Avery was alone with Joe and he’ll worry that telling Paul was a mistake.

Summer (Hunter King) and Kyle’s (Lachlan Buchanan) cozy moment will be interrupted by a knock at the door. Noah (Robert Adamson) will be looking for Summer’s help sorting through Courtney’s (Kelli Goss) belongings. Since Kyle will answer the door in his underwear, Noah will get the hint that Summer’s grieving period is over. Noah will lash out at Kyle for using the situation to get Summer in bed, but Kyle will stand up to him. Later, Summer will gaze thoughtfully at a picture of herself with Austin (Matthew Atkinson).

Other “Young and the Restless” spoilers reveal that Sharon (Sharon Case) will face more questions from Dylan (Steve Burton). Dylan will want to know how Sharon’s fingerprints ended up on the murder weapon, but Sharon will indicate that she wouldn’t ask him to go look for it if she used it. Sharon will be convinced that she’s being set up and she’ll say that she needs Dylan to be on her side. After all, if Dylan doesn’t believe her, Sharon won’t have anyone who supports her. Dylan will eventually come around to the idea that Sharon is being framed. Unfortunately, that still leaves them with the mystery of how her fingerprints ended up on the tire iron.

When Dylan gets a call from Avery about Joe, he’ll tell Sharon to head home and wait for him. Dylan will lock up the lab results for safekeeping in Avery’s office, but it looks like Sharon will make a return visit. Noah will wake Sharon up on the couch and she’ll have no memory of where she was. Sharon will tell her son about the other driver she saw and the fingerprints on the tire iron. Noah will be upset that Sharon kept it all a secret. Summer will walk in and accuse Sharon of killing Austin and Courtney. Sharon will try to grab Summer’s phone when she threatens to call the police. Noah will say they can sort all this out, but it seems Sharon will have other plans. Later, she’ll call Dylan from her car to tell him goodbye. Y&R rumors say Sharon’s arrest is coming soon so it sounds like she won’t be on the run for long.

Back at the hospital, Dylan will call Joe a snake for trying to kiss Avery, but she’ll argue that he didn’t deserve this. The doctor will give Avery updates on Joe’s condition and Avery will lean in by Joe’s bedside. As Dylan watches from a distance, Avery will say that she intends on making it up to Joe. Stick with the CBS soap to find out if the accident will bring Joe and Avery closer.