‘The Young and the Restless’ Spoilers: Will Victor’s Evil Backfire – Is The Mustache Trapped In A Web of His Own Intrigue? 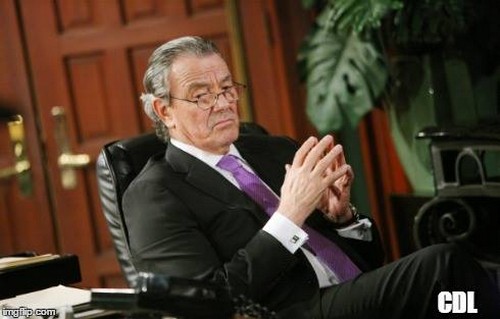 The Young and the Restless spoilers examine how Victor Newman may be hoisted by his own petard as his many schemes on Genoa City’s residents get out of hand. Y&R counts Victor as an arch plotter and manipulator but just how many irons does Victor have in the fire right now that we know about? Could Victor get burned by one or more of those irons…. You know what they say about revenge being a double-edged sword.

The road of Victor’s current path of destruction started with Victor trying to keep Nicholas and Sharon from remarrying. If these two lovebirds would have just broken up like the controlling Victor Newman wanted Sharon would not be in the mess she is in now!  Victor knew Sharon was keeping a damning secret that only Phyllis knew so The Mustache found Doctors that would bring Phyllis out of her year-long coma so that she could reveal Sharon’s dirty deeds.

Young and the Restless fans recall that Phyllis showed up to Sharon and Nick’s wedding just in time to ruin the ceremony. Phyllis eventually revealed Sharon’s awful secret, ultimately breaking Sharon and Nick up. Victor’s plan worked. But is Victor finished with revenge on Sharon? I don’t think so! Sharon burned down Victor’s beloved Ranch and has made his son miserable… there will be more in store for Sharon.

Victor helped create a wedge between Phyllis and Jack as he moved Phyllis into his home to keep her close to get under Jack’s skin. Victor stole Jabot’s top secret product “Hex, the love potion.”  Ashley and Victor “seem” to be at war over his thieving which he denies and eventually gives back but not without duplicating the chemical formula first.

Next Victor meets up with Kelly Andrews and he gets her on board to bring Jack down in return for what she wants and that is “Jack!” With his next plan in motion Victor sends Kelly to the Underground on Valentine’s Day where Jack and Phyllis just had a big blow up fight. Kelly shows up and consoles a very upset Jack when all of a sudden Jack’s persona changed within minutes and they rip each others clothes off in the utility room and hot sex follows. It was as if Kelly used Jabot’s Hex on Jack. When the romp was done they opened the door and there was sister Ashley seemingly surprised at what transpired. Jack tells Ashely to forget about it and walks away. This incident has Victor’s slimey paws all over it – after all Victor did steal Ashley’s love potion Hex and he could have easily had Kelly use it on Jack setting him up for this unexpected sex-capade.

Shortly thereafter the Underground roof caves in, the one catastrophe I cannot blame on Victor! Jack and Victor are stuck under all of the rubble, Jack is dying and in need of CPR the only person that can save him is Victor. Victor administers CPR and saves his archenemy’s life. Next stop the hospital where Jack and Victor are forced to share a room. Jack’s son Kyle stops by for a visit with his dad but ends up having a conversation with Victor… these two seemed like they were going out of their way to make it clear they have Not had contact since Kyle left Newman enterprises years before. Kyle tells Victor he has grown up now and that he is sorry for what happened between them before. Usually when people profess too much it is because they are guilty of something.

Next step for Victor: free Phyllis of all attempted murder charges of Kelly. Victor has Kelly Andrews admit to the police that she poisoned herself, he tells her he will get her out of jail and to just do as he says. Kelly is arrested and makes bail. Victor made plans with his confessional buddy to get Kelly out of dodge but Phyllis throws a wrench in the plans when she finds out Kelly made bail she confronts her. Kelly knocks her over the head with a champagne bottle. Kelly shows up on Victor’s doorstep and they make new plans for her escape.

Next step: Victor has Kelly call Jack and tell him she is going to kill herself that she has nothing to live for.  Jack believes her and next thing you know Kelly is “supposedly ” dead on a slab at the morgue. Who helped Victor set that up? Someone with ties to the morgue? Detective Harding?

Victor said to the mysterious person in the confessional that “no one can know that they know each other.” Is Sage Warner part of Victor’s diabolical plan to bring Sharon down? Sage has now landed Nicholas Newman and given up the Bingham inheritance she and Gabe have been trying to get their hands on. Why would Sage give that inheritance up since everything she has done up to this point has been to get her hands on that money? Could she and Victor be working together? Is Victor paying Sage a pretty penny to keep Sharon and Nick apart?

Detective Harding has access to the morgue, to fingerprints, stalking, setting people up and Victor refers to going to meet up with his P.I. – Detective Harding could very well be Victor’s P.I., after all where has Harding been of late? There has been no sign of him at the station where he used to practically live. Harding was basically Paul Williams right hand man so where has he been? Hanging out in the confessional with The Mustache and spying on the cabin gang? It is becoming increasingly clear Harding is living a double life, one of which even Victor Newman might not be aware.

Next phase Victor makes it clear he is going to take over Jabot cosmetics and he will stop at nothing. He and Ashley have been seen butting heads a lot after he stole her top secret one of a kind scent, but are they really butting heads or is it for show? Nothing is ever as it seems on a soap. Note: Victor brought up the fact that Ashley is not a real Abbott… she is very rattled by the conversation. That secret has been kept for 20 years and two of the handful of people that knew are deceased, John Abbott and Katherine Chancellor. Is this part of his master plan to obtain Jabot or just a red herring to throw the viewers off?

Next on the list is the “the fingerprint fiasco!” Jabot has been hacked and now it is all out war between Newman and Abbott but Victor “claims” Newman Enterprises was hacked too. Victor claims he lifted fingerprints of the culprit from Newman Enterprises. He tells his wife Niki that it had to be someone on the inside because there is only one special key to get into the room at Newman Enterprises. Do you believe Victor was really hacked or is it a lie to make people thing he was a victim along with Jabot? Are the fingerprints Jack Abbott’s? Was Victor going to have his confessional partner in crime place Jack’s prints somewhere incriminating? Perhaps somewhere near the crime scene of Kelly’s murder and set Jack or someone else up for murder like Sharon?

It seems that Victor’s revenge is focused on two people and he has the ball rolling on both victims. Victor has been setting the Jack Abbott disaster in motion longer than we all know. Are all of the things Victor has done in the last 6 months tied to bringing Jack and Sharon down?

Nick won full custody of his and Sharon’s daughter, Faith. Sharon has not been happy about it so she finally uses something in Nicholas’ past to blackmail him for more time with her daughter. Something Summer’s “dead ” husband found out about and recorded from Sharon’s own scandal-mongering mouth. Shortly after that Austin is found dead. Summer and Kyle accuse Sharon of killing Austin and Kyle even writes a lipstick message at Sharon’s telling her he knows she is killing people. Kyle is joined to Summer at the hip, why? He has a motive and we need to figure it out.

Just recently Cop Courtney ends up in the same armoire dead. Did she see that Detective Harding have a deep dark sinister side, yes! He is the only person M.I.A. during all of the havoc being wreaked in GC INCLUDING the Cabin Killer crimes. As you previously read on CDL Harding has motive for knocking off Austin, he had a problem with that little punk from the beginning after Austin shot commissioner Williams. Harding always had a problem with Courtney – never thinking she was good enough to be a cop but maybe Courtney figured out he was the guy on Austin’s surveillance tapes and he knocked her off! Harding just snapped!  Harding also had a problem with Abby and Kevin, and Abby did end up with a concussion in the park after being hit on the head. A crowbar with Sharon’s fingerprints was recently found close to the Abbott cabin , BUT we still do not know if that is the weapon that was used to kill Austin. Yet The Young and the Restless spoilers reveal that Sharon is going to be arrested for the killings .

Victor Newman is relentless with people he hates and Sharon and Jack are at the top of that list. Victor is working with some very unsavory characters which in the end may be lead to his undoing. All of these evil plans that Victor has masterminded will tie together in a perfect package soon that may very well leave Victor holding the bag. One thing for certain is that all of these Y&R characters, both the victims and perpetrators, are tied in with Victor Newman’s revenge plans for Sharon and Jack. Victor’s dirty deeds spill over into other’s lives with a domino effect. But could the last domino to fall be Victor Newman’s? Has Victor unleashed people with a greater capacity for evil and violence, like Detective Harding, Kelly, or maybe even Sage, than he realizes?  Will Victor’s own life wind up in danger before his macabre plot reaches its conclusion?

Y&R rumors have it we will find out who Victor has been talking to in the confessional in April and the great news is May sweeps are just around the corner and we will hopefully get more clues to all of these unanswered questions soon. Come back to CDL often for more The Young and the Restless spoilers and updates!