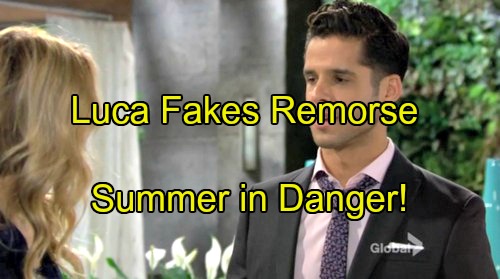 The Young and the Restless (Y&R) spoilers warn us that on today’s episode, Wednesday, July 20, Luca can’t be trusted and is faking his show of remorse by putting Summer’s interests first. Summer (Hunter King) is a trusting soul. Time apart from Kyle (Lachlan Buchanan) allowed Luca (Miles Gaston Villanueva) an opportunity, which he took advantage of on ‘The Young and the Restless’.

However, now that Summer’s perceptions have been altered, she needs to be careful where her newest boyfriend is concerned or she could easily get burned personally and professionally.

It does seem that Luca has sincere feelings for Summer. Y&R showed us that he did for Marisa (Sofia Pernas) and they had a child together. But The Young and the Restless spoilers hint that Luca currently using a family angle to cover his actions. In this instance, he’s pointing to Newman pressure, whereas with Marisa he blamed Santori influence, especially that of his father.

In recent months viewers were shown information on Y&R that clearly seemed to indicate that Luca was either orchestrating, or was connected to, problems at Newman Enterprises. Fans of ‘The Young and the Restless’ also know that he was working with Victor (Eric Braeden) in some capacity. Yet, like Summer, they can’t say definitely that Luca is a total sinner.

A dilemma will be created as Luca offers to step back from the company so that Summer can take the helm. If she cuts ties with Luca it would be harder to gather evidence, or prove, whatever nefarious activities he’s been involved in to-date. On the other hand, if Summer remains connected to Luca she might be playing into his hands.

Of course, it’s also possible that Luca is somewhat innocent, in which case Summer would jeopardize her romantic connection on ‘The Young and the Restless.’

Victor initially requested the Santori family’s money when Newman was in a crash crunch. There was no doubt that Luca was serving as his father’s proxy from the jump. After Victor eventually forced the Santori’s out of his company, Luca claimed that he had a falling out with his father and was going to stay in Genoa City.

Luca quickly turned Summer’s head and surely was using that personal access to keep a foothold in the corporation her family owns. However, he may have also developed genuine feelings for Summer along the way. So, it’s possible that the game Luca’s been playing could create unexpected consequences for him as well, or already has.