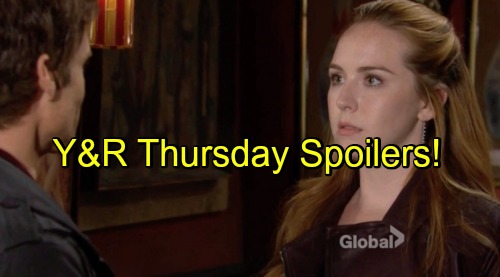 The Young and the Restless (Y&R) spoilers for Thursday, October 6, tease that Kevin (Greg Rikaart) will be surprised to find Mariah (Camryn Grimes) walking out of Hank’s bar. He’ll nearly run into her as he’s rushing inside. After a moment, Kevin will realize that this is a peculiar coincidence. He’ll wonder what Mariah is doing there.

Mariah will look like a deer in headlights as she scrambles to come up with an excuse. You’ll almost be able to see those wheels turning in Mariah’s brain. Y&R fans know Mariah is a smart cookie, but this is definitely a sticky situation. She’ll have to think fast if she wants Kevin to buy what she’s selling.

Perhaps Mariah’s best option is to say that she came to check things out. She might claim that she wanted to help investigate. Mariah has been hanging around Kevin and Dylan (Steve Burton) as they try to solve the mystery. She could argue that she knew the repairman was working at Hank’s, so she decided to take a look around.

Of course, Mariah actually went to drop off the phone that Patty (Stacy Haiduk) gave Sharon (Sharon Case). She’s doing everything she can to cover up Patty’s ties to the constant calls. Regardless of what Mariah says, she’ll hope that Kevin believes it. Sharon probably can’t handle someone else pushing for the truth.

Meanwhile, Abby (Melissa Ordway) will have a deep conversation with her mother. Ashley (Eileen Davidson) will ask how Abby’s relationship with Stitch (Sean Carrigan) is going. She’s aware that they’ve been struggling lately. Ash will want to find out if they’re back on track.

Abby will somberly declare that they’re working on their problems and their marriage in general. The Young and the Restless spoilers say Ashley will note the sadness in Abby’s voice and overall demeanor. She’ll wonder why Abby isn’t happy about trying to fix what’s broken.

It appears Abby already knows what’s wrong with her relationship. She still cares about Stitch, but she doesn’t seem to be in love with him anymore. Abby realizes that marriage takes work, but something feels off.

After everything they’ve been through, there’s just no romance left. Abby may not think they can ever recapture what they once had. She might feel like she’s giving Stitch false hope by pretending they can overcome the obstacles.

Elsewhere, Travis (Michael Roark) will fear that his own romance could be in trouble. He’s about to rock the boat with Victoria (Amelia Heinle), but it’s something that must be done. The Young and the Restless spoilers say Travis will have confession to make. He’ll approach Victoria and admit that he hasn’t been completely honest with her.

Victoria will be stunned by the news that Travis has been lying to her. Y&R spoilers indicate that Victoria will get updates on some secrets from Travis’ past. She won’t like what she hears, but Travis’ lies will be the bigger issue.

Can Victoria forgive Travis for his deception? Will she ever trust Travis again? Time will tell, but it’s clear that this will be a major snag for this couple. Stay tuned and don’t forget to check CDL often for the latest Young and the Restless spoilers, updates and news.