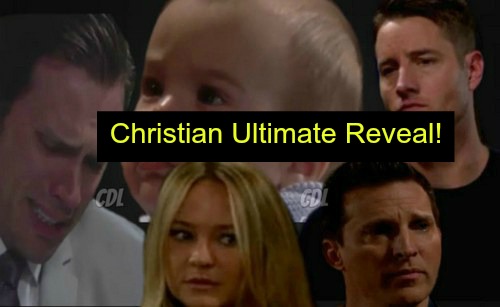 The Young and the Restless (Y&R) spoilers tease that Sharon’s (Sharon Case) secret could be on the verge of getting out. Even if Sharon manages to keep Patty (Stacy Haiduk) quiet for now, there’s no guarantee that her silence will last. Patty knows a juicy secret and she clearly wants to spill it.

There are many layers to the big reveal that’s looming. No one in Genoa City has all the pieces of this puzzle just yet. Let’s consider how this might go down. First, the fact that Sully isn’t Sharon’s baby will be divulged. That should quickly bring us to the next bombshell of this storyline.

Sharon realizes that Sully is actually Christian and she assumes he belongs to Nick (Joshua Morrow). It should be interesting to see if Sharon promptly comes clean or tries to play dumb. Regardless, Dylan (Steve Burton) will eventually learn that Sharon has been keeping all of this from him. Patty may make sure of that.

Both Dylan and Nick will be incredibly hurt that Sharon has been hiding this crucial info. Sharon should know better than anyone that you never get over the pain of losing a child. She kept her mouth shut as she watched Nick suffer, but he’ll soon expect a detailed explanation.

Sharon also denied Sage’s (Kelly Sullivan) last request. As Sage faded away, she begged Sharon to tell Nick the truth about his son. If Sharon had just explained immediately, she would’ve been an innocent victim. Sharon was targeted by crazy Dr. Anderson (Elizabeth Bogush) and she couldn’t help that.

Unfortunately, Sharon chose to hide the secret and even dragged Mariah (Camryn Grimes) into this mess. You can bet that Mariah will get an earful if Dylan and Nick figure out that she was in on it. Nick may try to take Christian away from Sharon entirely – at least until his anger dies down a bit.

After that, Nick might reconsider since Sharon is the only mother the baby has ever truly known. Christian has to come first in this scenario. They need to do whatever they can to raise Christian in a healthy and happy environment. That’s not going to be easy in the midst of the upcoming crisis, but they have to try.

Here’s where it gets even trickier. The Young and the Restless spoilers say Nick and Chelsea (Melissa Claire Egan) will continue to grow closer. Nick will give Chelsea updates on Sharon’s deception once it’s revealed.

He’ll be stunned that Christian has been right under his nose the whole time. Nick will feel cheated, but another secret will take center stage.

Will Chelsea decide that what Nick doesn’t know won’t hurt him? Chelsea believes Adam Newman (Justin Hartley) is dead, so there’s no need to say anything. She wouldn’t want to cause any more heartbreak for Nick or even Christian down the road.

It would be nice for Christian to believe that his real father is alive and well.

Of course, many Y&R fans expect Adam Newman to return from the “dead” sooner or later. If that happens, this Young and the Restless storyline could explode again as Adam claims his son from Nick! We’ll keep you posted as other news comes in. Stay tuned to Y&R and don’t forget to check CDL often for the latest Young and the Restless spoilers, updates and news.

Tomorrow on #YR: Should Jack give Phyllis another chance? pic.twitter.com/EqzJavKlIl