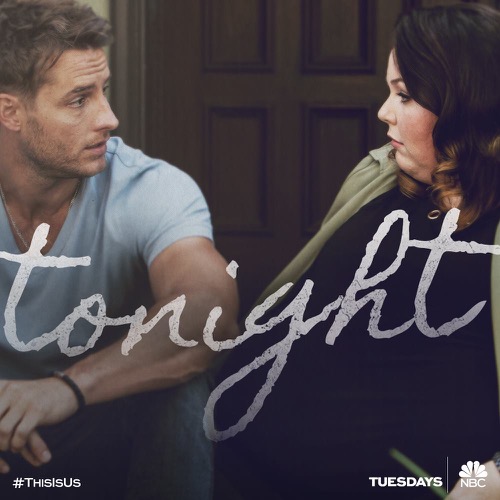 Tonight on NBC their new honest & provocative dramedy series This Is Us premieres with an all-new Tuesday, September 27, 2016, episode and we have your This Is Us Recap below.  On tonight’s This Is Us season 1 episode 2, Rebecca (Mandy Moore) and Jack (Milo Ventimiglia) begin to feel distant from one another; and Kevin (Justin Hartley) faces the consequences of quitting his job.

Did you watch last week’s This is It premiere where we found that several of the characters  shared the same birthday and so much more than anyone would expect?  If you missed it we have a full and detailed recap, right here.

On tonight’s This is Us premiere episode as per the NBC synopsis, “Kate (Chrissy Metz) is furiously working hard to shed her unwanted pounds as she continues to struggle with impatience and discouragement. She receives support from her new boyfriend, Toby (Chris Sullivan), as he helps her let loose and enjoy herself. Beth (Susan Kelechi Watson) begins to question the motives of Randall’s (Sterling K. Brown) biological father, William (Ron Cephas Jones), and takes action in getting answers on his activities.

So make sure to bookmark this spot and come back between 10PM – 11PM ET! for our This Is Us recap.  While you wait for the recap make sure to check out all our This is Us recaps, spoilers, news & more, right here!

This is Us Episode “The Big Three” starts with Rebecca getting the kids ready for school, making them breakfast. The cereal is on the table and she tells the three kids to eat their food. Kate walks to get something else to eat, but her mom stops her saying, “Baby, we talked about this!” As Kate is about to eat, their father, Jack, comes in, kisses Kate on the forehead, looks at her cereal and says, “Yuck!” and he dumps some Fruit Coloured O’s on top of it.

Jack shares a special saying with his kids. He tells them “deep breaths and, first came…” Kevin responds, “Me!” “And Dad said…” “Gee”. “Then came…???” “Me!” says Kate. “and Mom said…” “Wee” replies Kate. Jack continues, “And then came???” Randall responds, “Me!” Jack smiles and says, “That’s 3!” They all then knock their chests and chant “Big 3”. Rebecca smiles but things don’t seem right.

Once Jack is gone, Rebecca begins to harp on Kate about eating all the fruit please. It’s sad to see, that it was her mother who started her insecurity about her weight. The show skips forward to 2016, we seen Toby working out with Kate, but he keeps her spirits up about losing weight. Rebecca continues to push a “healthy” lifestyle on a very young Kate. She also battles that Kevin is also being bullied because he is brothers with Randall.

Jack is out having a drink with a buddy Miguel, and he admits that Randall is having a hard time being picked on a school, being called “Webster”, like the TV show, where the black kid that white couple adopts on the show. Jack is venting about Rebecca, and his best friend tells him to smarten up, that Rebecca deals with a lot and Jack so be happy he married someone so much better than him.

Rebecca and Jack finally talk, when he comes home inebriated with an expensive gift for her. She tells him that the drinking needs to stop and he needs to fix it, that when he isn’t drinking he is a 10. Rebecca wakes up to find Jack sleeping in the hallway, and she asks him what he is doing, he admits that he doesn’t like sleeping far away from her. He reveals he didn’t know what he wanted to be until he was 28, when he met her. He recommits to his marriage and tells her, he is going to be a “12” for her.

When jump forward to current time, Randall is in bed with his wife, and she says she needs to ask him something but doesn’t know how to say it. He tells Beth that they have been together for 17 years, and censorship between them has never been an issue, so she asks why how long his crack-addict father, William is going to be sleeping in their daughters’ bedroom.

Randall and Beth haven’t told their daughters the truth about his father yet, and Randall is rationalizing keeping him there because he wants to get him to the Doctor’s office to see what is going on. Beth agrees and supports him. Does Beth have a legitimate reason to worry? When Randall tells William about the specialist appointment, he brushes it off. After giving William some money, he comes home high as a kite later than night. It’s a sad reality Randall needs to face.

Kevin returns to meet with the executives about his melt-down on live television, including his manager, Laney (Katey Sagal). He is told he is stuck to the show for another 2 years, and he cannot get any work outside of that, due to the contract; and he is going to have to go meet and beg for his job back. He goes to see Kate and she helps him cope with the situation and he tells her he needs her. He tells her she has to come to the party with him, that he can’t do it without her.

Kate attends a support meeting, when she snaps on everyone. She is anxious about going to the party with her brother, can’t find anything to wear and flipping out. Toby tells her that he is going to that party with her. He seems to be her “go to” person and biggest support person, next to her brother, Kevin. Toby brings her on the dancefloor at the party and all she sees is people laughing at her and Toby Kate starts to get upset and Toby takes her off the dancefloor and they decide to drink again. Meanwhile, Kevin meets with the network boss (Brad Garrett), who will not allow him to quit the show, and threatens to ruin him if he doesn’t keep the contract. When Kevin tries to talk to his sister, she is too drunk and busy dancing to help him; and Kevin walks away.

Kevin has a moment of clarity, and remembers when they were kids and he how he would always abandon Randall and let Randall be bullied; but he takes the chance and calls Randall. He even admits that he was a horrible brother, but Randall says he still has time to change that. Kevin tells Randall he has to go back and be the whore he is to get his job back.

Toby and Kate have a candid conversation about her weight. She admits it will always be an issue for her, even since she was little. Toby encourages her, makes her laugh and still wants to be with her. Kevin finds them, tells him he stood up for himself and he is going to pack up and move to New York. Kate is shocked.

Randall gives him advice and with Kate drunk beside him, they share that precious chant they shared as kids with their dad. The call ends with Randall telling Kevin that “Mom and Dad didn’t raise no whores!” They share a fond good night and hang up. While Randall is on the phone, his wife chats with William and tells him that Randall is the perfect man, and he is so kind-hearted, she needs to protect him. She asks him questions, she knows Randall will not ask.

Randall interrupts Beth just as she is telling William he is over-staying, but William says he doesn’t want to leave there. He admits he is dying but he is not on drugs, he travels 3 hours every day to feed his cat, the only thing he has left. After they hear the truth, Beth than says she feels like a bitch and they all laugh.

The episode ends with Randall’s parents at his front door, but when Randall arrives at the door, he says, “Hey Mom and Miguel!” What an ending!!! We will have to wait to find out how and why Rebecca ended up with Jack’s best friend, Miguel!