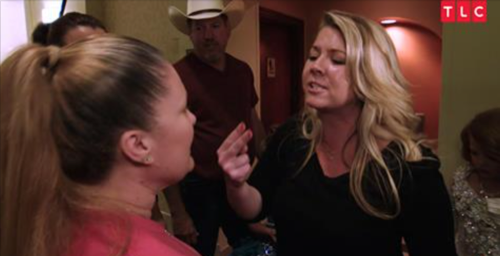 On last week’s episode, at the Me and My Pet Pageant, chaos ensued when Aly and Gia’s goat, Blackberry, allegedly pooped all over the floor – and neither Kelly nor her husband would clean it up. If You missed it we have a full and detailed recap, right here for you!

On tonight’s Toddlers & Tiaras episode as per the TLC synopsis, “Eden Wood is back where her career began: Universal Royalty in Austin, TX! This season, Eden will be judging the tough competition between Cambrie’s Court heavy hitter, Abby, Jaimie’s sassy girl, Kaydence, and returning UR champ, Princess Mehayle. ”

Cambrie brings the girls to the salon to get them ready for the pageant – Universal Royalty. Jaimie is also attending with her team after a break. Jaimie has heard that Cambire always wins, but she isn’t worried.

Cambrie introduces her new collagen concoction to the girls.

We meet Kaydence, she is 5. She loves to hunt and fish more than she likes doing pageants. She is on Jaimie’s team. She doesn’t like getting her make-up done. Jaimie comes over for lessons. Kaydence isn’t excited and she wants to play.

We meet Mahaley. She knows how to do a cowboy dip and she hopes to become a Dallas Cowboys cheerleader one day. Her coach Nikki teaches her a few dance moves.

Abby has more than 16 crowns and she is ready to win this weekend. She has been participating since she was 6 years old. She is part of Cambrie’s Court. Her mom loves perfection and she is willing to spend any amount of money. Cambrie arrives for their lesson. Cambrie helps her mother pack Abby’s attire for the pageant. She tells Abby that her dress isn’t ready.

All of the girls are arriving at the pageant. It’s makeup and hair time. Jaimie has brought Kaydence, her only contestant in the pageant.

Mahaley’s mother is really concerned about her hair. When it is interview time, Mahley gets angry until her mother tells her she can $10.

Abby’s mother is stressed that she is going to forget her routine.

Eden Wood, a pageant star, is a surprise judge. Mahaley is thrilled that she is there. Her mother too, who tries not to cry.

The first round is the beauty competition. Kaydence gets up on stage. She wants to win for her sassy sisters.

Abby’s mom is worried about her routine and her eye contact. Fingers crossed. She made her way on to the stage and did great and then froze. She uses some hand signals, something that is against the rules and makes Mahaley’s mom angry.

Mahaley gets on stage. She did great but the judges didn’t like her hair – comparing it to a pile of Krispy Kreme donuts. After the 1st round they try to fix her hair. Inside the bathroom, Mahaley’s mother falls to the ground. The paramedics are called.