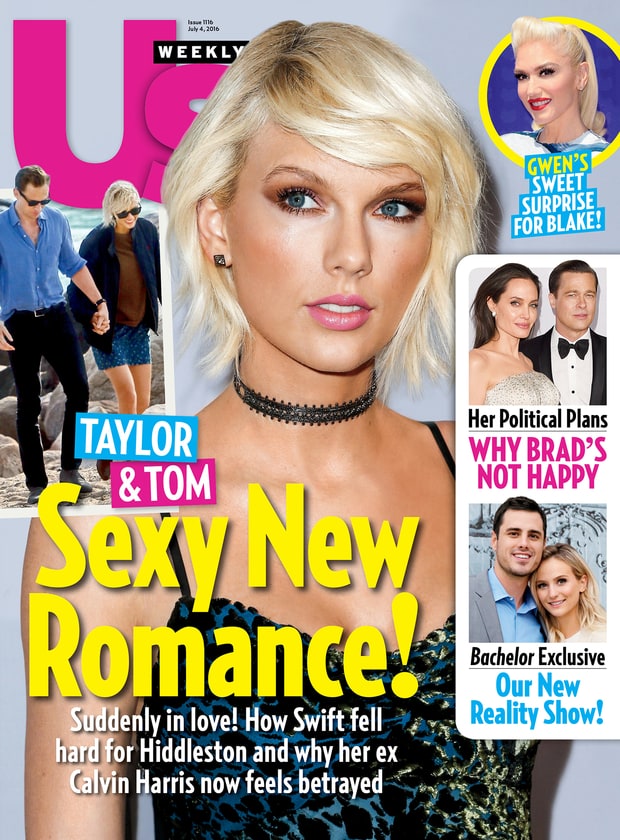 Once Taylor Swift and Calvin Harris split, Tom Hiddleston wasted no time inserting himself into Taylor’s love life. A source revealed this juicy bit of gossip to Us Weekly in their latest issue that hits newsstands this week.

Sources report that Calvin Harris is not happy about Taylor’s new love interest and feels betrayed. Prior tabloid reports say he’s totally supportive of his ex, but we wonder how true that is. Does Calvin Harris regret the end of his relationship with Taylor Swift?

Rumor has it that Calvin is furious but isn’t sure if Taylor was cheating with Tom Hiddleston before they broke up or if Tom pounced when he saw the chance to get with Taylor and the Shake It Off singer disrespected their relationship by moving on ASAP.

Taylor Swift and the hunky 35-year-old British actor Tom sat together at the Met Gala in New York City in early June. Tom Hiddleston told MTV UK in an interview, that he found Taylor Swift to be “very charming.”

If Tom Hiddleston’s past relationships are any indication, Taylor is dating a real romantic. Tom bypassed an audition to surprise his then-girlfriend for a date plus he wooed Taylor even before her split was announced from Calvin Harris by dancing with her at the Met.

During his early pursuit of Taylor Swift, Loki portrayer Tom sent the songstress flowers and an insider told Us Weekly, “He really courted her. He liked her and saw an opportunity when she was suddenly single and he went for it.”

We can’t blame the guy, but as with Taylor Swift’s past many relationships, we wonder how long her romance with Hiddleston will last. Yes, we’ve seen them making out near Taylor’s Rhode Island mansion and attending Selena Gomez’s concert in Nashville.

They are getting closer, but what we’ve seen so far doesn’t speak to how long this infatuation could last. Another Taylor Swift insider claims it has staying power saying, “He’s hot, smart, talented, British — everything she’s into.”

We’ll just have to wait and see. We’re also waiting for a Calvin Harris breakup song. Perhaps since T-Swift has already moved on, the UK deejay will be spared that humiliation. Despite Taylor’s recent breakup with DJ Calvin Harris, Taylor was totally open to a new relationship.

The source explained how quickly Taylor Swift is recovering from the heartache of her last breakup. The source told US, “There really isn’t a better way to get over a breakup!” It’s clear that Tom Hiddleston wasted no time making a move on the leggy songbird and Calvin Harris can’t be happy about it.

No matter how mad he may be, given Taylor Swift’s popularity, Calvin neetayds to watch out for backlash from a legion of Taylor fans. Bottom line, Calvin may just have to keep his anger inside so he doesn’t face the wrath of Taylor’s vengeful lyrics – and her fans.

Check back with CDL often for all the latest celebrity news and gossip.