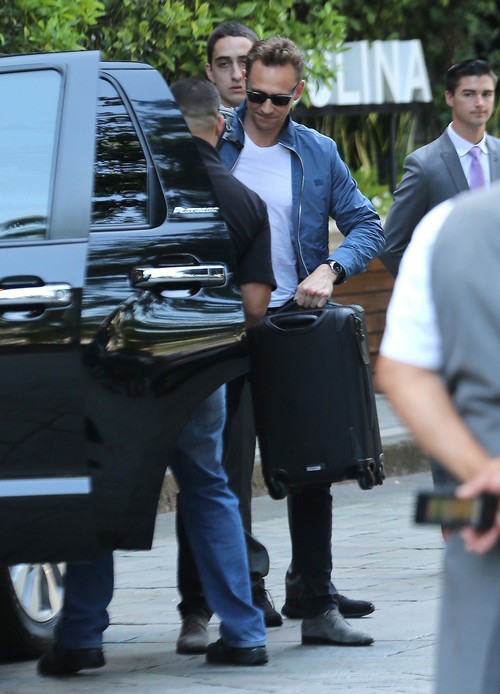 There’s no doubt that Taylor Swift and Tom Hiddleston’s relationship is definitely causing problems for the British actor and his career. And in fact, there’s even a new rumor that says Tom Hiddleston’s PR team is so worried about his Hollywood standing that they are doing everything in their power to push Taylor Swift away – hoping they break-up.

While Tom Hiddleston’s James Bond dreams are definitely not happening any more, thanks to his affiliation with the ‘Bad Blood’ singer, things are about to go from bad to worse for him, if he doesn’t cut Taylor Swift loose from his life.

According to reports, Tom Hiddleston wanted to bring his girlfriend Taylor Swift to Comic-con in San Diego, but his PR team banned her, fearing that she would attract too much attention from the media, who would no doubt talk more about the couple’s relationship than the actor’s upcoming projects.

It’s no wonder that Tom Hiddleston’s PR team is worried about the “Hiddleswift Circus” that he’s now become a part of. Everything that Taylor Swift does is clearly for attention, but Tom Hiddleston is not the kind of actor that needs to get attention from her fans or her Instagram account for that matter.

Plus, Taylor Swift’s popularity has taken a major blow this summer, all because of her nasty Calvin Harris break up and her Kanye West feud that spurred Kim Kardashian’s leaked tapes. Taylor Swift’s victim game is no longer working for her, as Kimye called her out for lying when proved that she did give Kanye West her blessing for including her name in the lyrics to his controversial song, ‘Famous.’

Even worse, nothing for Taylor Swift ends well. Her career has revolved around the drama she creates in her personal life and that’s something Tom Hiddleston shouldn’t definitely note. If his PR team is laying the law with a Taylor Swift ban, that it will only be a matter of time before these two call it quits.

And just like history has proven to us, Taylor Swift will leak stories to the media about how Tom Hiddleston did her wrong during their break up. Isn’t that the reason why her ex Calvin Harris is still so fuming bad over their break up?

Tell us CDL readers, do you think a Taylor Swift and Tom Hiddleston break up is in the works? Do you think his PR team is doing the right thing by banning the singer from his events? Drop us a line with your thoughts in our comments section below.