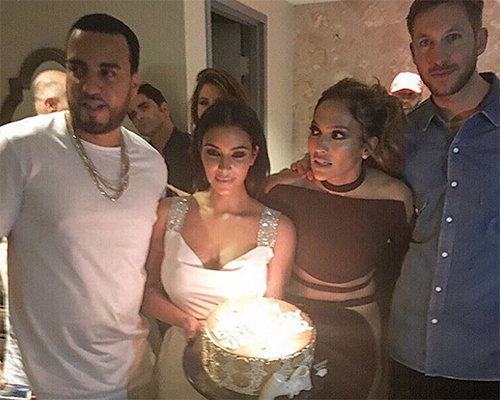 The Calvin Harris and Taylor Swift breakup has created so much negative press for the chart topper, that it’s only a matter of time before she finally retaliates with a revenge song of her own. Yet Calvin Harris might be beating Taylor Swift at her own game, as he’s definitely trolling her by posing for photos with Taylor Swift’s enemy, Kim Kardashian, while celebrating Jennifer Lopez’s birthday.

After Taylor Swift and Calvin Harris’ feud over the songwriting credit for his hit song, ‘This Is What You Came For,’ made headlines, Kim Kardashian took an aim at the ‘Bad Blood’ singer on her own. The reality television star leaked tapes of Taylor Swift and Kanye West’s phone conversation, in which the singer gave her blessing for the rapper to use her name in the lyrics of his song, ‘Famous.’ Taylor Swift has long denied the claim, but now that Kim Kardashian has shown her receipts, the singer’s bad week has turned out to be one of the worst months of her life.

To make matters worse, Calvin Harris is now partying with the likes of Kim Kardashian, French Montana, and Jennifer Lopez. Clearly, a photo of Calvin Harris and Kim Kardashian together is just another dagger in Taylor Swift’s heart, as he’s clearly showing her he’s got his own squad of famous Hollywood friends, too.

According to TMZ, Calvin Harris and Kim Kardashian even chatted for quite some time during Jennifer Lopez’s party. There’s no doubt that the two talked about their Taylor Swift feuds and the controversy surrounding the lyrics for ‘This Is What You Came For’ and ‘Famous.’

So far, Taylor Swift has not commented on the photo, but it will only be a matter of time before a Taylor Swift and Tom Hiddleston engagement rumor starts popping up in the headlines. After all, Taylor Swift is a PR mastermind who knows how to manipulate the media, especially whenever she’s in need of any attention. And knowing how Taylor Swift operates, now would definitely be the time, especially when she’s made so many enemies and caused so many feuds in the celebrity world.

Tell us CDL readers, what do you think? Is Calvin Harris Team Kardashian now? Is Taylor Swift upset that her ex is now hanging out with Kim Kardashian and Jennifer Lopez? Will Taylor Swift make the next move in this obviously very public feud of theirs? Let us know in the comments section below!