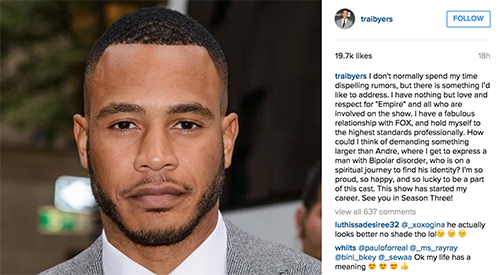 Is Trai Byers leaving Empire? Byers, who plays the part of Cookie and Luscious’ oldest son Andre, was like the majority of his fellow cast members: a young actor with little credits to his name looking for his big break, and he found it! But supposedly Trai’s Empire success has gone to his head, and this week New York Post ran an article indicating that Byers was threatening to quit the wildly popular primetime drama because he thought he was “above it” and wasn’t getting enough screen time.

According to Empire spoilers from the New York Post earlier this week, Trai Byers was threatening to quit the FOX primetime drama after throwing a total diva fit on set while filming Season 3. The Post’s inside source dished, “At first, being on ‘Empire’ was major for him. But he feels his character is not as important this season, and he hates not being the star. He thinks he has the acting chops of Taraji and Terrence. He doesn’t get how the show benefits him, and he feels he has way too much talent when he’s not the star by any means.”

But, have no fear, Andre fans, apparently Trai Byers came to his senses and realized he probably shouldn’t bite the hand that feeds him. The actor took to Instagram and tried to backtrack – debunking the Post story and insisting he had nothing but utmost respect and gratitude for ‘Empire’ and everything it had done for his career. The actor stated, “I’m so proud, so happy, and so lucky to be a part of this cast. This show has started my career. See you in Season Three!”

So Empire fans, do you think that Trai Byers is sticking around? Do you believe that he is really a total diva behind the scenes? Let us know what you think in the comments below!