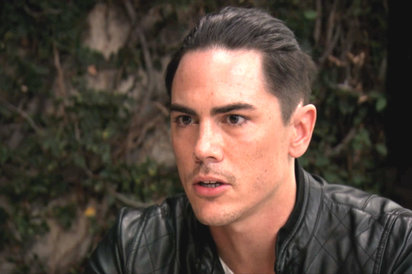 The city was celebrating Gay Pride and it was one of the biggest days of the year for both Sur and Pump. However, Lisa who was a big gay activist tended to go overboard. She apparently came up with the weirdest costume ideas for her staff and they were just no getting out of it. So they had to wear whatever she came up and this year she might have outdone herself. Lisa had wanted the guys to wear these bright pink hats and shirts though that didn’t compare with the girls had to wear. The girls had to wear this latex outfits that hugged their bodies and definitely showed off their figures so it was basically guaranteed to get them tips.

Though something happened when Lisa asked Lala to try on her outfit. Lala had said that she couldn’t because she wasn’t wearing underwear and that had set off Katie. Katie thought that Lala was tacky for announcing that to a room full of people and that advanced the idea that Lala was this big old slut. So it was almost as if Lala could do nothing right in her enemies’ eyes yet she didn’t really help herself by continuously changing the story about how she got her new car. Lala had originally said that her mother bought it for her as a gift and then she had seemingly won it in some giveaway. And after that it had been gift from her boyfriend.

So everyone wondered which story was the truth. Did Lala get her new car by near virginal means or did she get it from her very married lover? Yet, the thing about her boyfriend being married had also since changed because Scheana had heard that the wife dumped the husband after she looked through his phone and found sex tapes from Lala, but Tom had thought that he would get to the bottom of it. Tom and Ariana had agreed to go on a do lunch with Lala so he was hoping to finally g meet the elusive boyfriend that everyone was talking about. And on the day that he thought he would meet this guy, he was a no show and Lala was still refusing to mention the guy’s name.

Lala had said that they would meet her boyfriend at a later date and so she had invited them to see a basketball game with her and alluded that the boyfriend would be there. But she still didn’t want to say his name or even talk about the guy that was claiming to be her boyfriend on Instagram. So Tom was almost at the point where he was going to interrogate her at the table when the topic of Ariana’s book came up. Ariana was doing a cocktail book and she was publishing it with a friend however, no one had thought to ask Tom to help. Tom has been a bartender for almost a decade and he felt that he should be doing the book. Not Ariana!

Ariana though was going to take any of Tom’s crap. She said that it was her book and then demanded that Tom allow her to have her time in the limelight. However, Tom was getting weirder and weirder about that. He said that he supported her and that all he wanted to do was help then he failed to notice how much he wanted to take over. So Ariana had had enough of that and she had wanted Tom to give her space and merely support her decision rather than try to take them over. And so that was a problem in their relationship and it could have come back to bite them only something happened that changed everything.

The Orlando shooting had happened and everyone had been affected. They had all been sad to wake up and find out about what happened in a night club that should have been a safe place yet they had also been scared about returning to work and especially on Gay Pride. There had been threats all across the US and someone had been caught in Santa Monica. So unfortunately, there were some that did call out sick because they were afraid about what could happen to them if they went to work and so it had been up to Lisa to inspire them. Lisa had loved this particular holiday and she didn’t want a few threats to get away of celebrating love so she decided to go to the parade.

Lisa had gone to celebrate with everyone else and she hadn’t hesitated about climbing up on one of the floats. So that had given Tom the push he needed. Tom hadn’t wanted to stay back if Lisa was strong enough to do what she did so he had gone into work with Ariana and thankfully they hadn’t been the only ones. Jax and Brittany had also gone into work that day and they were all doing their best to keep their spirits up, but Tom had quickly realized that he needed to apologize to Ariana. He had told his girlfriend that he had been jealous about her success and so he had apologized for trying to rain on her parade.

But eventually others had come out to celebrate with their friends and the holiday had been as lively as ever. So later Lala had stopped by James to make some music with her friends and out of nowhere Lala had brought down the mood. Lala had mentioned that Ariana was throwing a birthday party and that there might be a problem with James being invited because Jax was going however, James had called out Lala for what she was trying to do. He said that she wanted to stir up trouble when really she should be focused on whatever was going on in her. And, well, that was tough subject for Lala.

Lala had told James that she and her boyfriend had broken up. She said that he had dumped her and that it was still a sore subject. So she didn’t want to talk about it much though James had been a little confused. James had apparently hears that Lala was seeing anyone, that she was seeing a married man, and that she was in some uncomplicated fling. However, he wisely chose not to bring up the many inconsistencies about Lala’s dating life that he heard and chose instead to focus on the music that he had been making with Lala recently. Which she said she appreciated because the breakup had been pretty tough.

So there was still a little mystery surrounding Lala’s apparently ex-boyfriend, but otherwise, Gay Pride had been a success.