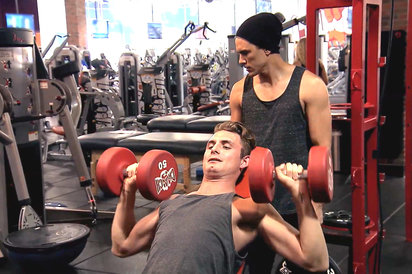 Schwartz had said that he was finally ready to get married however it wasn’t long before he began experiencing a little condition like cold feet. So eventually Schwartz tried to talk about those same feelings with Katie and naturally that didn’t go down well with the happy bride-to-be. Katie had said that she had waited six for this and apparently that meant Schwartz wasn’t allowed to ruin her moment. But he sort of did do that. Schwartz had gone with Katie to check out the wedding venue and he just didn’t when to shut up.

Schwartz would make these “jokes” that he thought was funny yet they weren’t really jokes and they made everyone around him feel uncomfortable. However, Schwartz simply refused to take the hint and kept on making off the cuff remarks about how he wasn’t ready to marry Katie. So he was an embarrassment.

He was saying things in front of strangers that one should never say and he was also ruining the moment when he tried talking about the budget. Schwartz had wanted to get married on a very small budget and so he ended up going a little too far.

Schwartz had thought he should put his hand over Katie’s mouth as she was telling the vendor what she wanted. So Katie had actually had to escape her fiancée and be the only adult in their relationship. Yet, Schwartz later tried to get Katie her dream and so he took a modeling job.

The job wasn’t exactly great and he would have turned it down if he didn’t need the money though Schwartz still saw the funnier side of the job when he was asked to stuff his underwear for this underwear campaign.

Schwartz had realized that he had been asked to stuff his underwear because they didn’t like his look on its own, but he hadn’t gotten angry and he had later laughed about it because he just didn’t know how to stuff his underwear properly. Though taking the modeling job didn’t exactly make everything ok with Katie.

Katie was still angry about all the other things that Schwartz does and she even accused him of having a penis that didn’t work. So Schwartz thought that was ludicrous meanwhile his relationship was falling apart as quick as Tom and Jax’s relationship.

Tom had found out that James was fired and that it was because he had created a scene. So right away Tom knew that James getting fired was Jax’s fault. Jax had riled up James by saying James cheated on his girlfriend Raquel and had practically stirred James into a frenzy.

But when Tom and Ariana mentioned that, Jax got upset with them. Jax truly believed that James was this horrible person that shouldn’t be around him and so he cheered when he heard that James got fired from both of Lisa’s restaurants.

Jax had said that James had been horrible to all of them, but Tom and Ariana weren’t the only ones that thought Jax could have provoked James. Schwartz had also said that Jax went out of his way to antagonize James and so he chose to go talk to the girls. Jax had told them that Tom and Ariana were trying to make him feel bad about James getting fired and the others couldn’t understand it. They were all happy that James got fired and so they then got upset with the others for defending James. However, no one got angrier than Kristen.

Kristen had asked Ariana if she knew how horrible James could truly be and she also mentioned that James nearly ruined her life with the way he treated her. Yet, Ariana thought that was a bit much seeing as Kristen hadn’t been an angel herself.

So Ariana had reminded Kristen about all the times when she punched someone out of the blue and that Kristen had at one time or another cheated all of her friends like trash however Kristen refused to back down and she still thought that James was the worse than she was. Even if she did admit she would punch James again.

So Scheana reached out to Ellie who was the one claiming she had a picture of James and herself together and she found out the picture was real. Ellie had taken a picture and she did so because James had claimed he was going lie about it.

James had told Ellie that if she told anyone about their night together that he would lie about it and so the photo was something he couldn’t run from. But James managed to surprise everyone when he still claimed he never cheated on Raquel.

James had told Lala that the photo was a fake because he hadn’t slept with anyone else in 2016 and he last hooked up with Ellie in 2015. So Lala was trying to tell him that he didn’t need to lie to her when James turned the tables. James said that Lala didn’t need to lie either about whether or not her boyfriend was married.