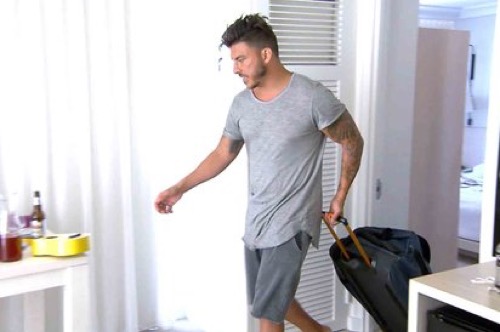 Tonight on Bravo Vanderpump Rules returns with an all new Monday January 25, season 4 episode 13 called, “The Bitch Is Back” and we have your weekly recap below. On tonight’s episode, while the SUR crew parties in Hawaii, Stassi visits Kristen Doute in LA and finally reveals the truth about her sex tape. Ariana Madix rejects Scheana Shay’s fake apologies, and Tom strikes back with an attack on Scheana’s marriage.

On the last episode, the SUR gang traveled to Hawaii to celebrate Jax and Tom’s birthdays, bringing their conflicts with them. Lala tried to come clean about her flirtation with Jax, but Jax refused to accept any blame. Tom discovered Scheana sent negative texts about him to Ariana’s mom. Katie lashed out when Lala skinny dipped in front of Schwartz, and Lisa Vanderpump fretted over Max from 3,000 miles away. Did you watch the last episode? If you missed it, we have a full and detailed recap right here for you.

On tonight’s show as per the Bravo synopsis, “while the SUR crew parties in Hawaii, Stassi visits Kristen in LA and finally reveals the truth about her sex tape. Ariana rejects Scheana’s fake apologies, and Tom strikes back with an attack on Scheana’s marriage. Lala kicks James out of bed for an equipment malfunction, Scheana worries about Shay’s drinking, and just hours before leaving paradise, Jax winds up in jail.”

Tonight’s episode is going to be another drama packed one, which you won’t want to miss. So be sure to tune in for our live coverage of Bravos’ Vanderpump Rules season 4 episode 13 — tonight at 9PM EST! While you wait for our recap, hit the comments and let us know how excited you are about this new episode of VR tonight and what you think of the current season so far.

Lala had run away from the dinner table on last week’s episode but it looks like her argument with Jax and Brittany had affected her more than the others thought.

Lala was usually the girl that comes across as tough and that she could pretty much handle anything that anyone throws at her. But she honestly been hurt by Jax. She had thought the two of them were friends and she had even been willing to forgive him for lying about his relationship with Brittany.

Yet after their argument, she hadn’t felt like she was ready to rejoin the rest of the group. So she had instead had gone back to the hotel where her true friends eventually found her lying in bed. Still in tears!

James, Max, and Faith were the only ones to notice that Lala was missing and therefore they had been the only ones to go after her. Only once they had seen the state she was, they had then tried to cheer her up and tell her that Jax was the wrong in the wrong. But nothing they said seemed to work on her and James could only sensitivity for so long. Particularly after he had a few drinks.

James just had this ability to make things worse and that’s what he ended up doing when he climbed into bed with Lala. She had needed a friend and he had tried to get some. So, really, she had to kick him out. Because not only did his behavior afterwards showed another side to him but it finally answered the question she had been asking herself since he first tried to sleep with her.

James and Lala had almost slept together back in LA however it didn’t pan out. James had been too drunk at the time and he had later use that as an excuse for why he was unable to “rise” to the occasion. Though Lala hadn’t bought the part where it was somehow either the whiskey or her fault for his inability.

And after he tried to sleep with her again, Lala watched as Max had to convince James to leave the room before he could insult Lala with more than just “tease”. Or “that’s what you get for running around with Jax”.

So Lala had made a decision about her relationship with James by the next morning. She had told him that they were better off as friends. And responded by dismissing her once he realized she wasn’t going to change her mind.

And thus there goes their friendship or whatever chance it might have had. Although, speaking of friendships, Scheana and Tom’s relationship seems to have been permanently altered by Scheana’s text conversation with Ariana’s mother. Tom had seen what she did as a betrayal and so she had apologized to him without actually meaning it.

In fact, she told her husband that she was merely apologizing just so Tom could move on already. And Tom was only pretending to forgive her because he too claimed he wanted to move on.

But Tom had a few things to say to Ariana about Scheana. He had told his girlfriend that the only reason Scheana said all those things about him was because she knew her own relationship was in trouble and was most likely lashing out. And when he later mentioned Scheana’s problems with her husband to Scheana – she had gotten offended and had accused Tom in her confessional of interfering in her marriage.

So basically those two were angry at each other for doing what they just did to the other. And yet Scheana thought she was in the best position to hand out advice to Lala of all people.

She had apparently told Lala that she was once considered to be a slut and that she had changed her life around. And who knows maybe Scheana thought she was helping but instead she had informed Lala in her own way what the others think about her. And occasionally say about her when she’s not there.

Yet Lala forgave them. She had hung out with the rest of them again and she had made peace with Brittany after Brittany asked to start over but in her confessional Lala had gone on to call Brittany oblivious. She said that anyone could tell that Jax was a liar and the fact Brittany was refusing to see it made her gullible.

Meanwhile Jax was telling his friends in Hawaii that he thinks Brittany is special. He said he never meant anyone like her and that he’s actually enjoying being in a relationship. And it turns out that one of things that make Brittany so special is that she has no problem with putting up with his shenanigans. Like he got arrested on the day they were leaving Hawaii.

Jax it seems had committed some felony that required his friends to post an eleven-thousand-dollar bond. And Schwartz had been smart enough to find a bondsman that could help. So Jax made to the flight back home by sheer luck.

But awaiting the group was Stassi. Stassi and Kristen had made amends when the others weren’t looking and so Scheana, Jax, and Katie had been worried about what that new friendship might lead to on their flight home.

And one thing is for sure. While they have been talking about forgiving and forgetting with Kristen, no one was ready or even wanted Stassi back in their lives.