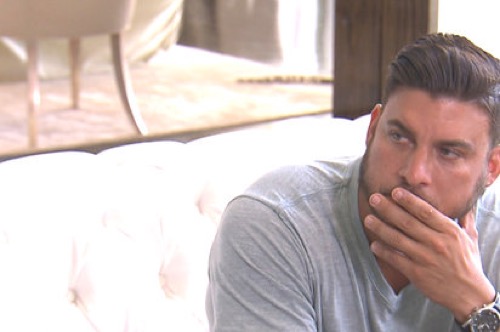 Tonight on Bravo Vanderpump Rules returns with an all new Monday February 1, season 4 episode 14 called, “Sex, Lies and Stassi’s Videotape” and we have your weekly recap below. On tonight’s episode, accused of felony shoplifting, Jax Taylor must answer to the courts, his girlfriend, and – worst of all – Lisa Vanderpump. Stassi finally tells the whole story of her sex tape crisis, and returns to SUR to repay Lisa for helping her keep the tape from leaking.

On the last episode, while the SUR crew partied in Hawaii, Stassi visited Kristen in LA and finally revealed the truth about her sex tape. Ariana rejected Scheana’s fake apologies, and Tom striked back with an attack on Scheana’s marriage.

Lala kicked James out of bed for an equipment malfunction, Scheana worried about Shay’s drinking, and just hours before leaving paradise, Jax winded up in jail. Did you watch the last episode? If you missed it, we have a full and detailed recap right here for you.

On tonight’s show as per the Bravo synopsis, “accused of felony shoplifting, Jax must answer to the courts, his girlfriend, and – worst of all – Lisa Vanderpump. Stassi finally tells the whole story of her sex tape crisis, and returns to SUR to repay Lisa for helping her keep the tape from leaking.

James and Lala can’t keep their hands off each other at a racy photoshoot, Scheana and Shay toast the end of a rocky first year of marriage, and Kristen deals with a “Stage 5 Clinger” boyfriend.”

Tonight’s episode is going to be another drama packed one, which you won’t want to miss. So be sure to tune in for our live coverage of Bravos’ Vanderpump Rules season 4 episode 14 — tonight at 9PM EST! While you wait for our recap, hit the comments and let us know how excited you are about this new episode of VR tonight and what you think of the current season so far.

Prison apparently has a way of changing people on tonight’s episode of “Vanderpump Rules”. Where before Jax would have found some way to blame his situation on someone else, he’s now surprisingly taking ownership for what he did. And on top of that he seems really apologetic.

Jax or better yet his friends were forced into coming up with bail at the last minute. And they also had to take charge of his stuff. So all of his clothes and even his tooth brush was with his friends until it could later be returned to him – after they had all gotten back home.

And so Jax had been upset about that when he had finally gotten back home. He had needed his stuff and, because of his actions, he had to go without. But, more than anything else, Jax had been upset with the way he disappointed Brittany.

Like he apologized to her over and over. Which is not like him at all because he’s a man that generally put his girlfriends’ feelings low on his list of priories. So Jax has most certainly changed because of his experience and it looks like all he needed was the embarrassment of stealing a $350 pair of sunglasses in order to become a better boyfriend.

Though, everyone as in literally everyone had been talking about Jax the second he got back. They couldn’t believe that he stole something on his own birthday getaway and yet they couldn’t stop laughing at the whole thing. “Like, seriously, who steals a pair of sunglasses?” they asked and the answer turned out to be Jax.

Some said he must be a klepto and others just said he’s sad. However, Lisa was forced into making a judgement call because she couldn’t have Jax working at SUR. With his arrest so fresh in everyone’s mind.

The waiting staff had already made jokes about hiding the cutlery and Lisa was personally worried about allowing Jax near to any cash register. So ultimately she suspended him for two weeks to see how things go. And Jax decided to take his suspension as if it was a vacation.

He went out drinking with Brittany and Kristen. And soon the conversation turned to his friend Kevin’s relationship with Kristen because both Jax and Brittany were pretty sure that Kevin had a girlfriend. Yet Kristen claims to have knowledge of this girlfriend because if she had then she swears she wouldn’t have allowed Kevin to “move in” with her much less kiss her.

Although, Jax doesn’t believe that Kristen didn’t know. He and Brittany can both recall a conversation that had in front of Kristen in which Kevin said he has a girlfriend but Kristen doesn’t a remember a thing. She said Kevin told her he was single and to be fair he had reiterated that in front of Stassi.

Stassi had asked him if he had a girlfriend back home when all three of them had gone out for dinner and he had told her no. And seeing as Stassi has been crashing at Kristen’s, there had been plenty of times when he could have taken Stassi aside and told her the truth without Kristen overhearing. Yet that hadn’t happened.

So while Jax may believe that Kristen was lying about knowing in order to look good in front of Stassi, there’s also the possibility that she honestly hadn’t heard Kevin say he had a girlfriend.

But, regardless of what happened with Kevin, Stassi knows what kind of person Kristen is and it seems she made peace with it. The two have become friends again and Stassi has been staying with Kristen while she looking for another place to live. So you could say that Kristen had been first on her apology tour.

Stassi really wants to reconnect with the group and so she’s been trying to make amends to the people she’s hurt. And after she work things out with Kristen, she figured Lisa was next on the list. Lisa had actually done a lot of her but it doesn’t look like Stassi had ever appreciated what the other woman did.

Lisa had given her job when she needed one and she had tried to get rid of the sex tape in her own way. Yet it didn’t seem that Stassi saw how much Lisa had done for her until Lisa threw it all back in her face when the two finally met up at SUR.

So if Stassi wants to make peace again then she has to stop painting herself as the one that is always in the right.