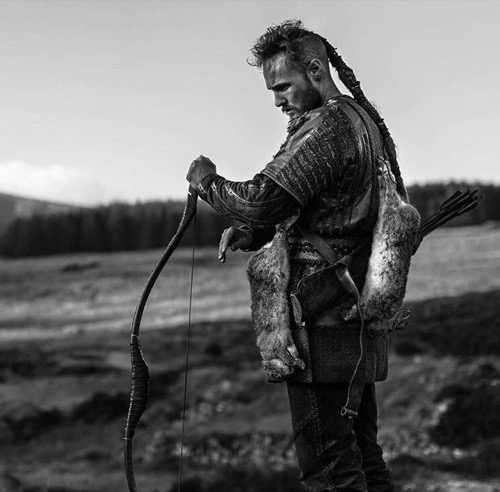 Tonight on the History Channel Vikings returns with an all new Wednesday, November 30 season 4 Fall Premiere called “The Outsider” and we have your weekly Viking recap below. On tonight’s Viking season 4 episode 11 episode as per the History synopsis, “Ragnar [Travis Fimmel] returns to Kattegat and formulates a plan to head back to Wessex, where he intends to right past wrongs.”

Vikings returns tonight with Ragnar Lothbrok (Travis Fimmel) having flashbacks where he is challenging each of his sons to kill him and be the next king. Instead of his sons killing him, Bjorn (Alexander Ludwig) asks his father why he returned. Bjorn informs him that he has another son named Magnus, the son of Queen Kwenthrith (Amy Bailey) from King Edward’s villa in Wessex.

Ragnar tells Bjorn he came back because he wanted to see what had become of his sons. Ragnar wants them to join him, but Bjorn says they are all rejecting him because of a piece of a map from the Roman Empire, that Bjorn found in Paris. It has a map of the Mediterranean Sea, and that is where he wants to go.

Ragnar asks how far along they are with their plans. He tells him that Floki (Gustaf Skarsgard) is building the boat, King Harold (Peter Franzen), his brother, and Hviserk (Stephen Rockett) have agreed to go along with him. Ragnar asks why Bjorn’s other two brothers are not going, and they tell him things have changed in Kattegat since he was away. They want to stay behind to protect their mother. Ragnar tells them they were right to think of family. They all walk away leaving Ragnar behind.

At dinner, Ivar asks why his brothers do not want to follow their father to England? Ubbe (Luke Shanahan) says that he knows who he is and to shut up. Ivar than asks Sigurd taunting him that he might get seasick. Ivar asks him if he is afraid of him.

A slave girl comes to fill Ivar’s cup and he gropes her, Ubbe tells him that is not the way to treat her; Ivar insists she is just a slave and they all want her. Ivar’s mother, Queen Aslaug (Alyssa Sutherland) tells him to stop.

In the fields you see Lagertha (Katheryn Winnick) training a shield maiden on how to protect herself. She tells her she wants her to be ready, but admits that she is not ready for what they have to do. As she pets her face lovingly.

Bjorn goes to see The Seer (John Kavanagh) to talk about his father, Ragnar. Bjorn feels that he shouldn’t have come back, but The Seer tells him Ragnar had no choice but to come back. Bjorn asks what that means? The Seer asks him if he really wants to know. Bjorn says he is not afraid.

The Seer tells him that his father brings calamity, disorder, chaos, tragedy and death; for all thy glories, the god swill be fierce with despair. Bjorn asks if he will die and the Seer tells him to go away. Bjorn asks the Seer one last question… What calamity will befall on us? The Seer says not one calamity, but too many calamities to number. The last words the Seer shares with Bjorn is that he was happy the day his father returned, but he should in fact curse that day.

Bjorn goes through the great hall and joins his wife in their room. She asks how his father took the news, and he tells her that he was disappointed in his plans because avenging what happened in England should be the most important thing in his and everyone’s life right now. Bjorn says everything was always for Ragnar, and those days are gone!

Ragnar sneaks up on Helga (Maude Hirst) by the shores and tells her she looks like she has seen a ghost. He grabs her hand and asks where Floki is? Meanwhile, Ivar sneaks up to the barn to watch Ubbe and the slave girl having sex, when they are done Ubbe asks her name and she says its Margaret.

Ragnar is admiring Floki’s work on the boat. Floki says he has learned through the years about what works and doesn’t work. Ragnar confronts him about giving his ideal boat to Bjorn, but says it is fitting but in an annoying way.

Ivar continues to crawl through the woods to see Margaret having sex with his brother Sigurd. Ragnar asks Floki if he is going with Bjorn, and he tells him that he wasn’t there, and he made him a promise. Ragnar tells him that he knows he must go back to England, Floki tells him, he should have done that a long time ago. Floki tells Ragnar that he knew the truth like him about what happened to the settlement, but he chose to say quiet. When Ragnar asks why, Helga says its because Floki loves him.

Ragnar’s four sons go through the forest to practice their archery, and sword skills. Ivar grabs an arrow and shoots it right between the brothers fighting with the swords. They start a battle with Ivar who is as strong and swift as they are. Jealousy is everywhere.

Ragnar wakes up at Floki and Helga’s place, where he asks Helga why she didn’t wake him. She said there was no reason to. Ragnar asks if he missed breakfast, she says yes, and he replies that is reason enough to wake him. Floki hammers down on one of his fingers, and Ragnar and Helga smirk together.

Margaret meets with one more of the brothers, and has sex with him too while Ivar watches. A little while later, he watches his three brothers fishing, and when they are done and laying on the beach they all talk about Margaret; Ivar says he wants to also have sex with her. Two brothers say they will bring her to his bed, Ubbe says that she is a servant, not cattle; that she is a human being.

Ubbe says they need to ask her. Ivar wants to know what they would ask her? Ubbe says he will ask her, and that Ivar is not a cripple, he is the son of Ragnar Lothbrok, just like the rest of them.

Ragnar tells Floki that he has a feeling if Floki doesn’t come with him, that he will never see him again. Floki tells him not to be so sure of that. Floki says the fates they have will surely reunite them in Vahalla, and sit among the gods, drink and share their stories with them.

Ragnar says he doesn’t know if he will see Vahalla. Floki tells him if anyone deserves to go to Vahalla, it would be him. Ragnar asks Floki to watch over his family and to take care of Helga, even though he doesn’t deserve her. As he walks away he tells Floki he loves him, Floki begins to cry and shouts that he loves Ragnar Lothbrok too. Ragnar gets on a horse and leaves to the countryside.

Ubbe puts Ivar on a raft and the brothers bring him across the river to a building where Margaret is. They light some candles and help him onto the bed. She tells him to not be afraid, and she kisses him. She undresses him and herself, and they begin to kiss.

Ragnar meets with Astrid, who says that she believes her wet nurse is a little bit in love with him, he asks when he can meet her. He says he never heard about her and he is old enough to be her father. She says that is a very ridiculous thing to say, and Lagertha interrupts them, he is thrilled to see her. She says it has been a very long time. When she asks for a drink, Ragnar jumps to get it for her, instead of her slave.

Lagertha asks him why he left Kattegat, and he said he was no longer interested in it. Lagertha asks her slave to leave, and she asks him again why he is there. Meanwhile, Ivar is having sex with Margaret, and she cries while they are having sex, so he ties a rope around her neck, strangling her telling her he needs to kill her so she cannot tell his brothers of his inability to please a woman.

Ragnar says he is tired and it has been a long journey in the mind and begs her to forgive him for all of his faults and his failings. They both tell each other, no regrets, Ragnar kisses her on the cheek, as he is about to walk away, Lagertha grabs his face and says, “Yet, every regret.” She kisses him and he leaves to sleep and go back to Kattegat in the morning.

Lagertha and Astrid are in bed together, where Astrid tells her that she loves Ragnar. Lagertha asks her if she loves him more than her; she says of course not. They kiss passionately.

Ragnar’s sons get together to discuss the return of their father. Ubbe asks who is going with their father. Not one of them is willing to travel with him back to England because no one believes in him, even the gods. Ivar pipes up and tells them they are all unworthy of being Ragnar’s sons.

Astrid asks Lagertha if she is sure she didn’t want to leave with Ragnar. She admits she was never sure of how she truly felt about him, and what she should and shouldn’t do when it comes to him, and she is sure she isn’t the only woman who isn’t sure. As Ragnar travels back he stops under a tree, he wraps a rope around the tree branch, and hangs himself, but several dozen crows appear and break the rope so he doesn’t die.

Ivar crawls to his father’s chair and sits in it as a king, he invites his father to sit beside him. Ivar told him that his mother never let anyone sit on his throne since he left, because she hoped that one day he would return. He asks why Ragnar doesn’t speak to his mother? Ivar admits that growing up when everyone would fall asleep, he would creep out and sit on his father’s throne, and just think.

Ragnar asks him about what? He says about how Ragnar abandoned him, and how he wished his legs would heal so he could go out and find him. He says he wanted to find him to tell him how much he hated him. Ragnar says he will perhaps explain his actions, once they get to England. Ivar asks what use is a cripple on such a journey? Ragnar tells him to stop talking like that. Ivar agrees to go with him.