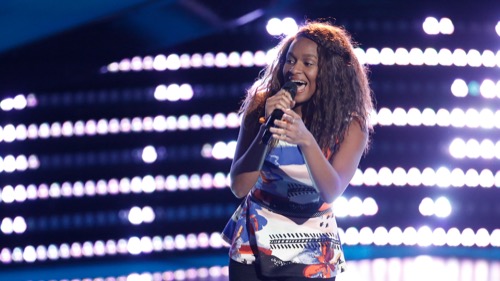 Shalyah Fearing of Team Adam chose to perform live “Up to the Mountain” by Patti Griffin this week for her Top 12 song performances.  Did you watch tonight’s show? In case you missed tonight’s show, CDL has you covered – read our full and detailed recap right here! And if you missed any of the videos – check those out right here.

On tonight’s Top 12 episode, Shalyah sang “Up to the Mountain” from Patti Griffin as her live performance and this is the judges’ comments about her performance:

Christina says how gorgeous do you look and then says what she loves about her is that she’s fearless and she goes to the edge of the cliff and jumps off. She says she feels her heart when she sings and that’s the most important quality.

Pharrell says he’s happy to have shared in her journey and agrees with Christina and knew when she was going to press the gas and says it seemed natural and on the spot and has a good barometer for when to lift things up.

Adam says they say this a lot, but it’s hard for him to wrap his mind around her just turning 16 and says Christina was the one who pushed her button and say she was late and is so happy to have her now. He says she’s becoming a woman in front of all of them. He says it blows his mind.

Check out the full video below – and share your comments on Shalyah Fearing’s Top 12 performance. Do you think Shalyah can win it all? If you missed any of the Top 12 performances – you can see them all right HERE!  Share your thoughts in the comments below on tonight’s finale performances for The Voice Season 10 Top 12.