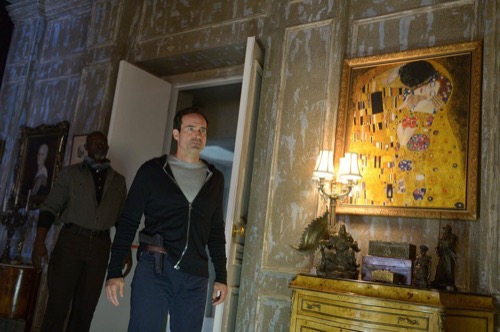 Tonight on FOX, Wayward Pines airs with an all new Wednesday, July 20 season 2 episode 9 called “Walcott Prep,” and we have your weekly Wayward Pines recap below. On tonight’s episode, with the Abbies closing in, Jason (Tom Stevens) makes a fatal judgment call; Pilcher (Toby Jones) recalls finding his Chosen One

On the last episode, Theo and Hassler teamed up to track down the escaped Abbie leader; Xander pressed Rebecca about her condition, and Jason discovered something devastating about Kerry. Did you watch the last episode? If you missed it, we have a full and detailed Wayward Pines recap right here for you.

On tonight’s episode per the FOX synopsis, “with the Abbies closing in, Jason makes a fatal judgment call; Pilcher recalls finding his Chosen One; Theo and Xander put their differences aside to save the human race.”

Tune in at 9PM on FOX for another exciting episode of WAYWARD PINE. We’ll have our live Wayward Pines recap down below so check back in with us. In the meantime, hit up the comments and tell us your thoughts on the second season of the show!

Tonight’s episode of Wayward Pines kicks off with Jason and Kerry. Kerry’s watching the Abbies in the woods on a camera monitor. She tells him that it looks like the leader Margaret is dying. Jason says that it doesn’t matter, they will just choose a new leader to lead them into town and attack.

Jason summons Theo and CJ to his room. He says that they have two options – they can wait for their imminent death or they can “fight it.” Jason wants to gather all of the townspeople and go back to sleep in the pods. He thinks that if they sleep for a few more thousand years, when they return, the Abbies will be gone.

Flashback to Pilcher, pre Wayward Times – he is gathering people to put in the pods to save humanity. He meets a pregnant teen named Abigail and they discuss the book that she is reading, ‘Animal Planet.’ Before Pilcher leaves, Abigail announces that she is going to name her baby Jason.

In wayward Pines, Jason holds a town meeting and speaks in to a loudspeaker. He says that he is going to be honest – the Abbies are moving in, and their numbers are strong, an invasion is imminent. They are going to begin immediate evacuation. Jason announces that they are going to go back to sleep until the Abbie threat is contained. CJ has Jason’s back – he tells the people that it is safe, and it is their only option.

CJ heads to the school to reassure the children that were born and had not been in the pods yet that they will be fine. He tells them all about the process and how their bodies are basically being “turned off.” He promises them that they will all wake up again. Afterwards, CJ heads to the mountain to start getting the pods ready.

CJ calls Jason and tells him there is a problem, only half of the pods are working. They will have to leave half of the town behind to fend for themselves with the Abbies. Jason moves forward with his plan – he tells Theo to come of up with a list of the healthiest people in town based on their medical records and those are the people they will take in the pods to return to Wayward Pines. Theo is furious, he tells Jason that is not fair, they have to do a random lottery. Theo reminds Jason that technically Kerry is “defective” because she can’t have children, so he will have to leave her behind “for the greater good.”

Kerry heads down to the lab, Theo tells her all about the pods. He lies and tells her that Jason is planning on leaving her behind because she can’t reproduce and won’t do the city any good. Theo antagonizes Kerry and tells her that she needs to kill or be killed – it’s time for her to take Jason out.

Flashback to Pilcher pre Wayward Pines – Pilcher is upset because Abigail and her family have decided not to leave in the pods with him. He tells CJ that they need a pregnant woman, that was part of the plan, they can’t go on without a baby. He heads to the hospital at night and makes a generous donation. He heads in to a hospital room and a young girl wakes up in her bed and looks at him … it’s Kerry.

Pilcher sits down with Kerry to talk to her about adopting the baby that she just gave birth to. He learns that she was molested by her father and her brother – they get to talking and Pilcher is amazed by how strong she is, and that she has read so many books. She says she wants to use the money from the adoption to travel and leave home.

Back in Wayward Pines, Jason is going through Pilcher’s files, he finds Kerry’s file and realizes that she gave birth to a baby named Jason before they went in to the pods. He has been sleeping with his mother…

Kerry arrives and Jason is freaked out. He tells Kerry that he can only talk half of the people, they need to get the ones that are selected up to the mountains as quickly as possible. Jason asks Kerry if he can trust her and if she keeps any secrets from her. He tells her that he knows that she had a baby. Kerry starts crying and says that Pilcher sent the baby to Texas before they got in the pods. Jason gets emotional and grabs Kerry and she hits him over the head with a statue. They begin fighting and wrestling – and Jason’s gun goes off.

Flashback – Jason went through files of all of the women in the pods after he took over, and he chose Kerry as his new partner. He sent the guards to go wake her up and brought her to his office. Kerry wakes up dazed and confused, he tries to tell her that there was an accident in Chicago and then he starts stuttering. Kerry is on the verge of freaking out. He promises to explain everything to her and says that they have all of the time in the world, and tells her that she will always be safe with him.

Kerry is lying on the floor next to Jason – he appears to be the one that was shot in their struggle.

Tonight’s episode ends with the people of Wayward Pines lining up at the mountain to go in to the pods, they don’t know that they are not all going to fit. Outside of the city, the Abbies are preparing to attack.