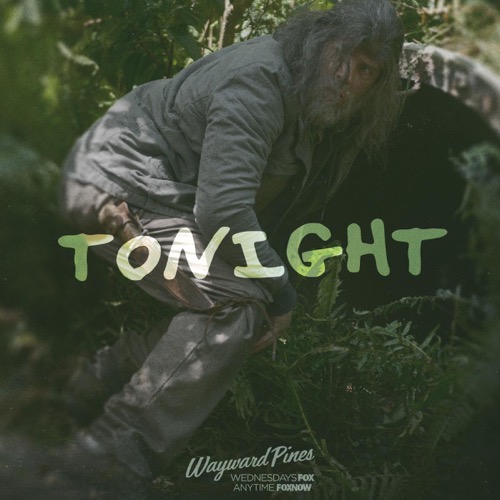 Tonight on FOX, Wayward Pines airs with an all new Wednesday, July 13 season 2 episode 8 called “Pass Judgment” and we have your weekly Wayward Pines recap below. On tonight’s episode, Theo (Jason Patric) and Hassler (Tim Griffin) team up to track down the escaped Abbie leader; Xander (Josh Helman) presses Rebecca (Nimrat Kaur) about her condition.

On the last episode, Theo and Megan took opposite views of the Abbies’ intelligence as Theo tried to communicate with their leader. And later, an underestimation proved extremely costly. Elsewhere, a reflective CJ pondered the great responsibilities he had over the centuries. Did you watch the last episode? If you missed it, we have a full and detailed Wayward Pines recap right here for you.

On tonight’s episode per the FOX synopsis, “Theo and Hassler team up to track down the escaped Abbie leader; Xander presses Rebecca about her condition; and Jason discovers something devastating about Kerry.”

Tune in at 9PM on FOX for another exciting episode of WAYWARD PINE We’ll have our live Wayward Pines recap down below so check back in with us. In the meantime, hit up the comments and tell us your thoughts on the second season of the show!

Tonight’s episode of Wayward Pines kicks off with Theo and Kerry in the elevator. Theo is still furious that Jason shot the Abbies in the lab and ruined the trust he was building with the female leader. Theo tells Kerry that he got the results back from her test and she won’t be able to have children. Kerry is devastated, Theo thinks that she is scared Jason will get rid of her since she can’t reproduce.

Theo heads to the lab and finds Megan in her wheelchair surrounded by a pool of blood the female Abby is gone, she escaped. He sets off the security alarm and Jason and his men march down to the lab. Theo tells Jason that the Abbies are going to come for them for revenge since Jason murdered them. Jason ignores Theo and tells his men to start searching for the runaway Abby before she gets back to her people and tells them to attack.

Theo and Jason argue, Theo insists that he tells the town that they are in danger. If they don’t catch the leader and she makes it out of Wayward Pines and back to the other Abbies, then they are in serious danger. The whole town goes under lockdown. Alarms start going off and all of the people rush off the streets and in to the nearest houses and stores.

A soldier kisses his wife goodbye and suits up an runs outside to report for duty and help search for the Abby. He finds her quicker than he expected, she is standing outside in the street. The Abby attacks him and carries his bloody body away. The soldiers rush to the scene of the crime but they are too late. Meanwhile, Frank and Lucy ran away from school and Rebecca finds them in the street and rushes them inside.

The Abby is in the center of town – hopping the roofs of the stores. The soldiers open fire on her, while everyone hides in the buildings, but the Abby managed to dodge all of the bullets and escape…again.

Theo and Adam head to the woods and start their own search party. Theo wants to find the Abby before Jason’s men do and kill her. They find the soldier’s dead body in the woods and realize that they have been following the wrong trail this whole time, they thought that the Abby was wounded.
Rebecca and Xander rally some troops of citizens to help search for the Abby. Zander has guns that he had hidden and Rebecca knows the layout of the entire town. She sneaks in to Jason’s office and steals the layouts of the Abby town that they built over.

The soldiers wind up in a shoot out with some of the townspeople, and the Abby gets away … again. Theo hears the gun shots and rushes to the center of town. One of the townspeople is dead, and a soldier named Mario is injured. Theo convinces them to put down their weapons and help him get Mario to the hospital. The Abby leader heads to the hole in the fence

Jason takes Kerry aside and shows her what appears to be a bomb shelter with pods in it. He even has a pod for the baby that he thinks they are going to have. He says that if the Abbies breach the fence then they can hide out there and start over, like Adam and Eve. Kerry breaks down and cries and confesses that she can’t have children and they won’t be able to have children. Jason thanks Kerry for telling him, and says that he loves her. Rebecca I walking down the street and comes face to face with the Abby. Just as the Abby is about to attack her, Xander comes out of nowhere and shoots the Abby in the arm. She make a run for it – and Rebecca thanks him for saving her, then they rush to find Jason. Rebecca and Xander show Jason and Kerry the map and tell him that they know where the

Rebecca I walking down the street and comes face to face with the Abby. Just as the Abby is about to attack her, Xander comes out of nowhere and shoots the Abby in the arm. She make a run for it – and Rebecca thanks him for saving her, then they rush to find Jason. Rebecca and Xander show Jason and Kerry the map and tell him that they know where the Abbys are going to enter the city. Apparently there is a tunnel under the fence. The Abby leader heads to the tunnel, Adam finds her trying to escape and he doesn’t shoot her – he just lets her go. Then, Adam puts down his gun and climbs through the tunnel after her.

The Abby leader heads to the tunnel, Adam finds her trying to escape and he doesn’t shoot her – he just lets her go. Then, Adam puts down his gun and climbs through the tunnel after her.

Jason, Kerry, Rebecca, and the soldier arrive at the tunnel – they hear hundreds of Abby’s growling, they are heading through the tunnel and breaching the city. Jason screams at his men to throw grenades down the tunnel to collapse it before the Abby’s get inside Wayward Pines.

Adam emerges at the other side of the tunnel the Abbys are waiting to attack him. However, their leader calls them off. Adam makes his way through the mob of growling Abby’s and wanders off in to the forest.

Theo corners Xander and reprimands him for passing out guns – he screams at Theo that one man is dead and another man is in the hospital and it is all his fault. Rebecca steps in between Theo and tells him to let it go, sometimes accidents happen.

Tonight’s episode of Wayward Pines ends with the Abby’s trying to nurse their wounded leader back to health.