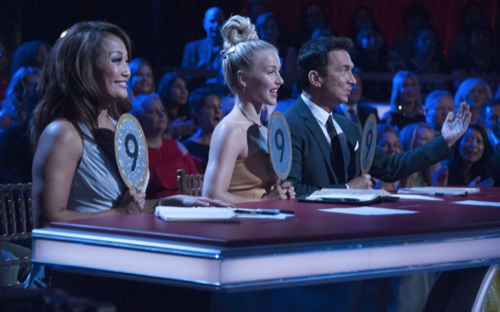 Tonight on ABC it’s another Dancing With The Stars elimination of Season 23 and sadly we will say goodbye to another celeb. On tonight’s performance episode, it was Latin Night and the remaining celebs danced a rumba, salsa, samba, paso doblé, cha cha or Argentine tango.

The night kicks off with Pitbull performing his hit song “Greenlight,” featuring Flo Rida and LunchMoney Lewis, then each celebrity will go on to perform a captivating and alluring Latin dance. Pitbull will also join Bruno Tonioli, Carrie Ann Inaba and Julianne Hough at the judges’ table as a guest judge.

Amber Rose and Maks Chmerkovskiy were in danger of being eliminated. [VIDEO HERE] Amber and Maks dance the Cha-Cha for the DWTS judges, and then they waited to hear what they have to say about the performance.

There’s nothing BLA BLA about #TeamSpicySalsa’s Cha Cha! SO. MUCH. FUN! 🌶🔥 #LatinNight #DWTS

#TeamXL, your energy is unmatched! AMAZING JOB, you had us all clapping along! #LatinNight #DWTS

Less than TEN MINUTES until #LatinNight fires up! #DWTS