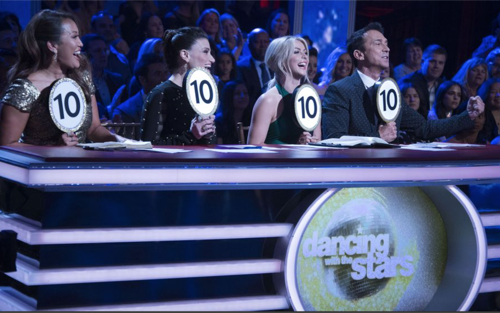 On tonight’s performance episode, at the end of the night, one couple will be eliminated, and the four remaining couples will advance to the finals.

On tonight’s DWTS semi-final each couple will dance two dances – one being a style the couple has not danced to yet, and the second being a Trio Dance.  In their first dance each celebrity will perform a foxtrot, Argentine tango, tango, rumba, quickstep, samba, jive, salsa or paso doblé. At the end of the night, one couple will be eliminated, determining the final four couples who will go on to the finals to vie for the mirrorball.

We are going to find out who is going to the finals next week.  The first couple safe is Laurie Hernandez & Valentin Chmerkovskiy followed by James Hinchcliffe & Sharna Burgess.  Also dancing in the finals are Jana Kramer & Gleb Savchenko and Calvin Johnson Jr. & Lindsay Arnold.

Make sure to join us next week when we will be covering the two-night finale of DWTS.  Who do you think will win the Mirror Ball Trophy.  Hit the comments and let us know!