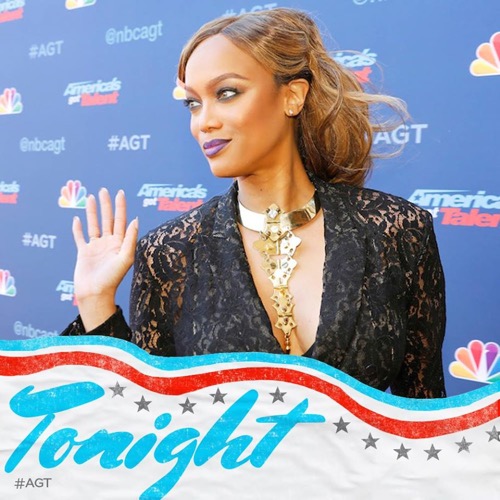 Tonight on NBC America’s Got Talent begins its new season with an all-new Tuesday, June 6, 2017, episode and we have your America’s Got Talent recap below!  On tonight’s AGT season 12 episode 1 premiere episode as per the NBC synopsis, “The auditions continue with creator and executive producer Simon Cowell at the judges table alongside Mel B, Heidi Klum, Howie Mandel and host, Tyra Banks.”

Make sure to bookmark this spot and come back later for our America’s Got Talent finale recap from 8 PM – 10 PM ET! Refresh often so you get the most current info! While you wait for the episode head over and check out all our AGT spoilers, news, recaps & more!

Edna Moore (from Florida) and her dog Mia Moore are the first to perform of the night. Edna says Mia can read and do math problems. She also has more clothes then Tyra. The judges say a number and Mia barks that number of times. After success with two numbers Tyra picks a card with a number, 20 and Mia barks 20 times.

The judges give Mia and Edna four YES votes. The next act is Diavolo: Architecture in Motion, a performance dance group from Los Angeles. The dance using a giant tilting structure that moves and the crow loves it. Howie has never seen anything like it in his life. Heidi thought it was incredible. Mel found it very exciting. Simon thought it was quite clever. The group gets four YES votes.

The next act is 21 year old Chace Goehring from Tennessee. He will sing an original song he wrote called “Hurt”. Chace was very shy growing up but music has helped him open up. The crowd and judges give Chace a standing ovation after his performance. Howie was very impressed by his unique sound. Heidi loved his confidence and thinks he is very talents. Mel thought it was fantastic and Simon sincerely thanks Chace for coming on the show. Chace gets four YES votes. He will move on to the next round.

The next act is Jimmy from Chicago. He and his partner Judy perform a hand balancing act. They hope their appearance will lead to a big show in Vegas. Jimmy’s partner takes the stage and is a blow up doll. The crowd and judges groan as she is lowered onto the stage. Simon hits his buzzer almost immediately followed by Heidi. Howie found the act quite funny as did Mel. Howie and Mel vote yes while Heidi and Simon vote NO.

Eight year old Paige and nine year old Arteon are the next to perform. They do a very cute dance to “I’m a Barbie Girl”. Not even half way through their song Simon hits his buzzer. He thinks they need more experience and he just wasn’t feeling it but he did love their chemistry. Heidi, Mel B and Howie vote YES while Simon votes NO. They will move on to the next round. The judges taunt Simon with “come on Barbie lets go party.”

Nick from Ohio is the next act to perform. He is a science teacher for the masses. He believes science can be the next big act in Vegas. You never know what can go wrong with science. Nick thinks science is so cool it is an act that can win a million dollars. He has Mel inhale from a balloon her voice goes very deep.

All the judges inhale from the balloons and speak in low voices. Nick completes a second experiment with Mell and Howie which creates a huge mound of foam. His final experiment involves Howie emptying a bucket into a trash can which causes a huge explosion. Howie, Mel, Heidi and Simon all vote YES.

The brother and sister act of 30 year old Billy and 27 year old Emily are the next to take the stage. They are acrobatic roller skaters who have been skating together for 20 years. Their act is very exciting and involves several tricks where Emily flies in the air. Howie can’t believe how dangerous the act was and he was blown away. Mel found their act crazy good. Simon found it death defying. All four judges vote YES.

Angelica is nine years old and in the fourth grade. She has been singing since she was two years old. If she wins America’s Got Talent she would get a puppy. She is from Georgia and hopes to be the next Whitney Houston. Everyone is blown away by her voice. Simon can’t believe what a huge sound came out of such a little girl. Heidi thinks she will be a superstar. Mel runs onto stage to give her a big hug. Howie predicts all of Angelica’s dreams will come true. She gets four big YES votes.

The final trick involves a member of the audience standing on a shovel on the brother’s neck. Howie and Heidi both hit their buzzers trying to get the brothers to stop the dangerous trick but no one is hurt as the act is completed. Howie thought it seemed like a buffet of torture and Heidi found it horrible to watch. Simon and Mel vote YES. Heidi votes NO. Howie hated it but gives the act their third YES because the audience loved it.

Colin describes himself as the real life Sherlock Holmes. He is the closest thing to a real life mind reader you can see. Colin immediately tells the audience what the profession is of the first two people in the audience. He asks Tyra to come onto the stage. He does amazing tricks involving the audience, the judges and a coin. Everyone is blown away by his act. Howie was mesmerized and amazed. Simon thinks he and Colin could take over the world together. He gets four YES votes.

The last act of the night is Mandy, a deaf singer from Florida. She lost her hearing when she was 18 years old and has been deaf for ten years. Music isn’t about the sound anymore for her, it is about the feeling. She sings an original song she wrote called “Try”. Simon hits the Golden Buzzer and sends her immediately to the live finals.