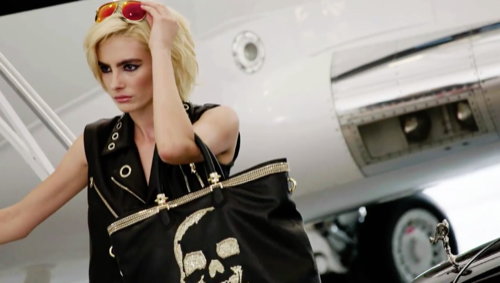 Tonight on VH1 America’s Next Top Model (ANTM) airs with an all-new time.  ANTM airs with an all new Monday, January 30, 2017, cycle 23 episode 8 called, “The Glamorous Life” and we have your weekly American’s Next Top Model recap below.  On tonight’s ANTM episode as per the VH1 synopsis, “The models are invited to an exclusive party at luxury designer Philipp Plein’s estate. Later, the ladies compete for the best couple shot as they pose for a luxurious-lifestyle shoot.”

America’s Next Top Model (ANTM) begins tonight with the models watching India’s music video, cheering her on. They are halfway through the competition this week. Tatiana feels she is overshadowed by the big personalities and is just riding it out with good criticism. She wants to win this for her family, so she can provide for them.

Kyle was in the bottom two with Marissa, which was very difficult since they started their little romance. Marissa is reading a letter Kyle wrote her, and she misses her but says she can cuddle up with her when she wins. Binta reveals it was a very difficult panel for her, she is emotional after hearing people hated the work she loves doing. She is also fighting for her parents.

In the kitchen, CoryAnne talks about how Courtney is always complaining about everything and she doesn’t like her. Courtney is disrespectful and making the environment toxic in the house. CoryAnne tries to confront her but ends the conversation when Courtney and her can’t see eye to eye. Courtney admits the house is wearing on her, calling most of the girls “bitches”.

The RitAlert arrives and she tells the 8 of them its time to get a taste of the high life. This week they want to remind the models of what they are aiming for – a life of luxury. She tells them cars are outside to bring them to a friend of hers, Philipp Plein. She reminds them to be a boss and command the room.

The girls arrive at the Philipp Plein Studio and they are trying on clothes and accessories. CoryAnne and Courtney are still at odds and Courtney is not in a good mindset. CoryAnne admits that she is high maintenance and shallow, claiming she has a perfect life. Courtney rolls her eyes as CoryAnne says she feels like Cinderella.

Philipp Plein tells the models he is hosting an exclusive party at his house and they will be the feature attraction because they are wearing the latest couture collection straight from the runway. All the dresses are more than 10-thousand dollars. They are to do a fashion editorial featuring them. They are to be paired off to work each room.

Tatiana and CoryAnne, Paige and Binta, India and Courtney, and in the final room is Cody and Marissa. It will be the party guests who will vote which duo makes the best fashion editorial of the night. The prize is whoever wins, Philipp Plein will take them to his store on Madison Avenue and they can choose whatever they want in the store.

Philipp greets his guests and tells them to visit each room, and vote which models they like the most. Law Roach says he wants to see more editorial and less modeling. Cody and Marissa are screaming and others feel they are making fools of themselves and it was very unprofessional. Binta and Paige’s room is completely empty and Philipp tells them to start using more poses and this is high end fashion but it is already too late for them to have a few scenes.

At the end of the night, the models gather with Law Roach, Jason DeRulo, Drew Elliott and Philipp Plein. The votes are in and the winners are room number 4 who was Marissa and Cody. Courtney is surprised saying they were not elegant and sexy.

Marissa and Cody leave with Philipp Plein in his Rolls Royce, where they can choose an outfit for themselves. Marissa jokes that she feels like Pretty Woman, except for the hooker part. They choose their outfits and return home.

Back at the house, the models are called into the living room for a RitAlert. Rita tells them they are now going to a photo shoot with Philip Plein in another luxurious setting. They are either going to have to fly right or risk going home. She wishes them good luck.

They arrive at Essex County, NJ at a private air field, they enter a room that has Philipp Plein’s clothing. Drew Elliott arrives with Philipp telling the women they are going to be photographed living the lux life in a private jet. Jason Derulo is going to pose with them in the photos, all the models cheer. He tells them it is a chance for some of them to redeem themselves and they need to make him look good.

Paige and Tatiana did really well then CoryAnne doesn’t do a good job. Philipp doesn’t like her expressions and she wasn’t so good. Paige does a wonderful job, when Courtney is off and didn’t bring any energy for the camera. Jason says Hello and Goodbye to her, she completely ignored him in the shot.

Marissa has never been on a private jet and jokes with Drew about wanting to join the mile high club. She is worried about her breasts popping out all the time. Jason comments on how Marissa just owns the photo like she did the previous night. Cody does a good job too.

Binta is told to find an insanely bitchy attitude. Philipp encourages her to own it, when Jason joins in for the photo, everyone is trying to guide her, but the photographer says these pictures are boring. Drew tells her to work it. Its a wrap and they thank Jason for participating.

The models are all nervous about panel, CoryAnne decides to talk to Courtney about her life. Courtney reveals she was homeless until she was 7, and then her mother was a hoarder. She reveals she raised herself and never heard the words “I love you” from her mother. Cory breaks down crying, saying no one deserves to be treated like that and everyone deserves love. Cody and Cory both hug Courtney.

At panel, Rita greets the models introducing them to judges Ashley Graham, Law Roach, Drew Elliott. Courtney is lectured severely from Drew when she complains about having allergies again during the photo shoot instead of taking responsibility for it.

The models return after the judges deliberated. The best photo belongs to Tatiana, this is her first best photo. India, Cody, Marissa, Paige, CoryAnne are safe; leaving Courtney and Binta in the bottom two.

Rita said when the competition started, they were the girls to beat. She tells Binta she is amazing and she needs to know that about herself. She has a beautiful face but for the last few weeks they haven’t seen it in the photos. The judges worry that her insecurity has gotten the best of her in the competition.

Rita tells Courtney it is clear the camera loves her, week after week her face delivers but the competition is more than just being a pretty face. At this point, she should be getting better and better, not worse. Courtney is safe for another week and another chance to be America’s Next Top Model.

Rita hugs Binta, reminding her to remember what she said. Everyone says good bye to her and Binta promises she will be a successful model because it is part of her.