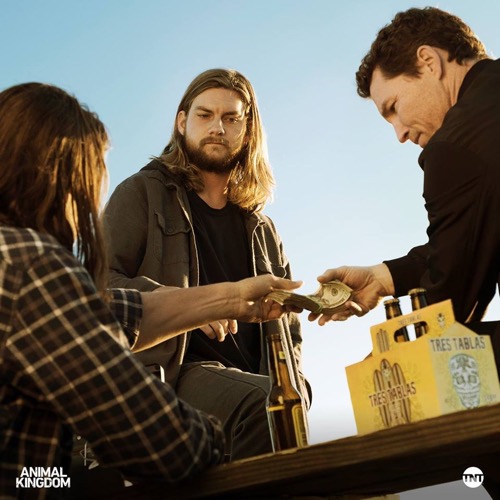 Tonight on TNT Animal Kingdom premieres with an all new back to back Tuesday, May 30 season 2 premiere Animal Kingdom recap called, “Eat What You Kill.” On tonight’s Animal Kingdom season 2 episode 1 premiere as per the TNT synopsis, “A risky heist misfires and the boys blame Smurf, sending shock waves through the family, in the Season 2 premiere. Also: Baz deals with being a single parent and Deran plans for the future.”

Tonight’s finale episode of Animal Kingdom looks like it is going to be great and you won’t want to miss it, so be sure to tune in for our live Animal Kingdom recap at 9:00 PM ET! While you wait for our recap hit the comments and let us know how excited you are about the season 2 premiere of Animal Kingdom.

Joshua “J” Cody was now involved with the family business. Before, he had simply covered for them and had mostly tried to keep his personal separate from what his extended family were doing however things must have changed since then because now J didn’t care about what was right or wrong anymore. He just wanted to belong somewhere and unfortunately the Codys had welcomed him with open arms. But being part of a crime family meant that he had to take the same risks as they did. So J had had a part in the latest sting and he had helped his uncles steal a safe they thought had plenty of case.

However, the safe as it turns out had been empty. The Codys had gotten bad intel and had gone through a lot with breaking and entering yet all they had gotten for their strife had been maybe three grand and they all knew that it wouldn’t last them. So that got the uncles to thinking. They questioned why they were going after such small winnings when they could be hitting it bigger elsewhere. And so the uncles had had something to say to their matriarch when they got home. Smurf had been the one to pick the brewery after all and therefore they thought it was her fault that they made off with so little.

So the guys had tried to tell Smurf that she had gotten it wrong and that they maybe they should be try new leadership though naturally some hadn’t been kind when they brought that up. Pope had accused Smurf of being manipulative and not caring about any of them so he simply wanted to walk away. He thought that he would have better luck if he went it alone and he couldn’t stand to be around his mother since she convinced him to kill the only woman he’s ever loved. Yet, the others had decided to stay on to see if they could reason with their mother. They told her that they were the ones taking the risks and that they should have more of a say.

Except Smurf had thought they were all ungrateful with the way they were acting. She reminded them about all the times when they thought they would go it alone and she had been forced to rescue them. But Baz had told her that she couldn’t keep holding the past over their head and that he had been the only one that had vouched for her when all the others were quick to abandon her because they thought she was a cold-hearted bitch. So Smurf had told them all to just go then. She said that they would be crawling back to her eventually and that they wouldn’t make it a day without her. And so the only one that wasn’t quite ready to leave Smurf’s side was J.

J didn’t know his grandmother as well as his uncles did. Though he still sort of cared for her in his own way and so the others got to talking about what to do with him. Deran and Craig thought that they should start being nicer to J, but Baz was still uncertain about the teenager. He admitted to Pope that he wasn’t sure if he could trust J and that he would be keeping a close eye on the boy if he decided to join them. So J also had to choose if he wanted to join the others and he had talked about that choice with Smurf. Smurf had said it was fine if he wanted to do jobs with them and she said that he wanted to join them that he couldn’t be a spy.

Smurf warned J about spying on the others for her because she knew that her sons would punish him for it if they were to find out. However, Smurf had told J that no matter his decision he could stay with her at the house and she had given him a credit card as well so that he could get around. So it was like J had taken the place of her sons overnight. Smurf had needed someone to take care of and J became that someone for her yet that didn’t mean that Smurf didn’t miss her actual children. She had first wanted to punish them by cutting them off and taking their credit cards only she had felt bad about that afterwards.

Smurf had realized that she couldn’t keep pushing her kids away and she knew that the last job being a bust had been her own fault because she confused Thursday with Tuesday. So Smurf had tried to patch things up. She invited the whole family over for dinner and she had been on her best behavior with all of them however the others hadn’t been so willing to try as well. The guys hadn’t wanted to talk to Smurf or even tell her about their latest job that they had plan for themselves and so eventually Smurf got the picture. She saw that her sons had wanted to do everything on their own without her.

But Smurf told the guys that they could always come to her for help and, while no one wanted to admit it, they did need her. The guys had gone back forth on holding up a wedding on a yacht to stealing from a church. So they had needed a deciding vote except Baz hadn’t wanted that vote to be J and he didn’t think either Deran or Craig should be making decisions. Craig was high all the time on coke and was still running around with J’s ex-girlfriend Nicky meanwhile Deran was still seen as the baby of the family. And so Baz had wanted it to be just him and Pope making the decisions because they knew how to get things done.

So that had upset Deran. He had put a lot of thought in robbing the yacht and he thought that he could make the plan work if the others would just work with him and not against him. Yet, Deran also had some big dreams. He apparently wanted to use the money from his next job to buy a bar and have something legitimate of his own so he couldn’t stand it the way Baz and Pope would shut him own, but that was merely the beginning of their problems. Everyone had had an opinion and no one was a deciding factor. And so Craig had mentioned Smurf’s rules because that was the only thing he knew and he could see that nothing they were coming up with was working.

Baz still missed Catherine and had wanted to replace her with his side-piece and Pope was still a mess from killing Catherine so he was acting as a surrogate father to Lena seeing as Baz couldn’t take being around his daughter.

And if this was how they acted without Smurf then how long will they last without her?