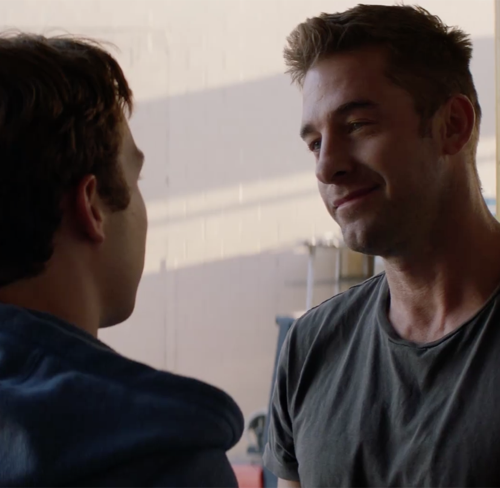 Tonight on TNT Animal Kingdom premieres with an all new back to back Tuesday, June 20 season 2  episode 4 Animal Kingdom recap called, “Broken Boards.” On tonight’s Animal Kingdom season 2 episode 4 as per the TNT synopsis, “The bar is set to open, but Deran worries about telling Smurf about it. Meanwhile, Pope and Amy go on a date as Nicky must choose between Craig and J.”

Tonight’s episode of Animal Kingdom looks like it is going to be great and you won’t want to miss it, so be sure to tune in for our live Animal Kingdom recap at 9:00 PM ET! While you wait for our recap hit the comments and let us know how excited you are about the season 2 episode 4 of Animal Kingdom.

The new living situation at the house isn’t doing anyone favors. Smurf would hear a sound and would quickly go for her gun because she didn’t know who was coming in or going out however she later made a guess and told Nicky that Craig should come in through the front door next time. But Craig sneaking into Nicky’s room wasn’t the only thing she had to worry about. She had also checked in on J when she had heard sounds in the house and she had noticed that he wasn’t in his room. He had apparently gone running and hadn’t thought to tell her. So she was worried about him and thinking about what he was up to.

But Smurf had found out that he was alright in the end and so she had tried a different approach with her grandson. She thought that she could entice him into spending more time with her by suggesting they hit another place like they did the dinner from last week although this time around J said he couldn’t do it. He said he had to do something and she knew that “something” meant going to work with his uncles. So Smurf didn’t push J on the matter and she let him go run off to have fun with his uncles except she told him that maybe the dinner hold up could be just the beginning. She thought that he had potential and had even admitted it to him.

Smurf told J that she saw big things for him and it went unsaid, but she saw those bigger things for him with her at his side and not his uncles. So J knew that he had options when he eventually showed up a meeting that Baz called and found out that he was going to be put in the vent when they robbed the church. But J told Baz and Pope that he had done a job with Smurf and that he could be doing other things. Like helping with the money grab or whatever else they needed as long as he didn’t have to do into the vent. J hadn’t wanted to do that and neither for the matter did Craig who expressed his feeling quite loudly.

Craig had practically lost it during the trial run and had cursed his way out of the meeting with the others because he couldn’t stand it that Baz was treating him like a runt. He too felt like he deserved better than that and had told Baz that he was out. As in he didn’t want to follow through on the job. But Baz was already short-tempered and had taken all of his anger out on the people he could. He was snippy with J and had gotten in Deran’s face afterwards. So Deran had had to tell Baz the truth. He told him that he got a bar and that it was the reason why he hadn’t be around so much yet all Baz had wanted to hear was that Deran was still in on the job and so Deran had reassured him.

Deran said that he was still in and that he already knew what he had to in case Baz was wondering. But Baz had still been upset about Deran not showing up when he called a meeting and hadn’t been in a great place when he stopped by Smurf’s. Smurf was still watching Lena for him and making excuses for him with his daughter that rarely saw him however Baz hated it when she made him feel like a failure and so he told her why he actually came by. He said that he had wanted to get his hammers out of storage and that he needed the new code to get back into the building. Only Smurf didn’t want to give him the new codes.

She reminded Baz that she owned the building and that she had probably paid for those hammers as well. But Baz didn’t want to get into it with her and he also hadn’t wanted to answer any of her questions when she brought up the church. So Baz had thought that he could show off and tell her that they were doing just fine with her though Smurf knew what buttons to push in retaliation. She told Baz that she trained him and that he had become her without knowing it. And so that naturally upset Baz. He and the others had decided to stop working for Smurf because she was such a control freak and he hadn’t wanted to turn into her.

So Baz later called another meeting and that time he had apologized to his brothers. He said that he shouldn’t have tried to control them because that was what Smurf wanted. She wanted them to fail so that she could be right about them and Baz hadn’t wanted to give her that satisfaction. But getting his brothers back onboard and convincing them that he wanted things to be different had required something from Baz. Baz had realized that they needed to have fun again and so he had taken them to a construction site where they stole a crane and dived off it. And, you know what, they had fun.

They had laughed and, while they hadn’t quite forgiven Baz for his earlier behavior, they had acknowledged that Baz wanted things to be better for them. So Deran was still going ahead with the job and Baz had even taken out the grunt work because he said that he could go into vents. But Deran had later thrown his big grand opening at the bar and he had invited everyone. That is everyone over the legal drinking age and who wouldn’t get Deran’s bar shut downed. So his brothers had showed up and Smurf had made an appearance yet out of all of them it was Smurf that had ruined the night.

She had gotten up to make this big speech about how proud she was of Deran and that he had opened up his bar despite being the run of her litter, but Deran knew what she was doing. Smurf was making everything about her again and so he finally told her off for the way she treats him. He said that she couldn’t let him have his own moment because she had brought up his failed past as a surfer and then Deran had dropped a bomb on his mother. He told her that he was gay and that he couldn’t screw her so she might as well try her luck with either Pope or Craig if she wanted to chase after that illicit thrill.

And that had been more than he should have said however he hadn’t cared anymore. Deran had wanted to get away from her and Pope had managed to flee the bar the moment he saw his mother. So Smurf’s “boys” didn’t want anything to do with her and all she had left were J and maybe Nicky. Nicky was feeling somewhat lost in life and she looked up to Smurf as a mentor. Which was similar to how J felt about his grandmother. He had asked her to teach him and she was teaching him how to funnel money without the IRS ever finding out. So the only one that was truly suffering under Smurf’s care was Lena who didn’t have a father although she had a slight obsessive uncle.

Pope truly cared about Lena yet he took things a little too far when he sat outside of her room in order to be there for her if she cried in her sleep again.