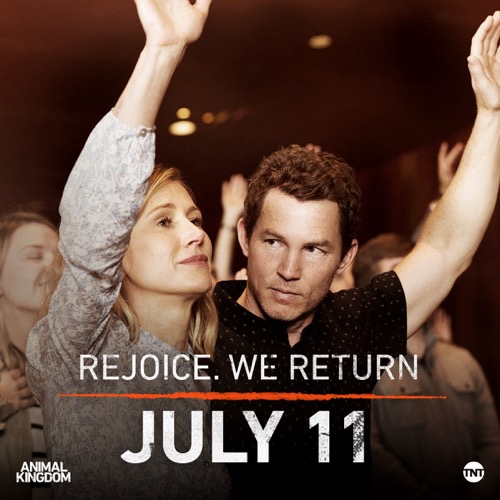 Tonight on TNT Animal Kingdom premieres with an all new back to back Tuesday, July 11 season 2  episode 6 Animal Kingdom recap called, “Cry Havoc.” On tonight’s Animal Kingdom season 2 episode 6 as per the TNT synopsis, “Javi puts pressure on Smurf, so she enlists J for help. Meanwhile, Baz faces a secret that was kept hidden by Catherine, and Pope and Baz clash following a megachurch job.”

Tonight’s episode of Animal Kingdom looks like it is going to be great and you won’t want to miss it, so be sure to tune in for our live Animal Kingdom recap at 9:00 PM ET! While you wait for our recap hit the comments and let us know how excited you are about the season 2 episode 6 of Animal Kingdom.

Craig was a mess. He had gotten lucked up after crashing his motorcycle under the influence and his teenage girlfriend had had to bail him out using her father’s credit card. But Nicky appears to be growing out of infatuation with Craig and his nonsense. So she’s started to low-key flirt with J again and the two were even back on friendly terms however there were things that J couldn’t tell her about and one of them had been the favor that Smurf had asked of him. His grandmother had seemingly needed someone to watch her back while she ran a few errands and she chose J.

J was smart and he could think on his feet. So Smurf enlisted his help as she did her best to gather Javi’s money before the trade-off and there was going to be a trade-off. Smurf had found out that Javi had gotten proof from an old friend of hers that had told him that she did in fact kill his father for a bigger cut of whatever con they were running back then. However, Javi didn’t just want a small paycheck every mother. He had wanted a lot of money and he hadn’t wanted to wait around for it. And so that meant Smurf couldn’t drag her feet.

Yet, Smurf didn’t know if Javi would be satisfied with the money alone and so she had wanted J to follow to get the money, but hadn’t wanted him to be there for the trade-off because she thought that part was too dangerous. So J had questioned Smurf about that and he had kept pushing until he finally got a few answers out of Smurf. Like how she had to pay off Javi to keep him out of their lives and how she had to pay him off seeing as he felt wronged by her. And so J hadn’t wanted to Smurf to go off by herself when he learned those few details. Except Smurf didn’t want to bring him.

Smurf was concerned about bringing any of her boys into the situations she had with Javi and so she thought that she could simply rely on her old friend Jake. Jake was Craig’s father and therefore Smurf never thought that he would betray seeing as they share a child together. But Jake had apparently gotten fed up with being bossed around by Smurf and he had stolen the money the first chance he could. So Smurf had been outraged and she had warned Jake that now both her and Javi will want him dead.

So Smurf’s plan had gone awry when she least expected it and she found herself trapped in a hotel room with no one to help her. See, the one person that knew about her problems with Javi and could help wasn’t with her. J had stayed put like Smurf told him and he had waited around at the house in case Smurf called or needed him for anything. And he had even skipped a meeting that Baz called. Baz and the others had wanted to divvy up the money and they were going through ways to funnel it when out of nowhere Deran decided that they weren’t going to launder any money out of his bar.

Deran said the feds tend to watch new businesses and he didn’t want to risk his new bar because his brothers had been too lazy to launder their money elsewhere. He and Craig had thought about that yacht hesist and they were already looking for that while leaving the current dirty work to Baz and Pope. Though Baz and Pope hadn’t been too happy about that. Baz was being watched by a cop friend knew Catherine and who also suspected that Catherine was dead. So he had to be a little more careful as he went about trying to clean the money and that was on top of his problems with Pope. Pope was still seeing Amy after the job was done and that put them all at risk.

Amy works at the church and the longer she kept seeing Pope the easier it would be to connect him to the robbery. The robbery had come out of the blue and had happened the same time that Pope started to show up at her church group. So Baz wanted Pope to stop seeing Amy and Pope had been clear when he said that Amy was his girlfriend now. However, Pope has had conflicting feelings about Amy and the robbery itself. Like how he was supposed to burn the donation envelopes that had been in the vault, but he hadn’t been able to burn them.

But despite everything that had happened, Pope had been the one to take Smurf’s call and he had rescued her from the hotel room. So he had gone with her back to the house and together they had found a badly beaten up J. J had told them about how Javi got in and had taken Nicky yet Javi hadn’t killed the teenager or truly hurt her in any way. He had just left her at the same place where his father was buried and that had been a message for Smurf. Javi was telling her that there was no turning back now and that it was war…

So Smurf was preparing herself to do whatever necessary to protect her family!