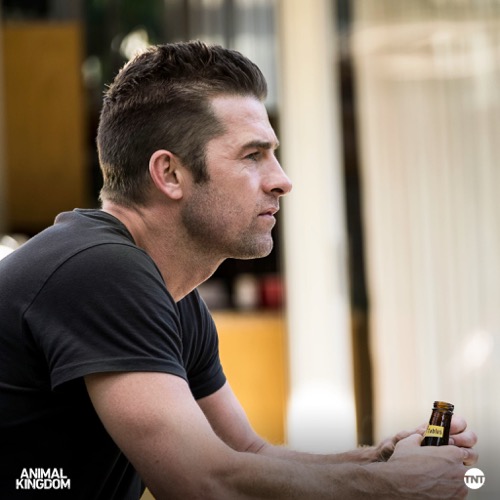 Tonight on TNT Animal Kingdom premieres with an all new back to back Tuesday, August 15 season 2  episode 11 Animal Kingdom recap called, “The Leopard.” On tonight’s Animal Kingdom season 2 episode 11 as per the TNT synopsis, “Baz orchestrates his plan to take down Smurf as Marco cashes in a favor with Craig and Deran. Elsewhere, Pope seeks the truth behind a death.”

Tonight’s episode of Animal Kingdom looks like it is going to be great and you won’t want to miss it, so be sure to tune in for our live Animal Kingdom recap at 9:00 PM ET! While you wait for our recap hit the comments and let us know how excited you are about the season 2 episode 11 of Animal Kingdom.

Craig was in Vegas! He had ditched his teenage girlfriend to go hang out with his more age appropriate ex and so all Nicky got were a couple of text messages. Craig had gone a drug binge and so he would keep on forgetting the part where he broke up with her however, sending her several messages about how they should see other people didn’t exactly sound sincere when he would also text Nicky to come over for a quick screw. But she mostly ignored him anyways. Nicky was growing tired of his antics and she secretly missed J. J would look after her and he would also be there for her when she needed him.

Craig on the other hand, was good for mostly sex and drugs. However, Nicky knew that she could manipulate him in a way that she couldn’t with anyone else and that she could use her relationship with Craig to make J jealous. So Nicky played on that to get J to pay attention to her and she got him to do things for her. Like help her with her homework and take her to school and in exchange J didn’t realize that he wasn’t getting anything from her though by that point he didn’t care. He just liked being around and more importantly being needed. J was having a rough time as it was what with the crap that Baz pulled off that he was simply happy to focus on anything else.

Though Smurf unfortunately, wasn’t going to forget or overlook what happened by any means. She knew that Baz stole from her and she knew that Baz believed he could continue to manipulate J because she had bugged his house and had overheard crowing about his new life with his new girlfriend. So Smurf and Baz had it out. She told him that she knew and he admitted that he stole the money that he rightfully believed was stolen from him and the others, but Baz had also wanted something else. He had wanted the businesses and the buildings that Smurf owned because he wanted to launder his own money without her.

So Smurf had demanded to know how Baz thought he was going to get any of that and he mentioned the watches. The watches that he found in her hiding spot and the same ones that she has been sitting on. But Baz believed that Smurf had been sitting on those watches because they could be used as evidence against him and the others so he thought those watches were Smurf’s insurance. As in, if she ever wanted to get rid of one of them then she could show off a watch and send them to prison. So Baz told her to hand over her properties or he was going to ensure that she lose her family.

Except Smurf didn’t want to back down. She had been grooming J to take for a while now and she had recently made him become her power of attorney because she didn’t trust Baz if something were to ever “happen” to her. Yet, J was starting to become worried what with everything that Smurf was doing. She was digging up chests in the backyard that had money in it and then removing Baz as her power of attorney just to give it to J had made him think that something was about to happen. So J tried to ignore the signs and had hung out with Nicky for a while however things were happening that he ignore or change.

Smurf was making moves, Baz was making moves, and the guilt was getting to Pope. Pope’s new girlfriend had made him see how much damage he caused and that Lena now had no one to rely on because he had killed her mother. So Pope decided to question the detective that was investigating Catherine’s case. He had needed to know the truth and so he demanded to know whether or not Catherine was an informant, but Pope hadn’t reacted well when he found out that Catherine hadn’t talked. She had been given every incentive including finding out the truth about her parents and she still hadn’t talked. And so that broke Pope.

Pope had gone over to his mother’s place afterward to confront her and Smurf felt no remorse. She said that Catherine would have talked in the end and so Pope had gone after her. He had put his hands around his mother’s neck and he thought about killing her. But then he broke down and started to cry so that had made Smurf sympathetic at last. She had put her arms around him and had done her best to comfort him though that hadn’t been enough this time around. He had seen how poisonous she could be and he had left her to go seek actual forgiveness. He had gone to Amy’s and he confessed to her that he murdered Catherine.

He tried to explain that he was just trying to protect his family yet that hadn’t been enough to cover what he did and Amy no longer wanted anything to do with him so she dumped Pope. Only Pope was cut adrift and had no one to turn to after she did that. He couldn’t go to Bax and his younger brothers had gotten dragged into Marco’s mess. Marco had roped Deran and Craig into holding onto kidnapping victim for him and it turns out that his sister had been behind everything. She was the one that was pulling the strings and she killed that boy they kidnapped the second she had gotten paid. So there had been no turning back Deran and Craig after that and Deran later confessed that he was finished with the game.

Deran told Craig that he was out and he said that he wanted to focus on his bar. Yet, Craig didn’t want to be out. He liked the drugs and he liked the game so he was going to stay despite Deran’s decision to go and therefore the brothers came to a reluctant agreement. Deran said that he was going to stop protecting Craig and Craig thought he would survive without Deran. So the guys knew what they wanted for their future, but everything was up in the air the moment Baz called the cops on Smurf and had gotten her arrested for murder.

Now who knows what will happens next…