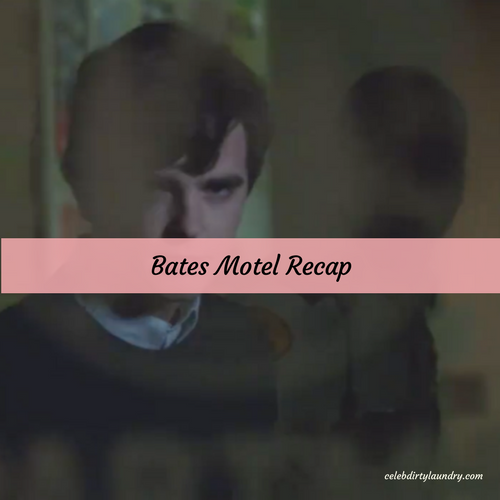 Bates Motel airs tonight on A&E with an all new Monday, April 3, season 5 episode 8 called “The Body” and we have your weekly Bates Motel recap below. On tonight’s season, 5 episode 8 as per the A&E synopsis, “Mother uses tough love to protect Norman; (Freddie Highmore) Sheriff Greene begins a murder investigation and Dylan gets his brother help.”

Bates Motel begins tonight with Sheriff Jane Greene (Brooke Smith) coaxing Norman Bates (Freddie Highmore) to talk to her about the call he made to 9-11, confessing to murdering Sam Loomis (Austin Nichols). He opens his eyes and sees his mother Norma (Vera Farmiga), he quickly closes them and opens them again, she is gone.

Norman begs for his meds and for the Sheriff to get him out of there and he will tell her everything. Sheriff escorts Norman out of the house, but his brother, Dylan (Max Thieriot) chases them down the stairs telling Norman not to say anything until he sees his lawyer. Dylan pleads with Norman to let him help him, but he gets no response.

In the interrogation room, Norman points to 2 different spots on the map. Sheriff Greene leans back and talks to him about the lake. He admits to being down there at some point, she reveals they pulled 2 bodies out of the lake; one was Jim Blackwell and the other was a female who was too decomposed to identify.

She asks him to tell her who she is. Norman is shaken but says he doesn’t know if he killed her, but it is possible. He tries hard to understand, but just can’t quite get there. She believes he is making it up, saying from where she’s sitting he looks and acts like a child and children act out when they feel ignored. She feels he is doing all this to get attention.

Norman says he is lonely, but he isn’t lying about this. He admits again that he killed Sam Loomis but doesn’t know why he did. As he is brought to his holding cell, an officer brings him some water and his medication.

He suddenly sees his mother sitting beside him, she tosses him on the ground demanding to know what he did. Norman fights with his mother, saying he did this to protect his brother. She drags him to the toilet and forces him to throw up the meds he had just taken.

She cuddles him saying he thinks she is a monster, but there is no good in the world but there is no one who is deserving of his kindness. She isn’t mad at him but she can’t let him do any more damage and tells him its time for her to fix this, but she can’t do that as long as he is there. She asks for his forgiveness than bangs his face off the toilet, knocking him unconscious. She says she will wake him up when things are safe again.

Dylan meets with a lawyer, Julia Ramos (Natalia Cordova-Buckley) at a diner, and shares what is happening with Norman. She wants to know all the details, Dylan explains that his mother-in-law came to the motel and disappeared without a trace but not sure if she just wanted to vanish or Norman did it. Dylan tells her Norman isn’t a bad person, nor a criminal, he is just crazy!

Sheriff Greene comes to his cell, Norman is looking in the window and his reflection shows him as Norma. She suggests they return to the interrogation room to try again. Norman asks her if it is standard procedure to question a mentally ill person without a lawyer present.

She seems caught off guard, saying Norman never requested a lawyer, in fact, he said he didn’t want one. Norman says he would rather just leave, and of course he said some crazy stuff, but that is what happens when he stops taking his meds.

He is sorry he has inconvenienced her but he wants to go home. She tells him he just confessed to murder, so they need to talk about that. He claims to know his rights and unless she is charging him with something, he is heading out the door. She places him under arrest!

Norman gets hostile as she reads him his rights. He wants her to show him proof and she says she doesn’t have to and that’s not how things work. She tells him to enjoy the accommodations, saying they aren’t as good as hi motel, but they do try.

Chick (Ryan Hurst) drives up to the Bates Motel, seeing police tape everywhere. He mutters, “No Norman”, and worries about Norman. He parks as an officer tells him the motel is closed for business as it’s an active crime scene. Chick retrieves a bag from his trunk saying he has business with the motel owner.

She informs him the house is a crime scene too; he wants to know if Norman is dead. She finally tells him Norman isn’t dead and won’t disclose any more information. He says she already told him by asking his name, she wouldn’t ask that if it wasn’t a murder investigation. He gets in his car and speeds off.

Julia Ramos comes to meet Norman, saying Dylan hired her. Norman makes it clear that she works for him, not Dylan and if her plan is to put him in a mental institution she can walk right back out the door.

She leans in saying she works for him, she will present it as a psychotic episode but he gave them more information than just the murder, he also gave them the dump site. Julia goes on to tell him that if there is a body he is going to have to explain why he lied about the murder. Norma takes over, asking Julia why someone would lie; she says someone else would have had to kill Sam Loomis.

Dylan arrives at a hotel in town and calls his wife, Emma (Olivia Cooke). He says he misses her and their daughter and tells her everything that is happening with Norman, saying no more lies. He is worried that Norman is really sick and confused. She admits she is worried about him, but he insists he is fine.

Julia taunts the Sheriff saying she was playing a little fast and loose with the rules; since the court house was open today and no papers were filed. She tells the sheriff that her client would like to be cooperative, despite his rights being violated.

Norman apologizes again but says he has no idea where the body is, IF there is a body. He admits he fell in love with Madeleine Loomis (Isabelle McNally); he was very lonely after his mother died and Madeleine was very similar to his mother, in looks and spirit.

He continues that Madeleine was lonely thanks to her cheating husband; he shares a story about Madeleine catching him with his mistress, and those tire marks in the driveway from her leaving with Sam, very angry.

He says Madeleine came back later that night, distraught and in shock saying Sam was dead. She talked about the woods and the well, that is all he knew. He felt vulnerable for her, feeling maybe he could rescue her since he couldn’t save his mother and that is why he took the blame.

Madeleine is called in to the police station. Sheriff Greene says they have reason to believe something happened to Sam, that her friend Norman Bates called saying he killed her husband; they have no evidence he is dead, but he is missing.

Madeleine breaks down crying but she continues the questioning. Madeleine has no idea why Norman would claim to have killed Sam. She says she only knew Norman a few weeks from coming into her hardware store. Greene tells her Norman is infatuated with her, asking if there is any basis for this infatuation.

Alex Romero (Nestor Carbonell) hobbles into Mary’s living room still searching for his gun as she sleeps on her chair. He finds it behind the pillow she is resting on, tucks it behind his back and heads toward the door and leaves.

Outside the police station, Greene is given news. She orders them to put Norman back in the interrogation room; she wants him to feel like he is being watched. Madeleine attempts to call Sam, leaving him a voice message saying he owes it to her to at least call her back; she stops mid-sentence when she sees Norman being brought out of his cell.

Greene comes to see Dylan at his hotel room, informing him they have found Emma’s mother’s body in the lake. Greene felt Dylan would want to tell his wife himself. She says she understands his loyalty to his brother, but he needs to consider cooperating with the police.

Romero arrives at Bates Motel, watching the Bates home from the back. He climbs the snowy hill to the house, rips the police tape off the door and walks in. He hears a noise and has memories of Norma climbing the stairs, smiling down at him. He goes upstairs, grief-strickened. He has memories of her in their bedroom.

Norman sits in the interrogation room, his mother telling him to be patient and if things go well in the morning, she could go back to be with him. She says she misses him.

Romero wakes up in his and Norma’s bed, hearing noises in the basement. He grabs his gun and heads down finding Chick typing while he is listening to Norman talking. Chick tells Romero he is there because him and Norman are friends. Chick says he will not call Norman crazy, after Romero says Norman killed his mother, Chick tells him that Norman loved her.

Chick informs Romero that Norman is in jail after he confessed to murder. Chick says he is there because he is writing a book about Norma and Norman. Romero says if he knows anything he is an accessory to murder; Chick scoffs saying, “says the escaped convict!”

Chick says he is typing in that room because he wanted to feel what she felt; Norman built it all for her, she was adored like a queen. Chick tells Romero that Norman dug his mother’s body up. Romero wants to know where her body is but Chick has no idea. He laughs at how Romero and Norman are worthy adversaries and how scripted drama doesn’t hold a candle to true crime. Chick begins to type some more, mocking Romero, who shoots him in the head, killing him instantly.

The police search the woods, when an officer stumbles upon the well, finding Sam’s body inside. Greene arrives on scene and smiles. Greene returns to the interrogation room informing Norman he is also being charged with the murders of Jim Blackwell and Audrey Ellis and leaves the room before he could respond.