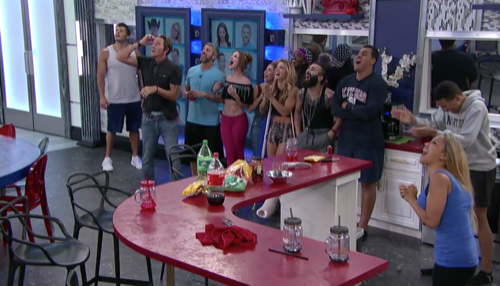 Tonight on CBS Big Brother 19 returns with an all-new Thursday, July 13, 2017, episode and we have your Big Brother 19 recap below! On tonight’s Big Brother season 19 episode 8 “Eviction and HoH” as per the CBS synopsis, “Another houseguest is evicted from the compound. The remaining players compete in an endurance HoH competition and then becomes the next Head of Household.”

Big Brother Season 19 (BB19) begins tonight after the Power of Veto was awarded to Paul who removed Josh from the block and replaced him with Cody; leaving Ramses, Alex and Cody up for eviction. Tonight, one of them will be evicted and Christmas will announce whether she chooses to stay or leave.

BB19 host Julie Chen announces that the house guests have no idea that whoever gets evicted tonight will join the other evictions next week to get a chance to get back into the Big Brother house in the Battle Back Showdown.

When the meeting is adjourned, Josh asks who wants meatballs, points to Cody and says he is sure he wants some as his last supper. Cody continues to call Josh a “man child” “Coward” and a “victim”. Josh jokes that Cody will hop his way out of the house and look like a fool and victim when he meets Julie.

Josh starts blasting Jessica who tells him to change his diaper and shut up. She tells Josh he is literally a pawn in the house while Alex is enjoying Josh causing all the drama; joking how fun it is being on the block watching them self-destruct. Ramses is confident he is safe sitting next to Cody.

Cody shakes Paul’s hand thanking him for keeping it real; Cody says it seems like Paul is the only other Alpha in the house and doesn’t blame him for being competitive and needing to take him out.

Christmas returns, asking everyone to join her in the living room for an announcement. She needs surgery for her foot and it is up to her if she wants to leave the game or have surgery and recover in the Big Brother house. BB19 will not be altering any of the games for her; she will be able to compete in some and not in others. She chooses to be the Queen of Perseverance and stay in the game.

Cody sits in his frog suit saying he isn’t feeling any sympathy for her, hopping away while Christmas continues to talk. Jessica claims that she needs to mend fences as her game isn’t over, they speak in private. Christmas waits until Jessica stops speaking and reveals she felt personally attacked by Jessica, who cuts her off and Christmas tells her to give her the courtesy to finish. When the conversation goes no where, she tells her to just live in the house together. Christmas is very suspicious of her timing but promises to try get past what happened.

Julie updates that Christmas’ surgery was successful but she hasn’t been medically cleared to return to the Big Brother house. She will however, join us live from her hospital room to cast her eviction vote.

Today is Dominique’s birthday and Raven makes her a gluten-free birthday cake, everyone shouts happy birthday as most of them sit around and eat cake. Jessica goes to another room crying as she is stuck on slop and can’t even enjoy eating cake with the other house guests. Cody joins her in an attempt to comfort her, feeling bad for everything she has gone through so far in the game and he is willing to do anything to salvage her in the game.

Cody comes to see Christmas and apologizes for being a jerk; he feels she is going home and hates the position he has put Jessica in and decides to stir the pot a little bit. Christmas wants to know why the animosity; he says Mark and Dominique pushes him into putting her up on the block but as soon as he did it, Dominique claimed to change her mind and wanted to keep Christmas around.

He admits that her connection to Paul was also a factor but encourages Christmas to align with Alex and Jessica. She says she appreciates him saying it but isn’t sure why he is saying this now. She does see red flags when it comes to Mark and Dominique, as they both keep their distance from her. Cody continues to insist that Jessica had no idea about him putting her up on the block.

Dominique does her show, interviewing the house guests. When she interviews Cody he immediately admits he didn’t like Paul as he felt he was loud and brash. Josh asks him a question and Cody refuses to answer anything from Josh.

He says he wanted Paul out but the decision was never just him, there were always one or two people who knew what decision he was making. Mark confronts him about it and Cody refuses to say anything else. Mark said by him making that statement he is trying to improve Jess’ game. Cody demands to know if Mark is implying he will go after Jess now; Mark simply says its a statement.

In the Head of Household (HoH) room, Paul reassures Mark that Cody is only dropping a couple bombs before he leaves and to not worry about it. He says that whatever Cody says doesn’t matter but when Dominique referred to the showmances as an organic group and after that spew Paul is safe but those couples are not safe. Paul wants to push on the cracks Dominique made but warns if Dominique keeps going down this path she may be on the opposite end of the hosting show and end with the exiting interview with Julie Chen.

We head to the living room where she reveals to all the house guests about Christmas and her surgery and she will be casting her vote from the hospital. Before the voting begins they each have a chance to persuade the votes.

Alex hopes they know her well enough to keep her in the house. This has been the greatest experience and hopes that those who have seen her compete know that she deserves to be here and asks them to please not evict her.

Ramses says this sucks being in the position as he had to nominate himself. He hopes they don’t vote to evict him, he loves his time with them and hoping to have more of it. He begs for them to not evict him to leave on a night where he nominated himself.

Cody stands and says Paisley, love and miss you kiddo and tells her not to be a Beta. He turns to Jessica, thanking her for staying side by side with him; he is extremely humbled and will miss her a lot.

All the votes are in and Julie announces that Alex is safe with 0 votes. By a vote of 7-3 between Ramses and Cody, Cody is evicted from the Big Brother house. Cody carries Jessica to the front door, leaves, drops his bag and joins Julie outside. The house guests watch as Cody’s face goes dark. Elena hugs Jessica and says she feels bad for her.

Outside, Julie asks Cody about what we just heard, he admits he just asked Jessica to be his girlfriend. Cody confirms he wants to pursue this relationship outside the house. Julie asks him about the thinking behind trying to blindside Paul, he felt someone would have talked him out of it so didn’t want anyone to know. He admits that Jessica calls him the worst player in Big Brother history. He also acknowledges that once he went after Paul he knew he had to go after Christmas too.

Julie asks him why he stirred the pot and made accusations? He said the guys were all groupies to Paul and he holds court. When he hosted the HoH competition, he saw that his alliance was over as everyone bowed down to Paul. Cody swears there is no loyalty in the house and should have played more with his mind than his heart. When asked if there is anything he would do over again, he said nothing but the Den of Temptation is what ruined the game.

Julie Chen says there is another twist in the game that no one in the house knows about; Cody, Cameron, Jillian and whoever is evicted next week will get the chance to battle their way back into the game. He has tears in his eyes, surprised that anyone even cheered for him when he came out. He is shocked by the possibility of returning.

They remaining house guests begin their Head of Household (HoH) endurance competition; Paul is not eligible to compete. Julie informs everyone that even if Christmas was there she wouldn’t be allowed to compete. This competition is called Space Cadets and the concept is to hold on for dear life, and the last HG who remains standing on the arm of the space station will be Week 3’s HoH. The HGs are gripping the wall as it tilts back and forth.

Please remember voting is still open for the Den of Temptation’s 3rd temptation called the Halting Hex. Choose wisely everyone as a House Guest can only be tempted once in the season. Be sure to tune into CBS’ Big Brother Season 19 (BB19) to find out who wins the next HoH and all the drama unfolding inside the Big Brother house!