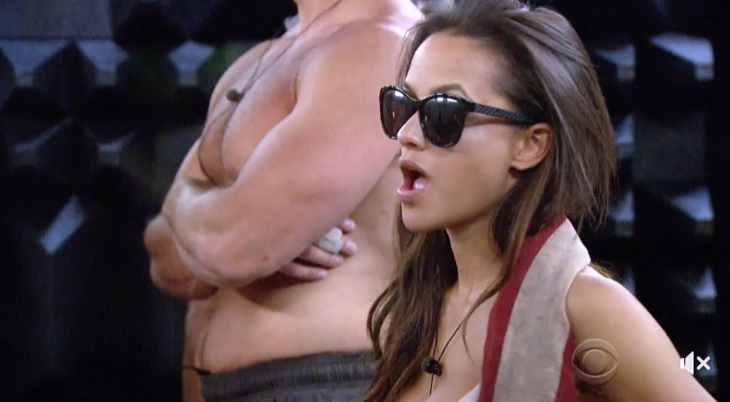 Big Brother 19 (BB19) begins tonight right after Cody nominated Alex to be on the block replacing Megan who self-evicted. Elena feels putting Alex on the block is good for her and the people she is working with because she is a fierce competitor and needs to go. Jillian thinks that anyone who associates with her is being put up, but Alex is determined to win the Power of Veto (PoV) and take down all the showmances happening in the house.

Jessica and Cody are kissing in the Head of Household (HoH) room, talking about him becoming emotional when he chose Alex; Jessica likes seeing that side of him but not when it comes to Alex. She is clearly jealous of his connection with her. Paul wants to lean in where the power is even though he wants to keep things on an even keel. Cody however, is not buying it and simply doesn’t like Paul.

Alex is sure if Jason wins the PoV, he will be safe and save her as well. Cody tells Alex he is sorry and even though she is disappointed, she understands its only a game. He is confused that she wouldn’t roll over for the girls and regrets putting her up on the block.

The Den of Temptation appears on the TV screen, revealing that since one housemate took the temptation they now have to suffer the consequences. Cody announces that one by one they will enter the den and place a hand in the serpent’s mouth and one of them will be bitten and cursed; only the bitten house guest will know what the curse is.

They all stand in a line to enter the Den of Temptation (DoT). Ramses is the second person in the DoT and he is bitten. Unfortunately, this curse will force him to put himself on the chopping block prior to nominations within the next 3 ceremonies as a special third nominee thus revealing his curse to the house.

Cody announces there are only 6 players to compete in the PoV competition: the HoH, the 2 nominees and 3 other players selected by a random draw. Cody picks Matt, Alex picks Raven and Jillian picks Jason; Kevin will be the host when BB19 informs them when the competition is to begin.

The housemates go into the backyard where there is beach stuff all over including Kevin dressed as a mermaid. He welcomes them to Big Brother’s Resort, they are to pull the plug on their aqua-clock race to the water to gather a starfish and stack them up one at a time, but they must remember to put water in their clock; if it runs out of water their score will be locked in. The competitor with the highest score wins the PoV, but there is a temptation.

If you are the house guest who finds the large golden starfish you can avoid being a Have Not for the rest of the summer but if they do that, the one who takes it will immediately eliminate themselves from the PoV competition.

Raven finds the temptation starfish and is out of this competition. Alex steals some of Matt’s starfish that he stockpiled in front of his stand. Matt stops with 10 on his stand, feeling no one else will be close to him. Jason stops with 14 starfish and sits beside Matt.

Alex worries that Jason doesn’t have enough to save her as Cody’s starfish keep falling, he sees Alex is doing well and wants to fold and let her take it. Jessica sees red flags feeling he is trying to give Alex the win. Cody locks in with 2 while Alex takes the lead with 16 starfish and Jillian locks in with 10. Alex wins the Power of Veto (PoV). Cody is extremely happy but can’t show it now excited to go after the person he wanted to get from the start.

Josh congratulates Alex for a doing a good job; Alex feels Cody needs to deal with his shomance now that he threw the competition; she doesn’t need the help of any man but he has exposed himself and reassures her that its okay and he has a plan. Jessica is irked that Cody did that because had it been Megan or Josh about to win, he wouldn’t have given up. She tries to process what he is doing because it puts their group in jeopardy.

In the bathroom, Alex tells Jason that she thinks Cody threw the game for her now Jason worries he is a sitting duck. Paul goes to the HoH room giving Cody a couple pointers suggesting he goes after Alex’s closest ally, Jason and Ramses is a smart kid. He enjoys being the puppet master as he is safe for the next 3 evictions; Cody is just disliking Paul more and more and if he wants his group to last he needs to get rid of Paul.

Jessica tells Cody that he threw her off when he didn’t try to keep Alex on the block. Cody attempts to tell her that he wanted to win the competition. He hopes that he doesn’t reveal everything to her as she keeps interrogating him. He says he isn’t worried about Alex even though their whole group is. She hates that Cody’s relationship with Alex could put a wrench in their plans and is making everything worse. She begs him to play it safe for one more week but he refuses saying he will never play it safe.

Paul comes to see Cody, wanting to feel him out without him discovering that Paul has the Pendant of Protection. He asks if he has any ideas as to who he is going to replace Alex with? Cody just brushes his teeth and doesn’t say anything to him, refusing to give any information to Paul; but Paul feels something is up. Cody doesn’t want anyone to know he is putting Paul on the block until the Veto meeting.

Christmas thinks it is going to be Jason, but Paul wonders if she is right as he is getting paranoid. She really hopes Jason is the one nominated as it will help their team. Jason visits Cody who openly admits if he puts Jason up he will be going home as no one is going to vote for Jillian as she is no threat.

Cody shares that there are some people he needs to protect, proposing that Jason if he wins HoH next week, he cannot put up Dominique and the couples. Cody says he is going to make a move that is going to protect their numbers and take away from his. Jason smiles and says that is good as Cody feels no one will see them coming.

America is reminded to vote for the house guest they want to receive the Den of Temptation’s Ring of Replacement. Who do you want to win the temptation?

Late that night, Cody feels Jessica doesn’t trust him, but she tells him its not about trust, he is risking a lot and she needs him to protect them both. The following day, Alex calls everyone in for the Veto meeting. Alex decides to use the PoV on herself and tells Cody to name a house guest as the new nominee for the chopping block.

Cody tells the group that he has listened and not revealed anything from any of the personal conversations because he wanted to piece together who he can trust and who he can’t. He says there seems to be a common thread among them. He feels there is someone who is trying to sew disloyalty and distrust towards his game and himself and he is taking that as a personal attack.

He nominates Paul, telling him to take a seat. The pendant of protection appears on the screen and everyone realizes he got the temptation; Jillian is shocked as Paul and Cody stare each other down as Paul reveals he is safe from eviction for the next 3 weeks and Cody needs to pick another nominee. Cody tells Christmas she got screwed and to take a seat! Alex slams the box saying this Veto meeting has been adjourned.

Paul loves that Cody showed his cards and is after him; Elena is upset that Cody literally split the house in half; everyone was blindsided by Cody. Who will be evicted from the Big Brother House and who will be the next one to rise to power as the Head of Household?