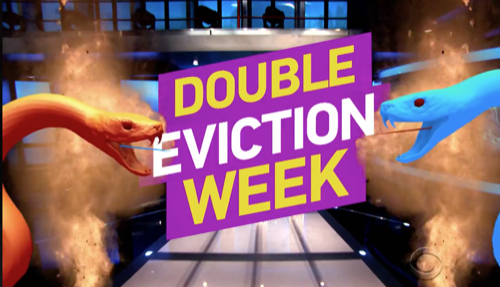 Tonight on CBS Big Brother 19 returns with an all-new Wednesday, August 13, 2017, episode and we have your Big Brother 19 recap below! On tonight’s Big Brother season 19 episode 22 “The new Head of Household moves into their HOH room.”

Big Brother Season 19 (BB19) continues on Day 51 as all the remaining houseguests (GH) celebrate that not only is Jessica gone but they are all going to end up in Jury house. Cody seems lost and doesn’t know how to describe it, he is happy Jess doesn’t need to be around these people any more but believes she deserved to go further than him in the game.

Alex is Head of Household and Raven tells Matt if Cody wins safety, Mark or Elena are up. Raven wants to target Mark and Elena because they still talk to Cody a lot and are sketchy, flip flopping throughout the game and really wants them out of the house.

Josh and Christmas talk about Mark and Elena, saying they cannot get to Alex is this week, they flip and are dishonest. Christmas tells Josh he needs to let Paul know that. If Elena and Mark convince Alex and Jason to team up and potentially bring in Cody, then they have a strong alliance and the numbers. Her and Josh decide to get close to Alex this week.

Alex doesn’t want Cody to win safety because then he can’t go home so she is trying to convince everyone to play in the temptations safety competition. Alex admits to Paul she is thinking Matt and Elena for nominations this week, hoping she can backdoor Cody; but Paul wonders if its worth the risk of pissing off 2 couples. He says Mark and Elena don’t feel comfortable, unlike Matt and Raven; so they are the better option. If Cody wins safety, then Mark or Elena go home; Alex knows Cody is a huge target but she really wants to split up one of the showmances.

Cody talks to Kevin saying he doesn’t have anyone in the game and he would never go after Alex, so for her to go after him this week would be a waste of her HoH. Kevin says everyone will be telling Alex to gun for him; he wanted to work with Cody but after he went after Josh the way he did, it puts an end to everything and hopes he goes home; but he stays talking to him on the slim chance that Cody wins HoH and won’t put him up.

Alex tells her “posse” that she caught Kevin talking to Cody and cannot be trusted as he is playing a side game. Alex feels he is being sketchy but Paul thinks Kevin will understand if everyone talks to him. Josh brings him in the HoH room and Paul tells him he has to be very careful talking to Cody because anything he says Cody will use against him; Kevin understands but feels the game is over for Cody already. Alex is having second thoughts about Kevin now.

As Mark and Jason play a game, Mark says that Paul is the only vet in the house and seems to be telling everyone what to do and everyone is following him and they both say Paul needs to go; Mark says this needs to stay between the two of them. Alex wants to put up Mark and Elena and backdoor Cody but she needs a third person just in case; Matt says he has no problem to throw the competition so he can be the special third nominee.

Out of nowhere are several different sounds happening, Paul, as the season 18 veteran knows that if there is a noise in the Big Brother house, you need to pay attention to it because its probably important. The Den of Temptation appears on the TV screen to see who is going to participate in the temptation safety game.

All the BB19 HGs go to the yard and notice there is a huge blue print of the whole BB house. Alex explains that its been extra noisy since the neighbors moved in; hopefully they were paying attention because this week’s temptation competition they will have to remember what they heard. The order of the sounds isn’t enough, because the name of the competition is “Where Were You?”

The game is simple, they need to remember where they were when they heard a specific sound from the noisy neighbors which means each of them could have different answers to each question. For every correct answer they will receive 1 point, the player with the most points after 10 questions will receive the safety of the week and the player with the fewest points will be the third special nominee.

Paul says Cody cannot win nor lose, so they can backdoor him; but Cody’s strategy is to get last place so he will be the third nominee and guarantee to play in the Power of Veto competition.

Cody is upset because he is there because Jess gave him a chance to be there and wants it to mean something. Cody feels he needs to put in people’s minds that Paul is gunning for them but isn’t sure they will believe him because they are all psychopaths. Elena is extremely happy Mark is safe this week because she thinks he is a bigger target than her but it puts her in danger of being a pawn.

Alex and Jason talk in the pantry because they don’t feel safe talking in front of Kevin. Now that Mark has safety and Matt is already sitting on the block she needs to find another person to go on the block. Jason throws up Paul’s name so he can play in the PoV for sure. Paul says he doesn’t care about going on the block as a pawn but Alex says Elena for sure; she tells Jason and Paul to decide among themselves who will go on the block.

Elena is furious that she is to be the pawn again. Elena talks to Cody and feels she is going to be the pawn again. Cody plays with her mind about how they made him a pawn and knows he needs to put into people’s minds that Paul is not on her side and she is always in the bottom of the barrel and needs to start making some of her own moves.

She is pissed and really starts believing what Cody spewing. He says that her and Mark are already targets and she leaves to think about it and talks to Paul briefly before she talks to Mark; Christmas confronts Mark on her observation of him talking to Cody and tells him not to play her with his questions and they argue about Mark and Elena who are not loyal and can’t be trusted. Mark privately admits he is playing both sides.

The nomination ceremony begins, Alex chooses Elena and Jason to go along with special third nominee Matt. She chose Elena because its nothing personal, she really likes her but its just a part of Big Brother and she chose Jason because she wants to compete in the Veto with him. She adjourns the nomination ceremony.